Kader toy factory which located near Bangkok, Thailand was a fire on 10 May 1993. It can be considered the worst-ever factory fire in history. There were 188 workers died and 469 others who were injured. Most of them were young female workers and from rural area. The factory was owned by a Thai transnational corporation, Charoen Pokphand (CP) Group and one of Asia’s largest agribusiness firms. The Kader toy factory used to manufacture stuffed toys and plastics dolls mainly planned for export to the United States and other counties. There were produced forDisney,Matteland others. The site that owned and operated by Kader has been destroyed in the blaze of fire. Kader has another two sister companies that on a contract that operated at that location.

There were several factors that lead to this fire. Firstly, the factory was designed and built poorly. Fire exits drawn in the map or building plans were not exists; in fact not constructed, and the existing exit doors were locked. Furthermore, the building was strengthened with un-insulated steel girders which rapidly lessened and crumbled when heated by the flames.

The malfunctions of fire alarms were the other factors that lead to the fire. There were four buildings on the Kader site, three of which were destroyed by the fire. The three buildings were designed a single E-shaped structure (see figure 1). Close at hand were a one-storey workshop and another four-storey structure pointed to as Building Four. Three buildings which involved in these incident Fire alarms in Buildings Two and Three had sounded and all the workers from these buildings were able to escape. Unfortunately, for Building One, the fire alarm did not sound. This part of the building was wholly committed to the storage of finished products and the fire spread quickly. The other factories were full of raw materials which also burned very quick. The fire spread extremely quickly when the Firefighters arrived at the factory, and found Building One nearly ready to collapse because of the occurrence of the combustible plastics and fabrics.

Next, although each building at the plant was provided with a fire alarm system, none of the buildings had automatic sprinklers. The portable extinguishers and hose stations were installed on outside walls and in the stairwells of each building but none of the structural steel in the building were fireproofed.In addition, Kader factory did not provide its workers with decent fire safety training and the rigid security procedures. Fire drills and fire safety training were also minimal. 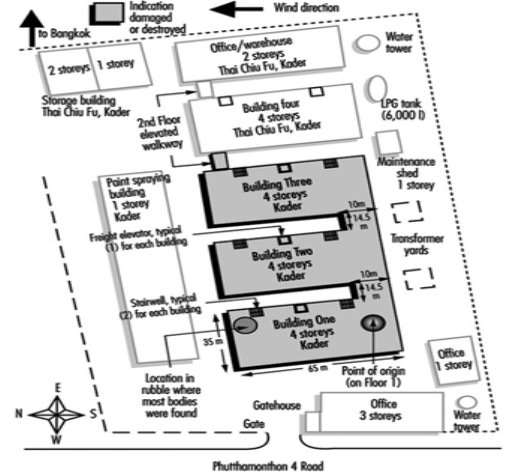 In Thailand, the Kader fire incident made a great deal for the country’s fire safety measures, especially its building code design requirements and enforcement policies. Thai Prime Minister, Minister Chuan Leekpai has made a tough action for those who violate the safety laws regarding the fire safety issues. According to theWall Street Journal(1993), Thai Industry Minister Sanan Kachornprasart is quoted that saying that “Those factories without fire prevention systems will be ordered to install one, or we will shut them down”.

The leaders, safety expert and officials said that this incident would help fasten building codes and safety regulations but unfortunately, that lasting progress is still far off as employers scoff rules and governments permit economic growth to take priority over worker safety. The fire has also attracted international debate about foreign investors’ obligation for ensuring the safety of the workers in their sponsoring country because foreign interests owned majority of the shares of Kader Industrial (Thailand) Co. Ltd. 79.96% of the Kader shareholders are from Hong Kong, 20% are from Taiwan, and only 0.04% of Kader is owned by Thai nationals.

A tragic industrial fire in Thailand the Kader Toy Factory fire was a fire on 10 May 1993 located in the NakhonPathom Province of Thailand. It can be considered the most focused worldwide industrial factory fire in history where officially 188 workers were killed, and over 500 were seriously injured, many seriously and also permanently. To avoid being burnt to death, they were forced to leap from second, third and fourth floors of the buildings. Most of the victims were young female workers from rural families. Moreover, this disaster was assumed as worst accidental that related to the loss of life fire in industry in history of Thailand.

In addition, many of the articles was pointed due to the underlying the world changes capitalist economy that causes such a tragedy accident ever. As we all know, the previous worst industrial fire at the Triangle Shirtwaist factory in New York in 1911. Despite the years between these two disasters, they share striking similarities.

In order to take the advantages of newest area of low cost labour, the company such as Kader Holding needs or should replace their operation regularly. As the result the Kader factory outside Bangkok was never intended to be a permanent structure just a temporary structure only as an instance the cheap shoddy buildings, which detected failed to achieve even the minimal Thai construction requirements, were simply packed to overflowing with workers and with their machines. Vitality safety precautions were deemed not necessary overheads.

A decade later, the condition that Thailand’s workers and other Asian countries have significantly worst. Moving into a global economy connote that products are manufactured at specific location and used at other locations end-to-end the world.Having a temptation for competitiveness in this new market should not head to settle by concession in fundamental industrial fire safety provisions. There is a moral responsibility to provide workers with a sufficient level of fire protection, no matter where they are located.

1) the government need to create an independent occupational safety and health (OSH) group with regulatory powers because the government cannot generate enough money to allow civil servants to enforce OSH laws, it is doubtful that an independent group could finance itself, because it would have to be enormous, and consequently cost a fortune, to inspect all the factories concerned. Furthermore in 2000 more than two thirds of Thailand’s factories employed less than 10 workers, who are not legally protected by the Workmen’s Compensation Fund. It is unlikely that OSH standards in these factories could be policed by an outside group.

2) Increase trade union involvement in education and participation unfortunately it is improbable that campaigns by existing trade unions could effectively improve OSH accident or incident rates, since only three percent of workers in Thailand are organised into unions – the prevalence of factories with less than 10 workers as already noted, is a huge obstacle to serious improvement in the rate of worker organisation.

3) the company should Reform the OSH laws, the proposal to reform OSH laws misses the point. In both the Triangle Shirtwaist factory disaster and in the Kader fire, death tolls were so high because the buildings were illegally built or illegally operated or both. Had the laws been followed in 1911 New York and 1993 Bangkok, the fires would not have broken out in the first place, and in the case of Kader, the building would not have collapsed before the workers had escaped. These ideas are valuable components of an OSH system, but the only effective solution is for companies and governments to tackle OSH by letting workers control their own safety. Instead of repressing independent democratic trade unions, they must instead discourage the small companies that are often sweat shops, and alternatively advocate worker participation in democratic trade unions that represent all workers, and allow workers to inspect and bargain working conditions with employers.