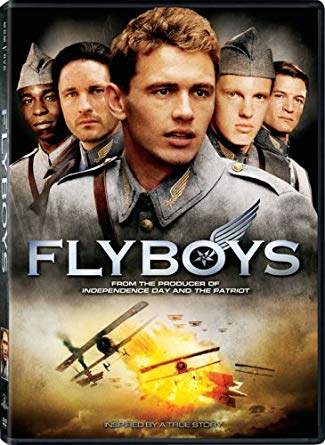 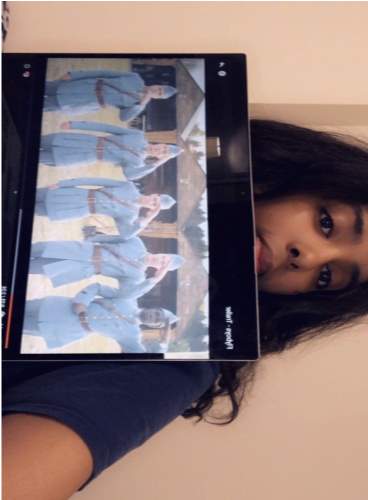 The movie I chose to watch was “Flyboys”. The movie talks about a group of Americans traveling to France to enlist in the air force during World War I before the U.S had joined. The movie revolves around a backstory, in the beginning, explaining the background of each character and why they joined. Actors and characters presented in the movie are  Blaine Rawlings (played by James Franco), Eugene Skinner (played by Abdul Salis), Reel Cassidy (Martin Henderson), Captain Georges Thenault (Jean Reno), and Black Falcon (Winbergh). The movie was released on September 22 of 2006 and directed by Tony Bill. The movie had a budget of $60 million but its gross was only $13 million. Some of the major plot points were where they all met Cpt. Thenault, where it showed us their training and learning of the airplane that normal people wouldn’t know about. Other scenes I really enjoyed were their air dog fights, Cassidy’s sacrificing his life, Rawling saving the girl he loves from the Germans, the last fight in the movie where Rawlings kill Black Falcon, and last but not least, the end where it shows where everyone ended up after the war.

I really liked the movie and its display of dog fights, for example, the dog fights where Cassidy sacrificed himself after being shot by falling into the Zeppelin, but something I disliked in the movie was that it focused too much on Rawlings and his love life rather than the actual time period and the war. The romance felt forced at some points but overall, the movie was entertaining and formative at the same time. It showed me not only what war was like, but the stories that surrounded the war. There were interactions between new and ongoing soldiers, a rescue mission, backstories, a confession and much content that truly showed the connections between people fighting in the war, either on the same side or on different ones

The time period this movie was addressed was during World War 1 before the U.S joined, specifically in 1916 because that was when the Lafayette Escadrille was formed (Stephen). During that time, World War I was between the Allied powers including Russia, Italy, France, Great Britain, Italy (switched sides), and the U.S.A (joined in 1917.) On the other hand, the central powers consisted of Austria-Hungary, Germany, Hungary, and the Ottoman Empire. The war started with the assassination of Archduke Ferdinand and by some policies and treaties between countries to protect each other. World War 1 broke out causing roughly 8.5 million deaths in total. Most of the deaths occurred because of disease rather than war deaths. The war also resulted in roughly 21 million soldiers being wounded or injured. After the war, President Woodrow Wilson came up with the Fourteen Points, it ended the war without having a winning side and a losing side and asked for European countries to give up their colonies. Unfortunately, France and England, as well as Italy, thought of this plan as being too naive because they didn’t want to give up their colonies after they went to war to keep it. The treaty of Versailles, written by the Allied powers and little participation by Germany.  They decided to disarm Germany and take some of its lands away as well as making it pay for war reparations. This time period was significant in American history because it ended the United State’s state of isolationism from the European hemisphere. World War 1 also witnessed a shift in power where most to all the European powers were shifted from the west to the east after Germany was totally weak, with no army, and having to pay for war reparations. These are some of the reasons why they should make movies about this significant time period not only in American history but world history as well.

The “Flyboys”, like any other historical movie, had historically accurate details and others not so accurate. The historically accurate details mentioned in the movie were more than the inaccurate information in the movie. Starting with the inaccuracies, most of the main characters in the movie were inspired by the Lafayette Escadrille but weren’t real characters in that time period, but rather fictional or from the author’s imagination. The main character, for example, Rawlings wasn’t an actual member of the Escadrille, he was inspired by a pilot in the Lafayette named Frank Luke, he was nicknamed “the ace of aces”. Frank Luke had some similarities with whom he inspired in the movie Blaine Rawlings, they were both really good pilots, Frank took down fourteen enemy balloons and four aircraft in only nine mission days. Unlike the movie though, Frank Luke died in battle and never had a ranch unlike how the movie portrays it where Rawlings stayed until the end of the war and went home after starting and having one of the biggest ranches. Another character that was fictional but inspired by a real character is Eugene Skinner from the movie being inspired by Eugene Bullard, they were both the first and only a few African Americans to join the Airforce. A similarity between the two characters is that they were both boxers before joining the airforce. A difference between the two was that Skinner was in the Lafayette Escadrille, meanwhile, Bullard was a famous member of the Lafayette Flying Corps, which are two different groups. One last historical inaccuracy in the movie “Flyboys” is the completely fictional character from the movie referred to as “Black Falcon”, his character is played by actor Gunnar Winbergh, there was no real life “Black Falcon” during World War 1 so this character was just added to add context to the movie and make the movie more appealing to the audience by having more action and dog fighting scenes but he wasn’t an actual real character.

Overall, “Flyboys” just like every movie had its historical accuracy and inaccuracy. Some of the characters portrayed in the movie are real and others are inspired or based off real members in the Lafayette Escadrille. Another historical inaccuracy was the wrong use of German airplanes in the movie, but they captured the Lafayette airplanes right with the right names and everything. Even Though it had its historical inaccuracy, it covered some pretty accurate points as mentioned before, the Lafayette airplanes were captured right in the movie and even some of the characters weren’t changed at all and were left with their real names and jobs in the Escadrille.