“THE OTHERS” FILM REVIEW: Make Sure You all Double Check You’re Alive.

By DYLAN B. TO 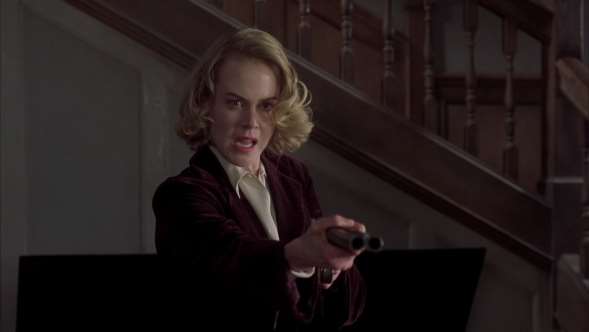 Over sixteen years ago, on Thursday August 2, 2011, Alejandro Amenábar’s The Others, was released to the public. Why exactly are we looking back on this sixteen-year-old ghost story that was awarded a very respectable 82% on Rotten Tomatoes? Because it still manages to be relevant. It tackles modern issues of domestic abuse, violence as well as challenges the formula[DT1] of an evil scary monster or ghost that haunts an individual that produces the movies we know today. In a day an age when the slated line up of horror films for the year consists of a multitude of sequels such as The Conjuring 3, Insidious 4, and Saw VIII, a movie like The Others is a refreshing watch.

The Others, an almost two-decade old film is a tantalizing ghost story that takes place in 1945 on an isolated rustic house on the island of Jersey, located in the English Channel[DT2]. However, it is curious, the mother and children, as well as the three servants, don age old Victorian attire, as well as other [DT3]elements reminiscent of its inspiration, the classic Victorian novella, The Turn of The Screw, by Henry James, such as the setting itself, as well as the plot line of deceased servants of the home coming back and “haunting” the new “residents.”

The Spanish director who wrote and directed the film, Alejandro Amenabar, (his first film in English) accentuates the horror of the film through a complex and intelligent setup. Three servants (Fionnula Flanagan as Mrs. Betha Mills, Eric Sykes as Mr. Edmund Tuttle, and Elain Cassidy as Lydia) arrive at the doorstep of the manor, where Grace Stewart (Nicole Kidman), the matriarch of the house, tells them about the lack of electricity, phone or radio in the home. Additionally, the windows of the home must be covered with heavy curtains, as well as ”no door must be opened unless the one before is closed.’[DT4]‘ Due to her young children, Anne (Alakina Mann) and Nicholas (James Bentley), both being ultra-photosensitive to a point where light is fatal to them. Thus, 50 doors, the 15 keys, poorly lit corridors, cavernous lit only by a lamp or fire places, molds a skeleton for the director to manipulate.[DT5]

Amenabar manages to pilot with this peculiar setting with incredible precision and efficiency, producing frightening context that is unveiled over the two-hour run time. The large Victorian house seems to be haunted – mysterious laughter and weeping could be heard through the walls, Anne swears she sees an unknown young boy and old woman, locked doors are left open, and a piano playing by itself.

Director Amenabar knows that what is unseen scares us viewers more than what we can, and he utilizes some of the most minimal old school cinematography techniques to enhance this: snappy tracking shots, reverse cutting, and littering the soundtrack with bellowing cellos and ear-bleeding shrieking violins – maximizing the jabs of terror and horror of the setting.

Within the first 40 minutes of screen time, Amenabar manages to produce a fog of ambiguity out of his fog machine of directorship, reminiscent of the film’s inspiration from The Turn of the Screw. Are the children playing tricks on their hysterical mother? Do the servants have some sort of hidden agenda? Is the film psychological or paranormal? Are any of the ghost in the movie as frightening as Grace herself, whose strict and borderline insane parental skills are a mixture of high-strung temperament and religious bigotry? Actress Nicole Kidman nails her performance of this unstable mix with such conviction that it adds its own element of terror to the film. The exciting moment where Kidman is ravaging through the hallways and doors, with immense rage and confusion, cocking an old shotgun is a highlight that shows her acting chops[DT6]. Her stylish and multilayered performances that can be seen in some of her recent work, gives the film some extra incentive to watch.

The film is not without flaw, however. The director’s technical direction doesn’t quite match his conceptualization. The film takes some confusing turns and is not entirely proficient in displaying the rule of thumb[DT7] of horror movies. The supernatural elements must have some sort of explanation, as the product of fear is not sold without it’s believability.

Perhaps this is the same reason the film is openly compared to M. Night Shyamalan “The Sixth Sense.” This movie’s premise, is stated clearly by Mrs. Mills (Fionnula Flanagan), the housekeeper, is that ”the world of the dead gets mixed up in the world of the living.”. Further through the story, she claims the “intruders” are bad and not to be trifled with, and yet is contradicted by her own statement in the closing of the film, ”we must all learn to live together, the living and the dead.” The methods the film uses to address [DT8]the rest of its ghostly phenomena as confusing and contradicting as those moments in the movie.

Despite[DT9]”The Others” not making complete sense in some ways, it has its fair share of pleasantries. There is something refreshing about seeing a filmmaker embrace classic and old fashion horror essentials with such care and precision. And there is a deeper satisfaction and enjoyment found in watching Nicole Kidman transcend the haunted paranormal that threatens to consume her. Her bone-chilling performance sells the product of fear that convinces even me, someone that considers himself a realist, that ghosts exist.

As I have mentioned before, the film tackles various relevancies in current times. The truth we find in the end ties to domestic abuse shown by the intense dynamic between the mother and children, violence from the context of WWII and certain qualms with religion. The flow of events generally ties back to these, in subtle ways control the plot. Due to these ties, the relevant themes add some extra meaning to the film if connected back to our current situations with war in the middle east, violence that is still occurring in homes, as well as some religious bouts elsewhere in the world.

As a film in general, The Others, though not at all plot driven, is something entirely unique from what you would see today in theaters. The craftsmanship of the screenplay, on its own sets itself apart from films such as The Conjuring, and its sequel(soon to be trilogy), that rely on the standard paranormal villainy and horror. The Others banks on the never before seen perspective of those that are the paranormal rather than those of the affected by the paranormal (well other than Casper the Friendly Ghost). The robust and engaging acting of the characters such as Kidman, and unique perspective of the film, makes this 2001 horror movie something to be seen even in this day and age.