The threat of flash flood to Birmingham, Alabama

This paper goes over what goes into the planning process of preparing emergency plan for the community.

Floods are one of Earths most common and most destructive natural hazards. Floods are not picky, they can happen in every state, territory and internationally. According to the National Geographic website, “floods do more than $6 billion worth of damage and kill about 140 every year.” There are different types of floods: river flood, coastal flood, storm surge, inland flooding, and flash floods. Flash flooding in Birmingham will be the focus of this paper. Flash floods occur when there have been heavy, excessive amounts of rainfall within a short timeframe. Flash flooding “occurs when runoff reaches its peak in less than six (6) hours, which usually occurs in hilly areas with steep slopes and sparse vegetation.” (Lindell, Prater, Perry, 2007)
Over the years, Birmingham, Alabama, has had its share of flooding. (Figure1) According to Birmingham’s Flood Mitigation and Stormwater Management Plan, “between 1995 and 2003, there have been nine major flood events… two of which were Presidentially declared disasters.” The city of Birmingham is frequently affected by flash flooding due to rising creeks and rivers caused by storms and local flooding because of inadequate capacity and maintenance of storm drainage system. (Birmingham Flood Mitigation and Stormwater Plan, 2004) According to the National Oceanographic and Atmospheric Administration (NOAA), it rains approximately 53.99 inches yearly in the city. The probability of flooding increases in the spring because additional rain causes the rivers and creeks to swell.
The city of Birmingham, Alabama, is the largest populated city in Alabama with 212,237 people. It is situated in the valley of the western foothills of the Appalachian Mountains. Birmingham, Alabama lies in the middle and on the borders of The Black Warrior river basin and the Cahaba River basin, both sub basins of the Mobile River Basin. Birmingham Flood Mitigation and Stormwater Plan say that the “general flow of groundwater is westward away from the higher points in the city” this groundwater goes into the Black Warrior and Cahaba rivers.

Birmingham has ten (10) watersheds: Cane Creek, Valley Creek, Turkey Creek, Five Mile Creek, Village Creek, Little Shades Creek, Shades Creek, Big Black Creek, Cahaba River, and Little Cahaba River. Some part of each watershed is located within a 100-year flood plain. A watershed is a land area that channels rainfall and snowmelt into creeks, streams, and rivers that eventually go to outflow points such as reservoirs, bays and the ocean, according to NOAA. The watersheds condition is an important factor in how local waterways proceed during storms.  Valley Creek, Five Mile Creek, and Valley Creek watersheds are located in a highly urbanized area. These areas are more prone to flash flooding and have suffered repetitive flooding events in the past. These watersheds have been developed into residential areas, cityscapes including The University of Alabama Birmingham and Birmingham International airport.
Urbanization of areas contributes to flooding due to replacing grass, trees, etc. with hardscapes, which impermeable materials such as asphalt. “Previously saturated areas or land covered by impervious materials, such as asphalt, will produce higher runoff rates, contributing a larger volume of water reaching the local waterways.” (floodplain management, 2019) Since Birmingham is a flood-prone area, the city joined the National Flood Insurance Program in 1981, which is a federally backed insurance program, its mission is to help reduce the impact of flooding on communities.

Because of historical flooding and recent flooding events in Birmingham, the city has taken a more comprehensive approach to flood mitigation and stormwater management.

In order to involve the community in preparedness, emergency managers should coordinate with the people, businesses and local government within the communities that are affected by flooding and other disasters.

As mentioned, Emergency Managers should work with the community to involve them in planning for disaster(s) and preparing a preparedness program. The people who have something to gain or lose in a disaster are called stakeholders. Stakeholders fall into three categories: social, economic, and government groups. The

social group is comprised of a neighborhood association, homeowners, renters and other groups formed within the community. The economic group consists of local businesses, public utilities, and telecommunications. Government groups are police/fire departments, hospitals, city council, FEMA etc. These groups help in many different ways throughout a disaster.

To prepare the community for a disaster, Emergency managers should try and get representatives from the community that is affected and works together to formulate a comprehensive plan.

In our textbook, chapter 3 goes over the planning process. Step one: planning activities, Step two: Provide a positive work climate, Step three: Analyze the situation, Step four: Acquiring resources, and Step five: Choosing a strategy. First, you will need to organize stakeholders to discuss a plan of action. Involve the community, community leaders, homeowners, businesses etc. You will need to coordinate with other agencies, i.e. FEMA, fire/police departments, National Weather Service (NWS), Unites States Geological Service (USGS), Environmental Protection Agency (EPA), Public utilities, city government, Alabama Department of Transportation (ALDOT) among others. Next is assessing the hazard/disaster. In this case history of flooding, gathering maps of flooded areas, real-time data, reasons for flooding (hurricanes, severe weather, etc. Risk Assessment is next this is a broader, more in-depth assessment of the previous. In Birmingham’s Flood Mitigation and Stormwater plan the following are what they lay out under the risk assessment category: “Overall summary of each hazard identified in the hazard assessment and its impact on the community. Description of the impact that the hazards identified in the hazard assessment have on life, safety, and health and the need and procedures for warning and evacuating residents and visitors, Description of the impact that the hazards identified in the hazard assessment have on critical facilities and infrastructure. Identification of number and types of buildings subject to the hazards identified in the hazard assessment. A review of all properties that have received flood insurance claims or an estimate of the potential dollar losses to vulnerable structures. “description of areas that provide natural and beneficial functions, such as wetlands, riparian areas, sensitive areas, and habitat for rare or endangered species. Description of development, redevelopment, and population trends and a discussion of what the future brings for the development and redevelopment in the community, the watershed, and natural resource areas. Summary of the impacts of each hazard on the community’s economy and tax base.”  Next is setting goals to be accomplished and discuss the goals with other team members. Finally, adopt the plan, revise and implement.

It’s never too late to prepare for potential disasters whether for ourselves or as a community.

Here are the steps to take in preparing a Community Preparedness Plan:

Arrange meeting with leaders in your community. These are church leaders, fire and police chiefs, city and county counsel members, neighborhood watches, local emergency management agency, business owners, homeowners, renters, hospitals, public utility companies, anyone who has a stake in your community.

In this meeting discuss what goals that need to be accomplished and set an agenda for meetings. For example, attend emergency preparedness meetings, find volunteers within the community, make homeowners and renters aware of flood insurance programs by sending out mailers, making cold calls, or even door to door.

Secondly, make sure the community is aware of the warning systems. Every member of the community should know the different types of warnings there are for each weather-related event. Do they know where the public shelters are? Are there pet shelters available? Have a plan prepared for pet owners so they will evacuate. Is there enough information on evacuation routes for the different communities involved?

As you are aware, Birmingham has had our fair share of flooding issues. We are inundated yearly with a total amount of 53.99 inches of rain. Resulting in the flooding of our neighborhoods and municipalities.

We have had nine (9) major floods events between 1995-2003 and this not including our more recent events. Two of the nine (9) floods were major enough for the president to declare it a disaster.

Not only does this hurt our fellow community members it also damages our economy. When a flooding event happens, our businesses are forced to close losing money for days, weeks and sometimes longer. This is not good for our economy.

I propose for us to join together and prepare an Emergency Preparedness Plan for our beautiful community.

Together we can put our heads together and come up with a strategic plan of action to lessen the impact on our neighborhoods and business communities. 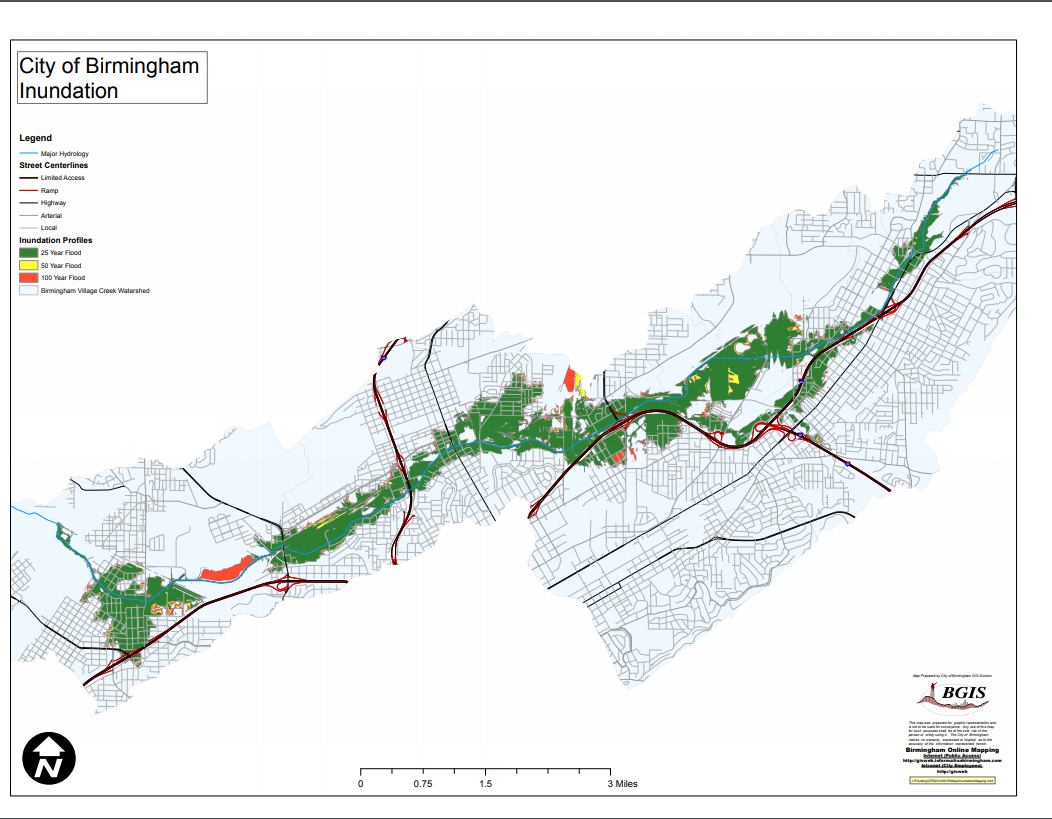