The Pacific Northwest in the Face of a Changing Climate

The Pacific Northwest, a region in Western North America, is known for its abundance of clean water, dense forests, and heavy rainfall. Due to climate change, this region is experiencing environmental changes that are putting the areas most valuable natural resources at risk. Reduced rainfall and snowpack are affecting the regions watershed quality and health, the coastal areas are being affected by a rise in sea-level and ocean acidification, and the forests are threatened by wildfires, insect outbreaks and tree diseases. As this global dilemma progresses, region-specific research will be extremely valuable in discovering divergent techniques to adapt and mitigate to the effects of the changing climate.

The Pacific Northwest (PNW), a geographic region in western North America, is known for it’s beautiful and rainy environment. There are many environmentally valuable natural resources in the PNW that are sensitive to climate change and variability. The PNW has already experienced environmental transformations due to the warming environment. This region has and will continue to experience water-related challenges, sea level rising, and widespread forest impacts. These climatic stresses will pose issues for the community and resource managers alike. That being said, awareness about these issues is extremely important while preparing for the future of our changing climate.

The most common, and undeniably most important natural resource in the PNW is the clean, fresh water from forested watersheds. A watershed is an area that drains rainfall and snowmelt into a particular water way (Miles, 2010). The different watersheds in the PNW vary in size, along with the amount of water it provides to the population. Healthy watersheds are extremely important to a healthy ecosystem, yet the watersheds in the PNW are currently being threatened by the changing climate, changes in land use, and the rising population. Issues that affect the watersheds have a large effect on the ecosystem as a whole and the species that inhabit these areas.

The PNW watersheds will be affected by the projected decline in snowpack, changes in streamflow timing, flood risks, and increasing stream temperatures. Snowpack in the cascade mountains has decreased about 20% since 1950 (Mote, 2006). With warmer temperatures, the snowpack is melting earlier in the season which affects the timing of streamflow and river ecology. The timing of the snowmelt is important because it affects ecological processes like Spring spawning, water management, and river recreation (Kruger, 2010). Also, because there will be less water flowing during the middle and end of the summer, there will be less water available to power the hydroelectric dams that are all over the PNW. The PNW powers over 40% of the nation’s hydropower and this could cause severe economic and environmental consequences (NWPCC, 2010). Lastly, the increase in stream temperature and the issue of flooding pose severe risks to the sensitive species that inhabit these rivers. The different species attempt to adapt to these changes in different ways, but this can cause ecological mismatches like the timing of the births of specific predators and prey (Winder, 2004). 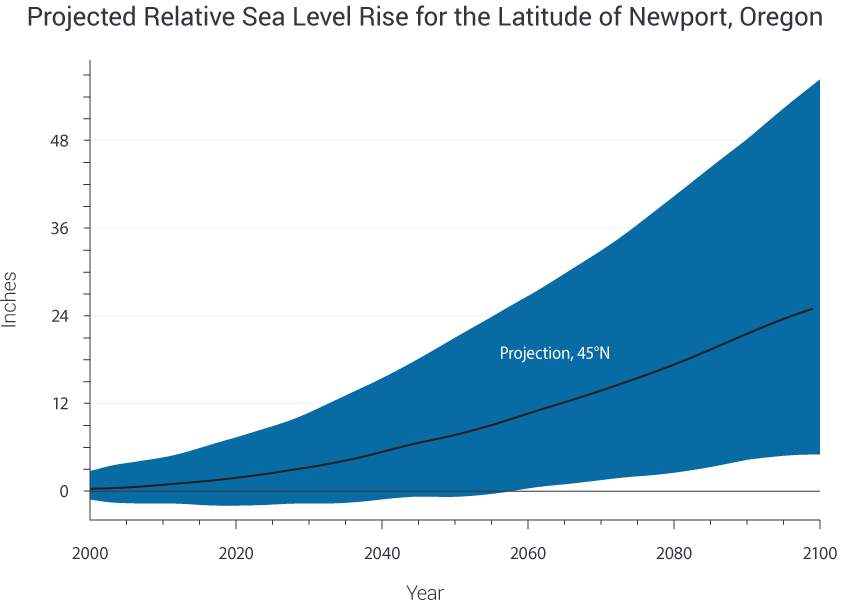 Figure 1:Projected sea level rise in Newport, Oregon based on a range of emission scenarios.

For the Coastal regions of the PNW, there are many environmental implications caused by climate change. Sea level rise, increasing ocean acidity, erosion, and threatened habitats are all issues that the coastal regions will experience. Scientists have predicted that the sea level may rise between 1.6-3 feet by 2100, as you can see in Figure 1. This includes 140,000 acres in the coastal region that are within 3.3 feet of high tide (Strauss, 2012). That being considered, there are many cities in the PNW that are at risk of falling below sea level, like Seattle shown in Figure 2. This will cause sensitive areas like wetlands, tidal flats and beaches to degrade in quality because of the inability to shift inland due to the topography, eventually jeopardizing the species that inhabit these areas.

Figure 2: Regions of Seattle that are at risk of falling below sea level. In the Northwest, the oceans are some of the most acidified in the world. Ocean acidification, which is a continuous decrease in the oceans pH, can have dire consequences for the species that inhabit these waters, like pacific salmon and oysters (Winder, 2010). This acidification can inhibit shell growth in marine animals and is thought to cause reproductive issues in some fish (Kruger, 2010). The rising temperatures in the ocean can cause harmful algae blooms that can progress ocean acidification as well . Finally, increased erosion and flooding along the coastline will pose issues for local infrastructure and public and private properties (Strauss, 2012). The way that resource managers respond and prepare for these changes will determine the future of this region’s ecosystem health and the possibility of salvaging local commerce that depend on the ocean.

Another aspect that the PNW region is known for are the dense forests that cover most of the land. The evergreen coniferous forests of the PNW support all kinds of wildlife and fish species, sequester and store carbon, protect many watersheds, support local economies and provide recreational activities for the communities. These forests are being threatened by the changing climate in many ways including increased wildfires, tree diseases and insect outbreaks (Mote, 2010). Unfortunately, the effects of the changing climate on the forests are already apparent and will only continue to get worse. Forests cover over 50% of the land in the PNW and the changing climate presents serious issues to the ecosystem and community alike (Litell, 2010). Figure 3: Projected increase in forest area burned based on a 2.2 degree fahrenheit increase.

The wildfires in the PNW have already been accelerated in the last few years. In 2015, Oregon and Washington had the most severe wildfire season after 1,600,000 acres were burned throughout the season (Doerr, 2015). Also, in 2015 Oregon and Washington experienced their hottest year ever recorded. The warmer and drier conditions have increased the amount and range of the wildfires since the 1970s (Doerr, 2015). Figure 3 shows the projected increase in area burned if there was a 2.2 degrees fahrenheit increase in temperature. As you can see, some areas are expected to experience a 700% increase. Not only will this affect the species that inhabit these areas, but also the communities that are located in and around the forests. Figure 4: Areas in the PNW that have been recently burned or affected by insects and disease.

Tree diseases and insect outbreaks in the PNW are being accelerated by the drought periods and warmer conditions, as shown in Figure 4. Mountain pine beetles cause tree mortality by laying eggs under the bark of pine trees, introducing a type of fungus that inhibits the trees ability to repel beetles. The fungus also stops the tree from being able to transport water and nutrients, eventually killing it (Litell, 2010). These beetles are becoming more common in the drier areas of the PNW, and as the temperature continues to increase, suitable habitats for pine beetles will increase in area. In some areas, the beetles are expected to start dying off around the 2060’s when temperatures will exceed the pine beetles threshold (Litell, 2010). Even so, the pine beetles wide-spread effects will play a huge role in shaping the PNWs ecosystem in the years to come.

In order for the PNW to combat the current issues being caused by the changing climate, local and federal governments, law-makers, citizens, and resource managers alike will have to work together in order to spread awareness and find solutions. In the watershed and snowmelt dilemma, management techniques combined with substantial water resource infrastructure will be key in adapting to the changing climate. In regards to ocean vulnerabilities, the coastal communities’ responses to sea level rise and erosion will largely impact shallow water and estuarine ecosystems. Lastly, impacts on forests can be reduced through management techniques like surface and canopy thinning. As this global crisis continues to affect the environment every day, continuous and region-specific research, like this, will be extremely important in finding adaptation and mitigation techniques that will actually make a difference for the future of the planet.