The Wheal Jane incident was a significant mine water discharge event. The incident occurred in 1992, shortly after the mine closure. This report provides a brief description of the mine, the incident itself and the resulting aftermath. 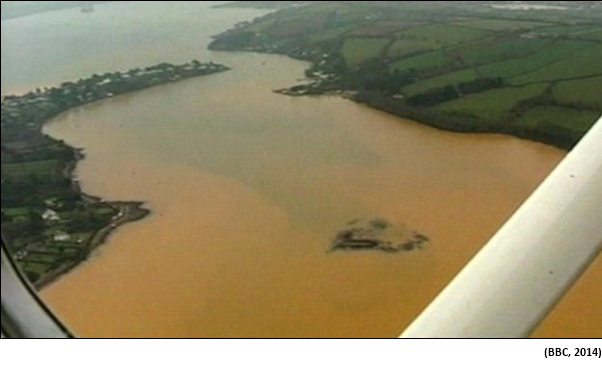 Wheal Jane Mine is located near the village of Chacewater, in Cornwall. The mine itself was formed in 1861, after the merging of five smaller mines. The oldest mine workings from the area were thought to date back as far as the 1740s (Cornwall Calling, 2017). The mine had worked many mineral lodes over its lifetime, producing tin, copper, and silver-lead (Cornwall in Focus, 2017). In the years leading up to its closure, the mine was primarily extracting cassiterite, the main source ore of tin, but older workings also produced pyrite and arsenopyrite, with the modern development drives taking the mine to 450 meters below surface level (University of Exeter, 2002).

The mines of the Gwennap parish were all interconnected, with Wheal Jane connected to the neighbouring, working mine Mount Wellington, and to the abandoned workings of United Mines. Wheal Jane was an extremely wet mine, requiring dewatering measures in the region of 60,000 mÂ³ day-1 in the winter months. The pumped water was highly acidic, owing to the dissolved metals from the sulphide mineral deposits. Approximately half of pumped water was treated before being discharged into the Carnon river (Bowen, Dussek, & Hamilton, 1998). Wheal Jane Mine had been working, on and off, from this time until its eventual closure in 1991 due to financial difficulties, primarily relating to the low price of tin, following the International Tin Agreement in 1985. Much of the mine’s infrastructure and equipment was sold off at the time of its closure, with the mine’s operational dewatering systems being turned off after a government grant subsidising the pumping costs was withdrawn (University of Exeter, 2002).

After the mine closure, and the cessation of the government grant, the operational dewatering pumps were switched off, leaving only the tailings dam pumps remaining. With the dewatering measures stopped, the water level rose and filled the expansive voids underground, with the sulphide mineral bearing rock now being leached by the rising ground water. The NRA (National Rivers Authority, now part of the Environment Agency) was concerned of the potential of Acid Mine Drainage (AMD) into the Carnon river and commissioned a survey to determine the potential impact of a mine water discharge, and its likely discharge points and timing. The investigation proved difficult to predict due to the unknown volume of connected, un-surveyed mine workings which would also need to fill before release (Bowen, Dussek, & Hamilton, 1998). The NRA continued to monitor the water levels and water quality throughout the year.

On November 17th 1991 the mine water levels reached 14.5 m AOD, and a mine water discharge event occurred through Jane’s adit. The water treatment lagoon onsite was quickly overwhelmed by a flow of approximately 5,000 mÂ³ per day of AMD at a pH of 2.8 (Bowen, Dussek, & Hamilton, 1998). The NRA had contingency plans in place and immediately reacted by adding lime at the head of the adit to raise the pH and precipitate the metals from the mine water. A plug was constructed near the portal of Jane’s adit and the water pumped out into the tailings dam (University of Exeter, 2002).

On January 4th 1992 a technical issue meant that the pumps to the tailings dam were stopped. The mine water levels quickly rose by an estimated 4 meters. The mine water built up and, on January 13th 1992, discharged through the Nangile’s adit, which was the second lowest known discharge location after Jane’s adit. This released an estimated 50,000 mÂ³ of AMD (pH of 3.1) into the Carnon river over a period of 24 hours, flowing through the Restonguet Creek, Carrick Roads and into the Fal estuary (Bowen, Dussek, & Hamilton, 1998).

The mine water also contained considerable concentrations of heavy metals, most significantly being the presence of over 600 parts per billion Cadmium (University of Exeter, 2002).

Following the discharge, new pumps were installed by the owners to pump water from the adit directly into the tailings dam as a short-term solution.

Monitoring after the incident proved that the effects of the mine water discharge proved to be short-term only, with the NRA stating that ‘There appears to have been no major adverse effects from the incident on the biota of the estuary.’ (National Rivers Authority, 1995). However, it was clear after the event that the mine water could not be left unchecked, and thus a water treatment solution was proposed.

The PPTP contains three different treatment streams, all containing aerobic reed beds for removal of Iron and Arsenic, an anaerobic cell for removal of zinc, copper, cadmium and iron by bacterial reduction, and an aerobic rock filter which removes manganese through growth of algae (University of Exeter, 2002). The three streams differ however in the pre-treatment. One stream is first treated with lime to raise the pH, the second is first passed through an anoxic limestone drain, and the third stream involves no pre-treatment at all ( CL:AIRE, 2004). A report into the performance of the PPTP found that it offered inconsistent performance, and water discharge commonly exceeded the permitted water quality guidelines. The PPTP was also only processing 0.6 l/s of contaminated water, <1% of Wheal Janes total discharge ( CL:AIRE, 2004).

The active treatment plant took over from the PPTP in 2000. The process involves the addition of lime to increase the pH, and flocculant to precipitate out the metals in solution. The metal precipitates form a sludge, which is sent to a hold tank, and onto the tailings dam. The treated mine water is discharged out into the Carnon river. This system treats an average of 200 l/s, at a metal removal efficiency of 99.2% ( CL:AIRE, 2004).

Whilst there have not been any significant long-term environmental impacts from the incident, it serves as a stark reminder of the potential environmental disaster that can come from mining activities, particularly from historical mines which were not subject to the same environmental regulations that are in place today.