Energy security is making sure there is enough electrical supply for demand based on a price which is not too volatile. In order to make certain of the energy security for the future governments around the world are introducing new plans to reform their current strategies. In the UK it has an Electricity Market Reform which is said to attract 100 billion GBP. (DECC, 2016a) Increasing energy efficiencies, maintaining reliable networks, and increasing connectedness of nearby countries will all lead the way to making sure we are sufficient for the future. Commitments from governmental commitments further strengthen this resolve for example the EU renewable energy directive of 15% energy consumption of 20% by 2020.

This form of renewable energy uses the flow of air from the wind to rotate a turbine which generates electricity. The equation to calculate the power through a square metre is given below which in turns shows that the power is proportional to the velocity of the wind and as shown by Coley (2008) as you increase in height above land the faster the wind speed is which is why wind turbines are increasing in size:

DECC (2013) are predicting an annual growth rate of 13% for onshore wind over the next decade with 11 GW capacity currently under or awaiting construction and in planning phase. For offshore up to 18 GW could be available by 2020. 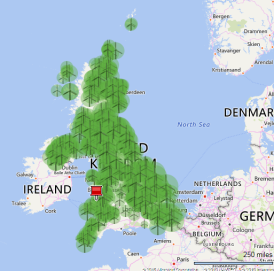 Wind can be predicted with a margin of error but is difficult to store so other technologies are needed to compensate it.

This renewable source stores energy in the form of gravitational potential energy of water with two reservoirs. During high demand water from the top reservoir is released and goes through a turbine which generates electricity. The top reservoir is recharged during times of low demand. It can be used to reduce the amount of start-ups and shutdowns and maintain a steady balance between supply and demand.

Pumped Storage hydro is the most flexible source of power generation available, it can meet demand within minutes.

According to Owens (2013), there are around 50 pumped storage hydro plants that have a capacity of ~1GW. The world’s largest is Bath County Pumped Storage Station which has a capacity of 2.7 GW.

Unlike a dam a PSH has little damage to an ecosystem in comparison. The flooded area would be best suited in a low organic content area. 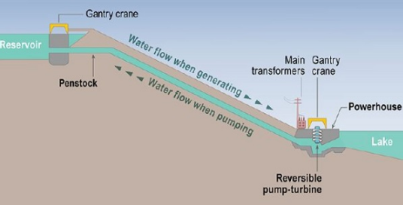 According to DUKES (2016), the total electrical generation from hydro in 2015 for the UK was 6.3 TWh. 7.5% of the renewable generation was from large scale hydro. 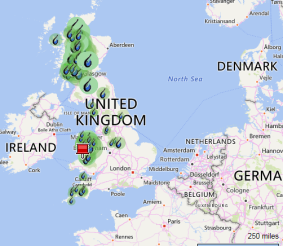 PSH is one of the few large scale renewable sources which gives an affordable means for storing while generating low cost electricity carbon-free. It has the ability to generate electricity based on demand instantaneously.

23 GW of PSH capacity is undergoing construction with 8.3 GW announced for the future in the UK. (Scottish Renewables ,2016)

In the US there are currently 40 PHS plants in operations totalling a capacity of 22 GW which accounts for 95% of all the energy storage in the country. 50 more PSH projects have been proposed which could increase the total capacity by 40 GW. (U.S Department of Energy, 2015)

Different storage systems have been used in other countries like pumped hydro energy storage (PHES), thermal, battery, and hydrogen storage. Pumped storage has been found to be the leader due to its high capacity, flexibility, and availability. (Al Zohbi, et al., 2015)

Scottish Renewables (2016) shows that 97% of world storage capacity is from PSH.

The are several other methods of which can be combined with wind energy (e.g. hydro, conventional thermal, gas). Pumped storage has the advantage of always having available power even during dry period. (Montero & Pérez, 2009) 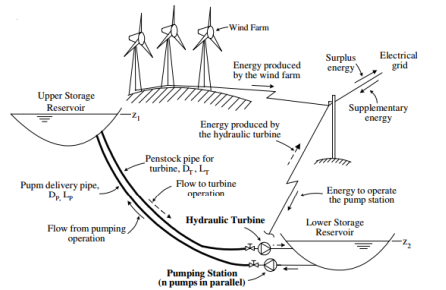 According to Ingram (2016), Germany are currently undergoing a pilot project for wind and pumped storage hydro. There will be four wind turbines installed and a 16 MW pumped storage unit on the Kocher river. This will give a fast response to the grid and reduce costs of electricity for the consumer. The 4 wind turbines will be commissioned by the end of 2017 and the PSH plant will be operational by 2018. 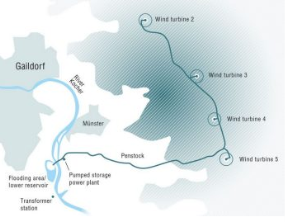 A pumped storage system composed of 4 turbines and a 11MW wind farm has been built in one of the Canary Islands which will meet 80% of electrical demand. (Al Zohbi, et al., 2015) 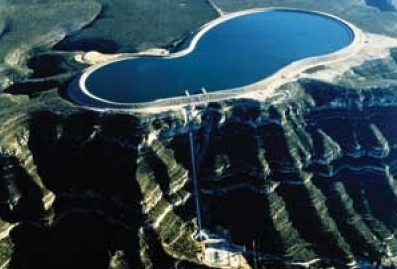 The concept of a 10MW wind farm installed in the Faroe Islands combined with a pumped storage plant. The reservoirs will be connected at Miovatn (upper reservoir) and Vatnsnes (lower reservoir) which could give a capacity of 10MW. The cost of the storage plant is estimated to be 5.7 NOK/kWh. (Nordon Energy Research, 2013) 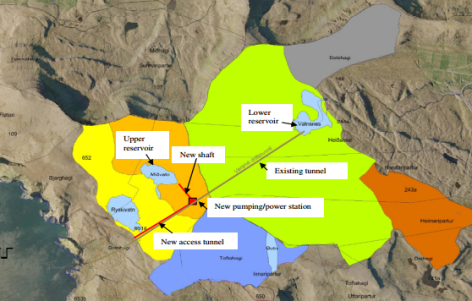 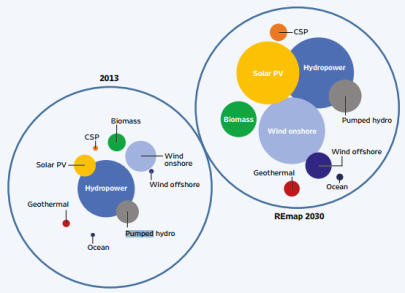 A disadvantage with PSH is it is very capital intensive with long development and construction times. The main contributors being the infrastructure of the hydro plant and second to this is the electro-mechanical equipment. According to IRENA (2012), the total installed cost ranges from $1000 – $3500/kW. This may also increase by an additional $3500/kW due to the cost of connecting to existing transmission networks; this depends from location to location.

An electrical system which can become more flexible could save the UK consumers billions per year. Flexibility can come from interconnection of other electrical systems, for example wind and pumped storage hydro (PSH).

The European Commission has set a target of 10% electricity interconnection for 2020. They are building towards a more ‘integrated, competitive and sustainable common energy market’. They have put forward a European Energy Programme for Recovery (EEPR) mainly because of the economic crisis and with this have identified interconnection projects across the EU and to date spent 650 million EUR. (EuropeanCommission, 2015)

The German Advisory Council requires 42 GW transmission capacity between Norway and Germany by 2050 to make PSH able to balance renewable electrical generation in Germany. Germany has a goal of 80% renewable electricity by 2050. (Ingebretsen & Johansen, 2014).

Norway possesses ~50% of the reservoir capacity in Europe. Norway provides 98% of its electricity from hydroelectric plants. Stone (2015) says that Norway could be a potential ‘Green Battery’ for the EU but is restricted due to political and social issues. However, it has been announced that a 1.4 MW 740 km link will join UK and Norway costing $1.64 billion which will be operational in 2021.

The Global Energy Interconnection Development and Co-operation Organization (GEIDO) is a Chinese group with a goal of an Asian super grid by 2050. There are now agreements between energy companies in China, Russia, Japan, and South Korea. They have highlighted geopolitics as a main obstacle for grid interconnected stability and assumed that there will be access to the newly developing ultra-high voltage lines which operates at 1000kV AC and 800 kV DC over 1000kms. (New Atlas, 2016) 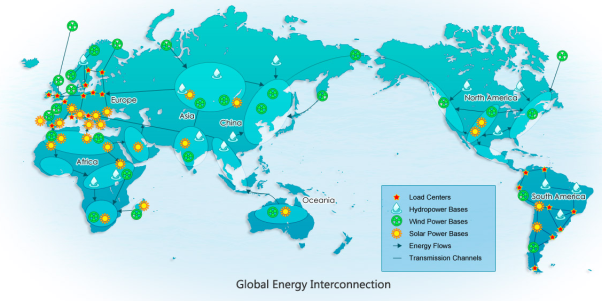 A disadvantage of interconnectedness between countries is shown in Andrews (2015). During the summer time our demand is assured however during winter time when electricity demand is at its highest there is a potential for other countries to take the supply leaving another without electricity (such as brownouts, blackouts, and overloads).

Wind and PSH will prove to be a necessity for providing energy security in the future. Wind is given an added benefit when combined with PSH of increased electricity usage by transferring energy at times of low demand. PSH is a mature and proven technology and gives the ability of supplying electric on demand within minutes.

The future of energy security also relies on the interconnectedness of nearby countries; connecting to Norway is seen as the most beneficially for supply of renewable electricity in the EU. However, on a global scale the geopolitical and social aspects between countries could be deemed as problematic and will need to develop if interconnector capacity between countries is to prosper. 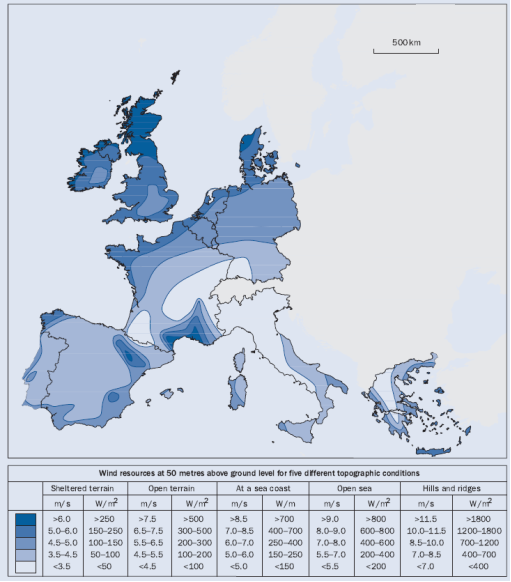 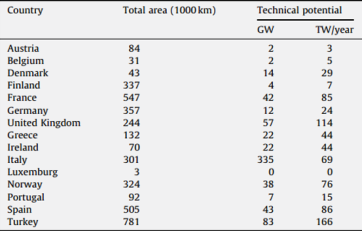 EUROPEANCOMMISSION (2015) Energy Union Package: Communication from the Commission to the European Parliament and the Council. [Online] Available from: http://eur-lex.europa.eu/resource.html?uri=cellar:a5bfdc21-bdd7-11e4-bbe1-01aa75ed71a1.0003.01/DOC_1&format=PDF [Accessed: 21st December 2016]

EWEA (2009) Wind Energy – The Facts: A guide to the technology, economics and future of wind power. London, UK: Earthscan.