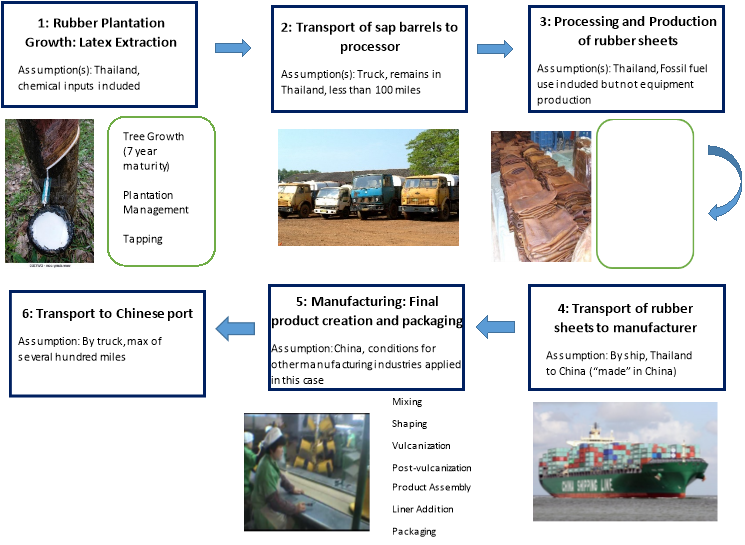 A hypothetical situation was created to symbolize a likely life cycle for a pair of Joules brand rubber boots. Therefore, Thailand was chosen as a source of natural rubber as one of the world’s largest producers. China was chosen as the Joules company website clearly states their products are “handmade in China”. I contacted the company to see if they could give me information on the location of their manufacturing facility but they could not divulge this. Transportation distances are based on locations of busy forts, shipment through the Suez Canal, and appropriate distances from major ports to smaller retailers within the UK. Another assumption is that these boots are made of 100% natural leather with chemical inputs rather than a mix of synthetic and natural rubber to make the life cycle less complex. Greenhouse gases are considered for processing facilities and transportation but not the footprints of the construction of these facilities and equipment. Also, it is assumed the boots are not recycled or reused and instead, immediately disposed of in a landfill. The working conditions of factory workers in the manufacturing of this product are not specific to the creation of this particular project but the industry overall and facts concerning the presence of rubber in landfills pertains to all forms of rubber (dominated by tires).

Step 7: Shipment of product to the UK

(I chose not to include treatments and additional waterproofing coatings sometimes added, but they can contain chemicals potentially leading to air and water pollution.)

Forrest, M. (2015) The composition and nature of vulcanisation fumes in the rubber industry – A technical review. Progress in Rubber, Plastics and Recycling Technology, 31(4), 219-264.

Jiaxing and Yangon. (2015) The future of factory Asia: A tightening grip. The Economist. http://www.economist.com/news/briefing/21646180-rising-chinese-wages-will-only-strengthen-asias-hold-manufacturing-tightening-grip [26.2.17].

Kaiyoorawong, S. and Yangdee, B. (2006) Rights of rubber farmers in Thailand under free trade. Project for Ecological Awareness Building. http://wrm.org.uy/oldsite/countries/Thailand/Rights_of_rubber_farmers_in_Thailand.pdf [27.2.17]

Powell, B. and Skarbek, D. (2004) Sweatshops and third world living standards: are the jobs worth the sweat? The Independent Institute. http://www.independent.org/publications/working_papers/article.asp?id=1369 [5.3.17].