The word ‘Noise’ is derived from the Latin word ‘nausea’ which means feeling of sickness at the stomach with an urge to vomit. Disturbing or excessive noise that may harm the activity or balance of human or animal life. The source of most outdoor noise worldwide is mainly caused by machines and transportation systems, motor vehicles, aircraft, and trains.

What is Noise Pollution?

The pollution of noise can be caused by natural processes or by human activities.

The chief causes of road traffic noise are the number of road vehicles and their high traffic speed. Faster moving vehicles produce high noise from their gear box, exhaust system, vibrations from their body, etc.

The noise from rail traffic is comparatively lower than that from road traffic. Introduction of diesel engines or electrical engines has reduced the intensity of rail traffic noise which was previously shown by steam engine. Besides use of welded tracks and improved coach suspension have contributed to the reduction in railways noise,

Larger and faster aircrafts produce high noise intermittently during take-off, landing and during flight. Noise generates from compressor and turbine and near jet exhaust. Jet engines create most noise around a radius of 16 km. Sonic boom is an important aspect of aircraft noise. Sonic boom occurs when an aircraft flies supersonically overhead.

The different machines of numerous industries, factories and mills produce a lot of high intensity sounds causing noise pollution. Some industrial processes like weaning, ship building, boiler making, pressing and blasting operations are nosier than others.

The operations in pneumatic drills, milling machines, cutters, printing press with an upward, downward and sideways movement and vibrations, cause lowering of hearing capacity to a large extent.

The noise pollution is further magnified due to the installation of industries in compact places. For example, the workers near the heavy industrial blowers in steel industry are exposed to sound of 112dB for eight hours and hence suffer from occupational pollution.

This type of noise includes antisocial activities of neighbours like using of loud TV, stereo, radio sets, jazz music, fireworks parties, playing of children, barking of dogs, neighbourhood brawls out of intoxication and industrial neighbourhood noise etc. The machines used in house construction like concrete mixes, vibrators, bulldozers, heavy diesel lorry, building demolition activities also add to the noise pollution. Noise is air-borne mechanical energy striking the human eardrum. A sound of 65dB is the noise level for conversation heart at a distance of one meter. A sound of 125dB (A) gives the sensation of pain in the ear and 150dB (A) might kill a human being. If a noise of 90dB in the mid-frequency range reaches the ear for more than few minutes, then the sensitivity of the ear is reduced.

The various effects of noise pollution on human beings may be classified in to two categories: 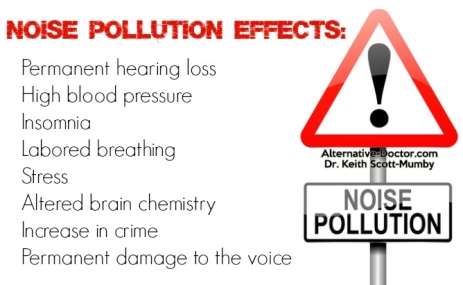 The impairing of hearing which may cause immediate auditory fatigue finally leading to deafness is known as auditory effects.

These effects include interference with speech communication, annoyance leading to ill-temper, bickering, mental disorientation, violent behavior and a series of health hazards.

We have already discussed the sources of noise of different intensity and their hazardous impact on living organisms particularly on man. Still we work and live in the environment where the noise level is not optimum. Thus it is rightly told by Robert Koch that noise pollution is a slow agent of death. The peoples working in areas where the intensity of noise is comparatively higher suffering from progressive hearing loss, physiological (health) and psychological hazards including tension. The maximum permissible noise levels at different are summarize. 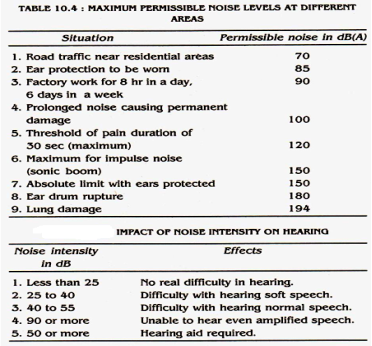 Prevention and Control of Noise Pollution: 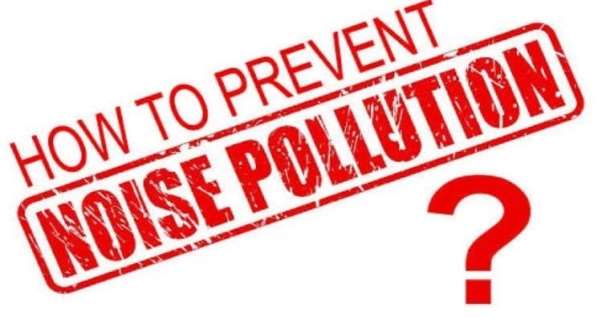 Noise produced from different sources has created a catastrophe to the entire living world specially to man. Hence, necessary steps should be taken to minimise the level of noise thereby protecting the living world from its detrimental effects.

Few methods of minimising noise pollution are discussed below:

The level of noise pollution due to industries can be lowered down by adopting the following techniques:

(a) Use of improved technique:

The noise at source can be reduced by replacing noise producing machines with suitable improved technique. For example, the noise from exhaust fans can be decreased either by increasing the number of blades or by decreasing the rotational speed.

An insulating material may be applied on the noise producing machinery and equipment’s which causes sound proofing.

The level of noise can be minimised by covering the walls of the room by sound absorber (e.g. acoustic tiles), introducing gaskets around the doors and windows, sealing all the outlets and putting carpet, drapery and acoustic materials inside the room.

Plants and trees should be planted along highways, streets and industrial areas because the vegetation covers absorb and dissipate sound energy and acts as a buffer zone.

The use of ear plugs or ear muffs or even cotton balls by the worker in the industry can protect them from hazardous effects of noise pollution.

Noisy industrial operations should be conducted at open spaces far off from residential areas.

(g) Use of Building codes:

Certain codes should be enforced which require sound proofing in the construction of industries, buildings and apartments.

The community noise control includes minimization of noise from air traffic, transport system, building constructions etc. The noises from the above sources can be lowered by adopting the following procedures:

(a) The air traffic noise can be reduced either by suitable technique or by zoning the area around the airport and not allowing for the construction of houses or industries within 10 meters of the airport.

(c) The loudspeakers, radio and music system should be operated at threshold intensity so that the noise level should not be hazardous to living organisms.

(d) Public awareness should be created to educate the common man about the harmful effects of noise pollution, through radio, television, newspapers etc.

(e) The noise can be reduced by introduction of new regulations which mainly include lowering speed limits and designing for non-stop operation.

(g) The laying of ballast less tracks reduces the noise level due to railways.

(h) The noise pollution can best be controlled by promoting education and research.