Human Population growth and the effect on natural resource consumption

In the last 50 years the world population has grown faster than ever before, and in many countries and regions of the world this population growth and the consumption of natural resources resulting from this growth is becoming a matter of great concern for governments and international development agencies (World Bank. 2004). National populations are expected to grow in every countries of East, Southeast, and South and Central Asia except Japan and Kazakhstan, populations will double or nearly double in Pakistan, Nepal, Bangladesh, Afghanistan, Cambodia, and Laos, growth rates will also be particularly high in India, Indonesia, Iran, Malaysia, Mongolia, Myanmar, the Philippines, and Vietnam (Asia Population, 2013). This implies an enormous concern for the reason that population growth represents more consumption, depletion, contamination and use of natural resources. This essay aims to discuss the population growth crisis, specifically the relationship between population growth, environmental sustainability and ecological impacts due to human intervention on environment.

In 1798, Thomas Malthus studied the nature of population growth in Europe, he claimed that population was increasing faster than food production, and he feared that eventual global starvation may become unsustainable on the years to come (Malthus, 1798). Several researchers still debate this theory, nevertheless, it is clear that the patterns of consumption and degradation of resources are directly related to population growth and human consumption of natural resources both in developing and developed countries. Some authors doing research about human population growth argue that a key component to achieve sustainable development is to slow population growth by helping couples to limit their family size (Public Health Reports 1992). However, birth control and population management is not the only strategy required to reduce population growth. Population growth control is not only effective by introducing birth control mechanisms, is it also important to recognize that the medical and scientific advances represents a huge and significant factor regarding population increase. To elaborate, there have been over the years enormous developments on the reduction of infant mortality rate, for instance, mortality rate has dropped significantly compared to fifty or sixty years ago and the control of diseases such as cholera, malaria and dengue are becoming more effective every day, adults rate expectancy is increasing and adults are extending their life expectancy by several years than they used to achieve decades ago. As a result, a greater production and consumption of resources is necessary to sustain the population, and it is unclear whether the food production is capable of growing as fast as population growth is able to grow in the modern world. Environmental problems can be classified according to the nature of the damage to human health (Holdren and Ehrlich, 1974), the authors argue that Environmental problems are usually a direct effect of wrong human interactions and resource exploitation. Common and every day diseases (lung disease due air pollution, lead poisoning and so many more) are the direct consequence of human activities, the pollution of coastal waters, the acceleration of erosion in agricultural soils are the result of human activities and global degradation on environment. One of the most important problems that requires observation is food production and soil fertility because this kind of degradation is a direct consequence of human activity. Soils increasingly lose their ability to store nutrients and be productive in their cycles, Water consumption for crops also becomes higher and less sustainable, and production is constantly decreasing, resulting in a threatening an irreversible damage to the environment. One example of this problem is the alteration of areas in the lush of the Tigris and Euphrates Valleys through erosion and salt accumulation, consequence of bad irrigation practises and systems (Thorkild and Adams, 1958 ), the Rajasthan desert in India is also a perfect example of the human pressure on the environment. Another example is the pressure to expand agricultural areas, leading to damaging efforts to cultivate land that is unsuitable to cultivation, such as the expansion of cultivation on hillside in Indonesia, leading to serious erosion and new environmental problems (Ravenholt, 1973). Countless examples of bad agricultural practises can be found around the globe, the techniques of temperate-zone agriculture to the tropical soils of Brazil, leading to the loss of the soil nutrients and erosion can be found in South America (McNeil, 1972). Coastal regions are also affected by the human consumption and mismanagement of resources, impacts due the human activity are evident, the mismanagement of waste disposal, water mismanagement, metals and fertilizers residues and oil spills, harmful pollutants hurled to marine ecosystems, mining, CO2 emissions, greenhouse emissions, and many more harmful environmental practices can be found on different parts of the globe. The New technologies, achievements and developments in the last hundred years concerning agriculture are not resolving these environmental conflicts in a small period of time, for this reason it is urgent to find creative solutions to address these issues and achieve sustainability in order to create a consistent solution to the population growth concern.

According to naturalist Sir David Attenborough (BBC, 2010) there are three favourable ways to get sustainable development; first: stop consuming so many resources, and one of the theories is that developed countries should stop using so many resources in order to allow developing countries to meet their demand for resources, An example of this is the production methods of food that many developed countries have on countries like China and Africa to meet their own needs and to export and sustain their own population, causing a enormous demand problem in production that constrain this developing countries (Developing countries need to meet their own food supply requirements and at the same time they have to produce extra supplies to meet the demand from foreign countries using their land). The Second proposal by Attenborough, is the change of our technology and production methodologies by using alternative methods of agriculture and energy production. It is a fact that the struggle to minimize the use of fossil fuels and promote the use of clean renewable energies is a difficult and constant effort, however an embedded question comes to attention: is the use of clean energy affordable to implement in developing countries? The cost and resources are not yet clear to respond that question. The third proposal presented is about reducing population growth, and to reduce population growth education is also essential. Education on contraceptive methods and access to effective birth control systems are basic especially in developing countries where resources are scarce and population growth worsens the circumstances to access basic needs. It is evident that developing countries are more commonly the ones to have more population growth worldwide (refer to table 1 and chart 1 appendices) and this increase in population is the direct cause of many of the numerous environmental problems in those countries.

It is clear that population growth has a negative impact on the environment, the intensification of agriculture, the uncontrolled industrialization and economic growth, the depletion of resources and the destruction of natural habitats is evident and undeniable in our current world. For this reason it is necessary to implement intelligent and concrete strategies to minimize the impacts and effects of environmental degradation. There is an urgent need to look for real development solutions and sustainable policies to maximize the use of resources without degrading the environment’s capacity to restore it self and simultaneously obtain a balanced assessment for the impact that humans perform on the planet. Human capacity for improvement and technology opens daily windows and doors to new sustainable solutions that can generate substantial changes in the levels of production, conservation and renewal of ecosystems and resources. Governments are required to achieve improvements and find ways to be more involved in environmental issues, seeking to improve the quality of life, health and livelihood of their populations through viable and sustainable solutions for the correct use of resources. It is the responsibility of governments, communities and every person on the planet whether living in a developed or developing country to find solutions and alternatives to benefit not only current generations but also future generations to come. Human carrying capacity must not reach its limits before finding solutions to actual problems, human influence and positive technological advances and current developments on issues such as environment must be a permanent strategy to minimize the ecological footprint of humans on resources. Proper Education, correct land management, technological improvements, economic investment, proper resource management and awareness, and better public policies regarding natural resource management are crucial and vital elements for the development of communities and poverty eradication around the world. 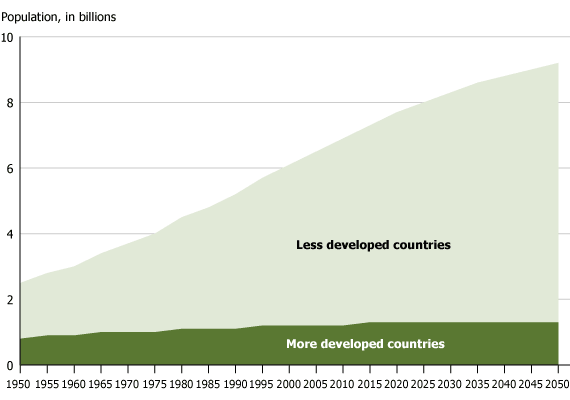 MALTHUS, T. 1798. An Essay on the Principle of Population, London, Printed for J. Johnson, in St. Paul’s Church-Yard.