We humans cannot envision when a regular calamity happens, and more often than not, when a natural disaster happens it brings a lot of wreckage and demise. Recent events show that a significant increase in number of natural calamities for natural and human made reasons which could have potentially very huge consequences on infrastructure. If those infrastructures fall the chain of accidents could lead to a catastrophic situation, and can affect the environment, the economy and people. This paper will focus on the study of the impact of natural disaster on infrastructure. This paper will analyze the methodology of assessing the risk regarding natural Calamity on critical infrastructure through the analysis of cascade effect. This paper will analyze a series of proposals to reduce the risk of such events.

Rationale of the Study

Major objectives of this research are given below.

According to Chen and Mark (2010), critical infrastructure is a series of complex system that involves production, Transportation, health, communication, safety and all the teams that is society needs to run. Now any destruction of this complex system or affect the overall economy as well as the working structure of the word. The potential sources of affecting the infrastructure can come from natural causes, technological causes or human origin causes. The disaster can also be triggered by a simple mistake which has a big consequence over the environment. And those risks can combine with each other to lead to an event complex situations where the consequences are even bigger. Natural reasons involve earthquakes, tsunamis, volcanic eruptions and other natural emissions including floods, hurricanes, tornadoes, storms and climate change. On the other hand, the technological list on infrastructure involves fire, explosion, pick toxic chemicals release and other mechanical explosions that can affect infrastructure. And finally, the human cause two reasons involve human error, defect in design, carbon emission by human civilization that can lead to Natural disasters and many other (Showalter and Myers, 1994). 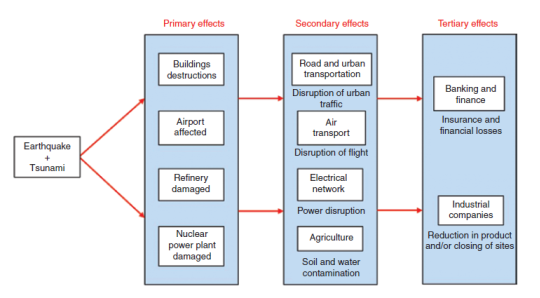 Figure: Infrastructures Damaged by the Effects of the Earthquake.

According to Birregah, Muller and Châtelet (2011), earthquakes are one of the main reasons that do more harm to infrastructure than any other natural events. But earthquakes don’t kill people, buildings do. They describe the effects of the 7.9 magnitude earthquake in 2008 in China where the main cause of death and injury was because of the collapse of a building due to earthquake. During this event, a lot of industrial facilities, where houses and buildings have destroyed and because of the destruction of those infrastructure a lot of people died and injured. On the other hand, a 9.0 magnitude earthquake occurred in Japan in 2011 who is causes a powerful aftershock that gave rise to a huge tsunami who treats several miles in Japan. The earthquake and tsunami destroyed the overall infrastructure in the country including roads, Bridges, ports, railways, buildings and other infrastructures. And because of the earthquake more than 28,000 people were dead or missing which created a havoc. Because of the earthquake and tsunami, the nuclear plant in Fukushima, Japan was destroyed the creating more disaster because of nuclear radiation. These also created a total blackout in many regions in Japan during the time (Krausmann and Cruz, 2013). This example shows how the combination of natural disasters and technological event can occur simultaneously and affect a whole country’s Industrial infrastructure thus leading to social crisis. 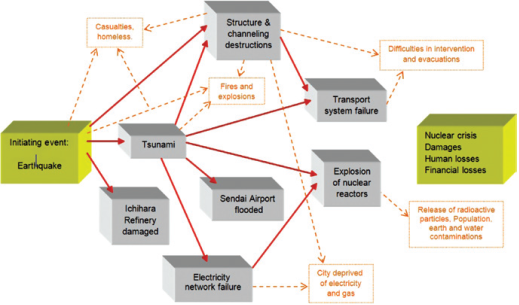 Figure: The Accident Sequences Generated by the Earthquake.

A natural event can also cause a chain of events that can lead to a complete destruction of a country’s infrastructure. The figure above shows how an earthquake give birth to a series of events that can completely destroy the critical infrastructure of a country. For example, if we consider the destruction of supply because of the chain event caused by an earthquake it can be found that the earthquake can produces a huge shock wave that create a tsunami and that can destroy the Nuclear Power Plant which produce energy. And because of the destruction of the nuclear power plant the whole country can face a complete blackout. And it takes a lot of time and money to rebuild the infrastructure destroyed by the natural disasters.