Agricultural activities are often affected by the weather. Weather is unpredictable as it changes from time to time. As the agricultural activities affected, the crops or the outcome of the agricultural activities would be affected as well and this caused the income of the farmers to be affected or causing the investors to lose money. Therefore, weather derivative is needed to protect the farmers and investors. So, this research is all about modelling and pricing of weather derivatives where the weather is based on the daily average temperature in Malaysia. In this research, there are two main objectives which include the modelling of temperature and pricing of weather derivatives. To complete this research project, there are 10 stages to be gone through. The details about the stages would be discussed in the methodology of this research.

The model used to model the movement of daily average temperature in this research would be the stochastic fractional Brownian motion. This model is chosen because based on the past researches, this model fits the data well and successfully modelled the dynamics of daily average temperature. From this research, the daily temperature is expected to be modelled and described by the stated model well. Besides that, the pricing of weather derivatives will be encountered as well. Through this research, it provides a lot of advantages. For example, it provides a better idea in the process of modelling the temperature and the pricing method of weather derivatives. The outcome from this research can be used as a reference for future researchers that do research in this field.

Since the agricultural derivatives are getting more important, more financial researchers are doing their research on the pricing of weather based derivatives. Norton (2010) stated that the weather derivative is a way to share the risk for farmers in developing countries. Malaysia is lucky enough to be located in the equatorial region. Hence, the weather in Malaysia is hot and humid throughout the year. Therefore, in Malaysia, the crops are only affected by the daily average temperature and the amount of rainfall. Of course, there are catastrophes that happen in Malaysia too, like flash flooding, acid rain or drought. These catastrophes in Malaysia caused the damage to all the crops. But, the main problem that could affect the crops in Malaysia would be the amount of rainfall, the daily temperature or humidity. Hence, in Malaysia, to structure a weather derivative, it is easier as compared to other four season countries because the weather factors that taken into account are lesser. Moreover, there are lack of people doing research in this field, thus, this research is quite important as to solve the agricultural problems.

There are actually a lot of researchers had done their research about the weather insurance or derivatives. Some of the models used by past researchers include temperature modelling, Black-Scholes model, Time Series models, Brownian model, Ornstein-Uhlenbeck model, Esscher transformation and more.

, the price of the insurance contract can then be now determined by using the formulae

where the expected value of the claim size

Indicates the end of the period where insurance starts paying. The formulae of P(t,

) is a standard method to price the weather related insurance or derivatives.

For burning analysis approach, it is firstly introduced by Jewson and Brix (2005) as a classic method in pricing weather derivatives. The payoff

of the burning analysis approach is based on the empirical distribution of the sample data collected. While the mean value of observations of the sample data is used to calculate the price of the contract. The next method introduced by Jewson and Brix (2005) is the index modelling approach, and Taib and Benth(2012) modify a little bit of the model where the past claims

are fitted into a distribution and the expected value of the distribution is used in pricing the contracts. Lastly, Taib and Benth (2012) proposed a new model where the changes of the daily average temperature are modelled using the autoregressive,

Besides Taib and Benth (2012), Campbell and Diebold (2003) also uses time series model to model and forecast the daily average temperature in certain cities of America for the purpose of weather derivatives. While Chang, Lin & Shen (2009) constructed a theoretical model to price the weather derivatives and this is the extended version of the model of Cao and Wei (2004). In the research paper of Chang, Lin & Shen (2009), the estimation value of future Heating-Degree Day(HDD) and Cooling-Degree Day (CDD) is predicted by using Mote-Carlo simulation and they successfully utilize the time series temperature model in Campbell and Diabold (2003). Mills (2009) also uses time series model to model the current temperature trend of Central England. In the research of Mills (2009), it is suggested that three other alternative ways could be used to model the temperature trend, which is the parametric stochastic trend model, the non-parametric local trend fit, and a low-pass filter. These 3 alternative techniques had been discussed in Mills (2003) and Pollock (2007).

Other than time series models, other models were used by other researchers in pricing of weather derivatives. For example, Lee and Oren (2009) suggested a model of equilibrium pricing of the weather derivatives for various commodities. This model is built where the risk averse utility function is optimized by the agents, including the weather derivatives that have been issued. There are two types of agent. The first type is the farmers where they obtain the profit with the exposure to weather risks while the second type of agent is those financial investors where they hope to diversify the financial portfolio. Therefore, later in 2010 and 2011, Lee and Oren with Härdle and Osipenko simulate the realistic market conditions to get the equilibrium price for weather derivatives. This equilibrium pricing method of Lee and Oren is actually based on the research of Cao and Wei (1999) where Cao and Wei generalize the model of Lucas (1978) and include the daily temperature as a fundamental variable.

Svec and Stevenson (2006) uses Fourier transformation and stochastic Brownian motion (SBM).They proposed a more generalized stochastic Brownian motion to model the temperature, that is, the stochastic fractional Brownian motion (FBM). The model proposed take account the low-frequency variability of weather where the SBM does not. The difference of the SBM and FBM is that the FBM included a continuous-time Gaussian process depending on the Hurst parameter. This research paper concluded that the Monte-Carlo simulation overly forecast while the autoregressive moving average (ARMA) time-series model under forecast the monthly accumulated Heating-degree Day (HDD) and Cooling-degree Day (CDD). They also concluded that the models they use in the research have better estimates than that of the Campbell and Diebold (2003) model.

(b) Objective of Research

There are two main objectives in this research, that is:-

(i) To model the daily temperature based on the analysis of daily average temperature in Malaysia by using stochastic fractional Brownian Motion.

(ii) Pricing of the weather derivative. 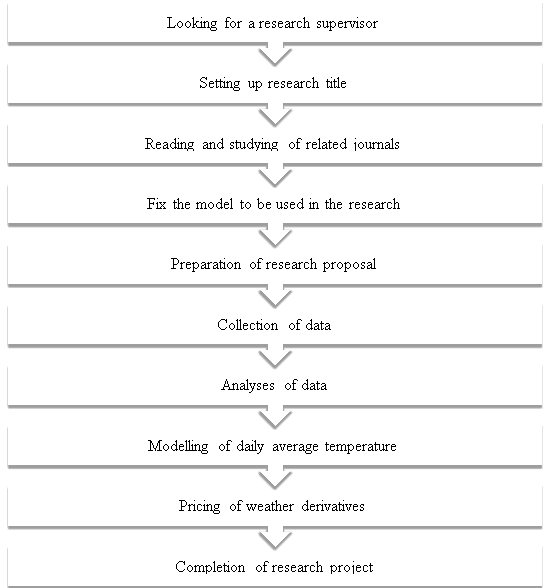 In this research, the model to be used in modelling the daily average temperature is the FBM. The FBM that will be used is as follows:

This model was chosen because out of a few models studied in the past research papers, it is one of the best model that fits the movement of temperature. In this FBM, it consists of several components. That is, the mean reversion process, the Ornstein-Uhlenbeck process and the fractional Brownian process which is a continuous-time Gaussian process. Besides that, the model used also included some seasonal and trend factors. With the combination of this few process and factors, it makes the stochastic FBM more efficient in describing the movement of temperature.

As the fixing of the model is done, preparation of research proposal would be the next stage and it is now pending for approval by supervisor. After the proposal of research is done and it is approved, collection of data begun and then analysis works will be started. Analyses of data enable the temperature to be modelled by the model fixed in the earlier stage. In this research, the model to be used is the Stochastic Brownian Motion. Hence, the eighth stage is the modelling of daily average temperature using Stochastic Brownian Motion. After the modelling, pricing of weather derivatives can be start doing and finally, after the pricing is done, the research project is finished up and completed.

3. Impact on Society, Economy and Nation

Since in Malaysia, it is lack of researchers doing the research about the pricing weather derivatives, so, this research of modelling and pricing of weather derivatives gives some small impact on the economy. One of the impact is that it improves a little bit of the economic conditions of the agricultural field. As mentioned previously in this research, agricultural activities are affected a lot by the weather and agriculture activities are one of the largest activities in Malaysia. Hence, by doing this research, the forecasting of temperature can be done based on the modelling of temperature. With the forecasting of temperature, it can help the farmers to be aware of their crops and come out with a better strategy to handle and prepare for the worst. Of course, the forecast results might not be accurate, but, with the guides provided from the modelling and forecasting, it helps to reduce the risk of losing the money, be it the farmers or the investors. This helps to prevent the farmers from stop doing agriculture activities. So, by doing this research, it indirectly affected a little bit on the economic condition of the agricultural field.

Cao, M., Li, A. and Wei, J., (2004). Precipitation modeling and contract valuation: a frontier in weather derivatives. The Journal of Alternative Investments 7: 93- 99.