Table 1. Bird Preferences and χ2 Summary. Each bird specie’s respected preferences for habitat and seed type are shown, as well as χ2 results. The most frequently observed bird was the Tufted Titmouse, which recorded 290 visits in total (class). The frequency bar graph in Figure 1 shows a visual of each bird species preferred type of habitat. The x-axis is defined by the different site categories (open, closed, and edged) while the y-axis is labeled as the frequency of visits. There is also a legend in the figure that differentiates the species of bird by color. As shown in Figure 1, there is a vast difference between the number of closed site visits compared to edged and open site visits. In the edged and open sites, very few birds were observed relative to the frequency of visits in the closed canopy site. On the contrary, in the closed site, each species of bird accumulated at least 100 visits (Figure 1). The least frequently visited site by all the birds was the edged site. According to the class data, there were 469 closed canopy site visits compared to 46 edged site visits and 109 open canopy site visits (BI 107 Section B8, 2019). Clearly, the data collected supports the idea that these birds of interest located in the Hammond Woods compliment the ideas of the optimal foraging theory.

Figure 1. Frequency of Bird Visitations to Each Canopy Site. The amount of bird visits to each site is recorded and graphed as a bar graph; each bird species is color coded with the legend provided. 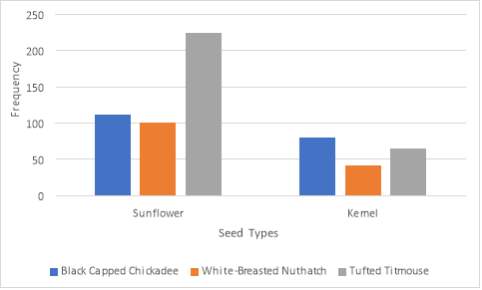 As demonstrated in the collected data, all three species of birds preferred sunflower seeds when given the option between two feeders that held either sunflowers or kernels. As displayed in Figure 2, the x-axis is defined by the type of seeds that the feeders held, while the y-axis is the frequency of visits to each feeder. There is also a legend in the figure that differentiates the species of bird by color. The tufted titmouse demonstrates the largest difference in preference between the kernels and sunflowers, heavily favoring sunflowers as the seed type (Figure 2). According to the class data, there were 438 sunflower feeder visits compared to just 186 kernel feeder visits (BI 107 Section B8, 2019).

Figure 2. Frequency of Bird Visitation to Different Feeders. The bar graph illustrates how many birds visited sunflower feeders or kernel feeders; each bird species is color coded with the legend provided.

The main objective of this study is to examine the foraging behaviors between avian species of the Hammond Woods and to determine whether our data is significantly different, which will prove that the birds have a preference in food type and habitat type. More specifically, the goal of this experiment is to analyze what type of food (seeds or kernels) and habitat (open, closed, or edged) different birds prefer and to determine whether their behaviors agree with the optimal foraging theory. We initially hypothesized that if birds were to follow the optimal foraging theory, then they would prefer a closed habitat and sunflowers as their food source. Evidently, our results strongly support this hypothesis. The birds preferred closed canopy sites due to the lack of risk factors concerning predators; they also preferred sunflower seeds due to the optimal handling time. As shown in the results, each species of birds strongly favored sunflower feeders and closed canopy sites.

Frankly, the optimal foraging theory proposes that organisms will forage so that they minimize their energy and risk factors while maximizing energy intake and consumption (Spilios and Kieswetter, 2019). With this being said, our data strongly supports our hypothesis. The data collected slightly reflects the experiment conducted by David N. Bonter, Benjamin Zuckerberg, Carolyn W. Sedgwick, and Wesley M. Hochachka. In their experiment, their objective was to quantify the daily foraging patterns of black-capped chickadees, tufted titmouse, white-breasted nuthatches, and houses finches during the winter to test models of the optimal foraging theory. However, rather than studying food and habitat preference, they analyzed when their feeding habits occurred. Using radio-frequency identification receivers built into feeding stations, they were able to quantify and record the activity of the four species of birds. Their results yielded the conclusion that the birds foraged before sunrise and continued at a steady to increasing rate throughout the day until sunset. This suggests that their energy levels were drained by the end of the day; it also shows that the birds are driven between the risks of starvation and predation, which all supports the theory that the birds will continue to forage until they burn a certain amount of stored energy (Bonter et al, 2013). This experiment’s results are significant to our data because it shows how the same species of birds optimize their foraging efforts in various aspects.

Additionally, Liam Dowling along with Frances Bonier developed a theoretical model that would estimate and predict distances at which a parent bird will flee from its nest in response to an approaching predator. They set up the model by estimating the parent bird’s fitness with relation to its characteristics, the nest, and the incoming predator; this developed a scenario that could be tested to see whether the parent would stay or go. Essentially, they were able to develop a basis that would explain the variation of flight initiation distance among nesting species, such as birds (Dowling and Bonier, 2018). This relates to our own experiment because it demonstrates that there are various reasons and biotic factors that influence a bird’s choice of habitat. In our case, most birds were comfortable with foraging in the closed canopy sites most likely to reduce their chances of being preyed on.

Our data also doesn’t take into consideration the effects of other biotic and abiotic features. For example, our experiment does not consider if weather or the time of day affect the birds’ foraging habits. This would provide more context to the birds’ foraging habits because more data (relative to the experiment) would be gathered to support or refute the hypothesis. Additionally, it would be interesting to observe the effects of hanging feeders at different heights, which could be performed in a future experiment. These factors should all play a role in the birds’ optimal foraging strategies because it will examine how they value risk factors, handling time, and energy intake. The overall conclusion that this experiment elicits is that the optimal foraging theory is applicable to various species of birds (black capped chickadee, white-breasted nuthatch, and tufted titmouse) that were observed in the Hammond Woods of Newton, Massachusetts.