Coalition for Environmentally Responsible Economies (CERES), a non-profit organization was founded in 1989. Its objectives include encouraging ethical and sustainable business practices and promoting investment policies which are environmentally, socially and financially sound. It has created a group of world’s largest companies and investors who are responsible to take care of the environmental issues. 100-plus companies and many Fortune 500 businesses like- General Motors, Polaroid, Body Shop International, Bank of America, are engaged with Ceres for supporting clean energy policies and maintaining a strong climate. Financial organizations and Environmental groups like Sierra Club are members with Ceres (Coalition for Environmentally Responsible Economies (CERES), 2016).

Ceres aims at making companies understand the concerns of the planet’s future. Meeting the sustainable challenges of the 21st century is important along with running business. Ceres works on making the environment more sustainable and therefore it follows all the laws that comes under the Environmental Laws and Regulations of the U.S. government.

On the account of the Exxon Valdez Oil Spill that happened in the Gulf of Alaska in March 1989, Ceres came up with its core Ten Principles. These principles aim to protect the earth, its energy and resources wisely; reduce waste and doing business in fair manner. The principles and its aspects are as follows: 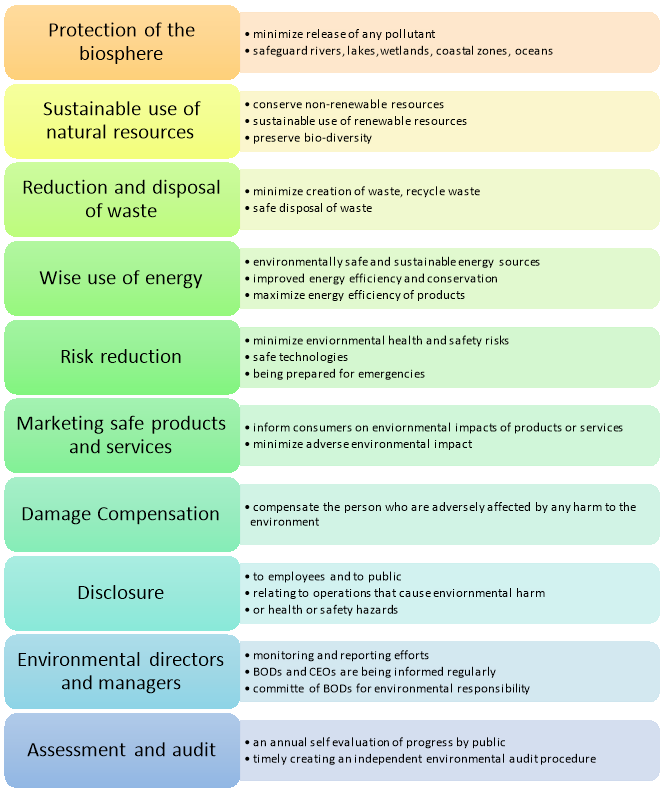 There are several issues addressed by U.S. Environmental Protection Agency(EPA). Some of them include- limitation on air pollutants, enforcement of clean water and laws on safe drinking. EPA works for implementation of these federal laws so that the environment does not get affected by business practices. Ceres works along with EPA in implementation of the laws.

Ceres makes sure companies and investors follow the strong climate and Clean energy policies in the US and abroad.

One of the CEOs of Ceres- Mindy S. Lubber joined U.S. Environmental Protection Agency (EPA) in 1995. She joined it as a senior policy advisor and has achieved recognition as a ‘regional administration’ under President Bill Clinton in 2000. She has also been a president at former National Environmental Law Center. Her efforts include-

Ceres along with WWF assembled a group of 100 large companies which supported the Paris Climate Agreement. It also supports the Clean Power Plant which was an initiative by Obama administration. Ceres strongly supports Clean Air Act(Business Is Taking Action on LGBT Rights. Will Climate Change Be Next?, n.d.).

In the ‘Six Proactive steps’ that Ceres has made for insurance companies, for addressing the climate change, it mentions about the ‘Greenhouse gas emission’, in favor of Federal and International Policies which limit its emissions. It addresses the threat of change in the climate because of carbon pollution (Insurance, n.d.).

Ceres mostly works for sustaining the environment and limiting business practices for better future. It supports laws that relate to maintaining environment standards. Therefore, there aren’t many laws that are being opposed by Ceres. Rather there are a couple of them which are addressed as below.

It opposed the President’s and Congressional Leader’s abandoning of Methane rule and the Clean Power Plant. Ceres believes that these laws were made to support the environment. There are many companies that has made an agreement in support of the law. And so, Ceres does not want such laws to get abandoned.

It also shows its disagreement with the President’s ‘two-for-one’ executive order which requires deletion of two federal regulations against any one issued.

Ceres’ major goal lies in influencing business and its practices which affect environment. It has made many huge contributions which has helped business to follow the standards and become effective in their practices. The contributions by Ceres which impacted companies include-

Ceres made an evaluation of its member companies and found that most of them have adopted policies based on International norms and fewer companies have adopted sector-specific policies. In the evaluation, most frequent instituted policies include those related to bribery and corruption and elimination of discrimination along with overall sustainability of environment. Companies which adopted the international standards like International Labor Organization(ILO) and United Nations’ Global Compact (UNGC), show understanding of sustainability issues and are committed in implementing changes in their business (Corporate Policies and Management Systems, n.d.).

Ceres resolved an issue on United Parcel Service (UPS)’s Lobbying Disclosure. It laid down points which the BOD of UPS requires to disclose in their report. “Indirect lobbying” and “Grassroots lobbying communication” are the points covered under the solution. These points include efforts at the local, state and federal levels.

Along with this, we already saw that Ceres has laid down its core 10 principles which are in favor of environmental protection. Business and stakeholders adhere to these aspects and make sure that they are abiding by the rules related to these policies. It tracks shareholder’s resolutions and considers the following issues:

The shareholders make such resolutions. This ensures that they make proper implementation of the laws. On studying the resolutions, the legislatures can make laws that depend upon the environmental standards.

Ceres aims at transferring the way corporations integrate environmental and social risks into their decision-making. By 2020 Ceres wants major companies which re its members to attain these standards. The areas in which more companies should come forward include – Product and Services and Supply Chain. Ceres looks forward in making greater attempts at helping companies in achieving the goals of sustainable environmental business practices. 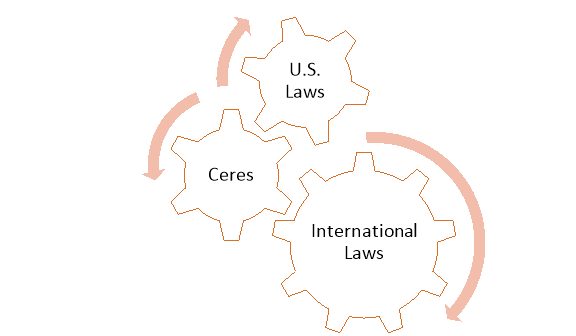 Ceres an organization works majorly in line with the International Laws on Environmental protection. It supports U.S. laws as well about certain policies. Ceres helps implementation of the following laws of Unites States Federal Environmental Statutes-