The question as to whether peat stratigraphy could be used as an archive of past climate change was unresolved in the 1970’s (Aaby, 1976). Peats where used as sedimentary archives from which only pollen could be extracted. However, it was long believed that peats growth was cyclical. Due too scientific advances within theories and techniques peat can now be used to derive many variables that are inherent within the structure of peat bogs and hence the study of peat embodies a library of characteristics that show different variables through-time, relevant to climate changes.

Peat can be accurately used to reconstruct past climatic conditions. This is shown through changes in colour from lighter to darker which indicates wetter or drier shifts (Barber et al, 2000). When observed the colours within peat can indicate the composition of what climactic variables were during its accumulation. A lighter coloured peat would be associated to an environment cooler in temperature with more precipitation and darker peat with more high percentage of organic material present and would show a warmer climate with less precipitation (Chiverrell, 2001). Additionally, due to the absence of Oxygen within waterlogged peat bogs, the peat becomes preserved this in-turn can be studied due to how well preserved peat bogs remain through-time.

The principle of palaeoclimatology is the study of climatic changes on Earth, in regards to the Earth’s history as a whole. Palaeoclimatology can be used through many various proxy methods to obtain data preserved within; sediments, rocks, tree rings, Peat and testate amoebae.

The aims of the multi-proxy investigation into Holcroft Moss were to;

Holcroft Moss, Cheshire, is located 10 miles west from the City of Manchester and is found just south of a major motorway the M62 (Figure 1).

The site itself is a site of Special Scientific Interest (SSSI) since 1991 (Natural England, 1991). Managed and owned by the Cheshire Wildlife Trust on behalf of Natural England. It is essential to best preserve this site as much as possible, due to this Cheshire Wildlife Trust have added wildlife such as cattle and sheep to constantly maintain the arena through grazing whilst also actively clearing trees and shrubbery to maintain the water table to a stable level (Cheshire Biodiversity, 2008). It is crucial that the site is kept waterlogged to varying degrees as this helps contain levels of carbon within the site and the carbon does not leech out into the surrounding environment. Correct preservation of carbon within the peat bog itself permits for an analyses that still abides by the law of uniformitarianism, allowing for good data to be collected with regards to previous climatic activity.

Holcroft Moss has been studied since the 1960s in order to better understand past climatic changes, this was first done through the study of pollen within the site but through scientific advances and-time many of these first case studies have been discredited because these early techniques are not up to the standards of modern day, technological quality and methods. The information from data collected during the 1960s and 1970s is not as reliable as more recent studies.

Four data sets where collected to then in turn be analysed. Pollen preps where done for students upon for the interpretation of data. Standard procedures were followed for the laboratory preparation and analyses of pollen, Humification, plant macrofossils and XRF samples (Moore et al 1991, Blackford & Chambers, 1993) where followed.

Table 1 shows eight sections within a 100m core taken from Holcroft moss in October 2014. These eight sections where divided by the group and studied for their various different characteristics. These eight sections show with in them, transitional phases inherent to the peat bog. The light brown layers indicate poorly humified peat showing, a wetter, cooler climatic shift indicating a time with more precipitation. The darker brown areas and black parts within the 100m core show a warmer climate with less precipitation and possible influences from another source around the environment of the peat bog. 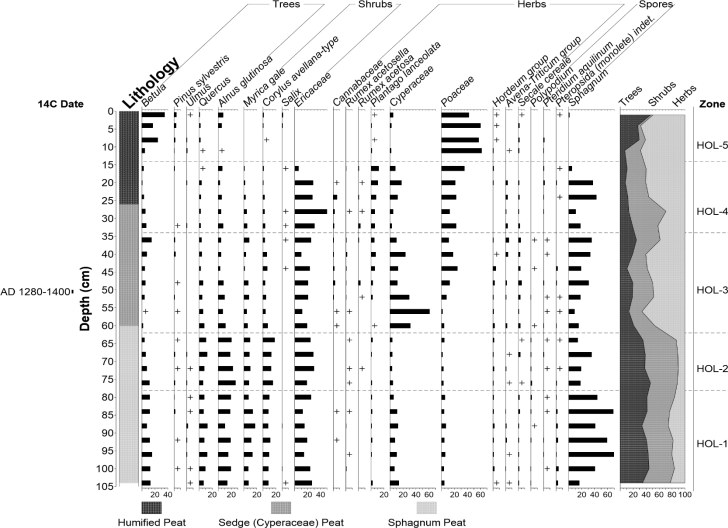 The pollen diagram has a radiocarbon date at 50cm depth and the pollen results can be used to determine an age for the upper part of the profile. Pollen studied has been expressed showing the percentage (%) of total land pollen. The pollen analysis is split into five zones (HOL- 1-5) and percentage of tree, shrubs and herbs is represented throughout these zones which can also indicated the type of climatic environment the peat bog inhabited.

Hyalosphenia Subflava associated with a drier climate and a lower water table spikes throughout 15 -25cm. This species decreases from 25-30cm where Arcella Discoides competes and is frequently found in percentage (20-80%) throughout the depths of 25-85cm.

Hyalosphenia Subflava reoccurs after 20-25cm and is the dominate species of testate amoebae found throughout 30-50cm, 55-60cm and from 75-100cm. Other testate amoebae which can be found throughout 30-75 cm are; Assunlina Muscorum, assulina seminulum, archeralla flavum and archerella wrightianum in varying amounts all competing with each other, some of these Testate Amoebae are more suited to the conditions of a wetter higher water table such as; Archerella Flavum however, others at the depth of 35-70cm prefer a drier low water table, such as; Assunlina Muscorum. Many of these species reduce in percentage after a depth of 75cm for Hyalosphenia Subflava to become the dominate testate amoebae species found in Holcroft Moss which indicates a drier climate with a lower water table. 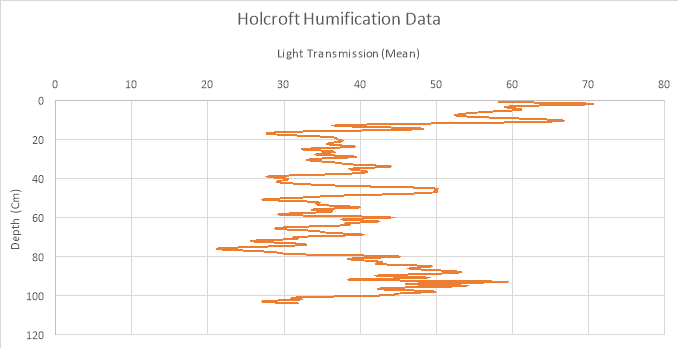 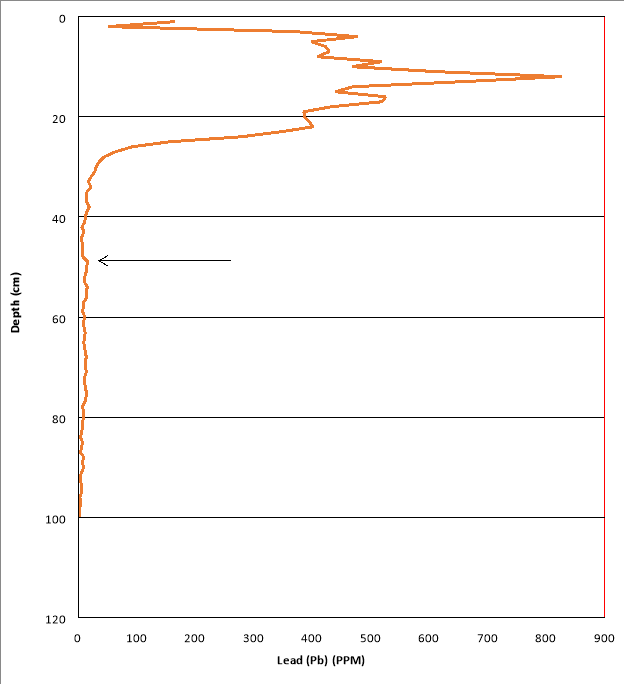 Figure 5 shows low levels of lead (Pb) within peat. From 1880 AD and earlier, there are only minor amounts of Pb found within the depths of 30-100cm. However at 30-0cm the peat shows a much higher concentration of Pb this is around the time of 1880 AD (the industrial revolution). After this time Pb concentration found within Holcroft moss increases up to 800+ PPM for 92 years (1972) after this Pb concentration declines into 200 PPM for current day.

To further understand the palaeoclimatic reconstruction from the peat bog located at Holcroft Moss, the proxy data is combined, and considered from all the proxies data studied. This allows for a clearer, more incise data set shown rather than a singular proxy was only studied like in the 1970s (Barber, 2009).

Data from the multi-proxy study into Holcroft Moss and the past climatic changes throughout a 100cm core taken shows representative evidences which allows for the correct interpretation of these data sets to allow for a better evidence in understanding past climatic changes. For example, figure 3 and 4 give insight into corresponding wet and dry climatic shifts, this is shown through testate Amoebae species and through the Humification of peat samples from Holcroft Moss.

To correctly analyses wet and cool climatic shifts Humification data (figure 4) allows for the interpretation of light transmission. Throughout this data set there are indications to a wetter climate with more precipitation throughout the poorly humified peat this is found throughout 0cm-18cm and also from 80-105cm. Poorly Humfied peat suggest a cooler climate due to the high levels of light transmission found throughout these areas of the sample taken, this also indicates more precipitation at the time (Chiverrell, 2001).

When comparing Humification data to the Testate Amoebae study (figure 3) it shows two periods where a wet, cooler climate is found, indicated due to the types of species found within the testate amoebae 100cm core taken. When analysed there are small shifts between 20-25cm, with a change in species throughout 35-85cm, the dominant testate amoebae being Archerella Flavum which represents a higher water table and that of an environment which has more precipitation, indicating a wet and cool climatic shift.

When comparing Humification (figure 4) data to testate amoebae (figure 3) data to analyses periods of warmer climates it is evident that throughout 20-85cm the climate was a wetter cooler climate with high levels of precipitation. However, between 5-20cm and 85-100cm the dominant species is Hyalosphenia Subflava. The species reoccurs from depths at 5-20, 30-50, 55-60, 70-85, 90 and 100cm the presence of Hyalosphenia Subflava would indicate a dry, warmer climate. However, when compared to Humification data, some of these dry shift are not shown, this may be due to the fact Humification data may not show subtle changes in an environment whereas a living organising depends on certain characteristics within the environment which show some subtle changes in climate that Humification data could not determine correctly. The data from Humification may show altering data presenting longer wetter phase in climate but when compared to Testate Amoebae data the evidences sometimes shows the opposite indicating a dry warm climatic shift, these errors are found usually found with in a transition period in the climate, this may be why data is interpreted different due to the reason variables within the peat are changing.

The best evidence within the study of multi-proxies to test on how much involvement anthropogenic features have within the environment of the peat bog is found within the XRF data. the evidences shows lead (Pb) in PPM within peat at Holcroft Moss (1280 AD and earlier – to present day). From 1280 AD the presence of Pb was hardly an influence within the peat bog, this changed from 1880 AD onwards, which was due to the introduction of lead within the environment. Pb in PPM throughout the Holcroft Moss sample constantly rises for 92 years, to then decrease (1972 AD) However, these levels are still high concentrations of PB and are found at (200+ PPM).

From 1880 -1972 AD lead constantly rises and this would coincide with the industrial revolution, which includes the introduction of engines which used lead, this input from human based activities towards the environment is clearly shown in the XRF data and the Pb percentage drops in the 1980’s which coincides with the replacement of leaded petrol to unleaded petrol, it is more than likely that the use of automobiles, especially with Holcroft Moss being located so close to the M62 had an influence on Pb input throughout the time of 1880-1972AD and still continues to this day.

The Multi-proxy study of palaeoclimatic changes within the Earth through data sets taken from Holcroft Moss allow for a reconstruction of previous climates at that time this peat was accumulating.

Holcroft Moss, Cheshire is a site of special scientific interest (SSSI) as the site allows for multiple outputs of data, which can in turn be used for an approach of how aspects within the accumulation of peat have changed through-time. Peat bogs do not rely on outside factors to influence growth and production of peat. The system is sustainable and constant, with the only variable changing its characteristics being climate and the input of regional/extra local inputs, natural or anthropogenic. Due to this, outside factors influencing or affecting the area have a minor effect of the full development of a peat but can still be measured precisely showing a clear and accurate reconstruction of past environments and climates.