The broad concept of this report includes vascular plants and the effect different environmental factors have on the rate of transpiration.

Transpiration is the act of which moisture is absorbed and transported from the roots of the plant in an upwards motion through the xylem to small pores located on the underside of the leaves. This is where the moisture is converted into vapour and is released into the atmosphere. As a result of this process-taking place, plants are able to absorb nutrients, stay cool in hot conditions and exchange gases-which helps to maintain the CO2 and O2 levels equal in the atmosphere. (Evapotranspiration and Water Cycle, n.d.)

The amount of water that plants transpire varies greatly depending on the atmospheric affects that different environmental factors have on plants. These can include: temperature, light, humidity, wind/air movement, soil moisture and the type of plant where transpiration takes place.

Having an increased amount of movement through the air surrounding the plant will result in a higher transpiration rate. Wind moves oxygen and carbon dioxide effectively, resulting in more saturated air closer to the leaf being replaced by drier air from the atmosphere. (Evapotranspiration and Water Cycle, n.d.)

An important factor in transpiration is the size of the boundary layer found. This thin layer of air reduces the rate of transpiration by causing the water vapour released, to break through this layer, in order to enter the atmosphere. However, wind can break down this boundary layer, making it thinner and somewhat quicker for water vapour to escape. (Transpiration- Water movement through Plants, 2019)

Carrying out this experiment enabled the group to investigate the effect of wind on the rate of transpiration. By researching and finding results from other experiments of similarity, a more knowledgeable understanding of what procedures were to be followed when conducting this experiment, resulted in a clearer expectation of what to find in the final results. Based off of the results of a student investigation, (The Affect of Wind on the Rate of Transpiration 2015) a prediction can be made that ‘with exposing the stomata of the leaves to windy conditions, the rate of transpiration will increase.’

Does increasing the amount of wind throughout the atmosphere affect the rate of transpiration in the plant; ‘Arabica K17 Cultivate’ over a 5-day period?

Modifications to the Methodology

To ensure that sufficient, relevant final data was collected, this experiment has been minimally modified. The original experiment (Daymap, 2019) was to measure and determine the transpiration rate of different plant cuttings over seven days (168 hours). By cutting the stems of the plant to be equal in length, (9 cm) and for each stem to have an identical amount of leaves, it was possible to ensure that all 6 trials were equivalent. For the modified experiment, six trials from each sample were taken to ensure that reliable, sufficient data was collected. This also allowed for a more accurate calculation of the mean, standard error and confidence interval. These trials were measured every 24 hours over a five-day period and had a modified independent variable being wind, at a speed of 2.1m/second. To ensure very little errors occurred, all other variables were controlled and kept dependent as per the original experiment.

This experiment is a low-risk investigation, and consists of minimal dangerous materials. Potential hazards may consist of:

In conducting this experiment, the group understood the potential risks that the materials chosen to use could create. The group intended to carry out this investigation safely, and to handle all equipment with standard handling procedures. To ensure no hazards occurred, the group set up the experiment maturely, safely and cautiously. 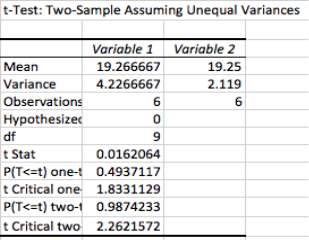 (The same applies for the rest)

Interpretation and Data Uncertainty of Figure 2:

The data shown in the above table demonstrates that the test without the effect of wind had a greater uncertainty around the group of data compared to the test with the effect of wind. However, since the standard deviation and standard error are very similar in their results at the 96-hour period, (2.05588586 and 1.45567854 compared to 0.83931189 and 0.59427827) this implies that the data is reliable.

The mean in the above data shows the average rate of water loss after a certain amount of hours. Both the tests with and without wind show a gradual fall in millilitres, which exemplifies the average rate of transpiration. By identifying these results; it is possible to conclude that the test without wind (0.7626707 to 2.0558859) had a greater rate in transpiration than the test with wind. (0.2738613 to 1.4556785)

The t-test shown here, illustrates that the two-tail P value is more than 0.05 (0.9874233) indicating that there is no significant difference between the groups. By concluding this, the observed data reflects the low influence wind had on the test, therefore showing that an increased amount of wind on the ‘Arabica K17 Cultivate’ over a 5-day period, does not affect the rate of transpiration.

The descriptive statistics shown in Figures 4 and 5 details the processed data from this investigation. Within 24 hours (from 72 hours to 96 hours) the trial without wind had lost an average of almost 3 centimetres. (21.0833333 down to 19.2666667) In contrast the trial with wind present showed a slower rate of transpiration, only losing an average of almost 2 centimetres. (20.6333333 down to 19.25) Results from these tables have been evaluated previously throughout this report. 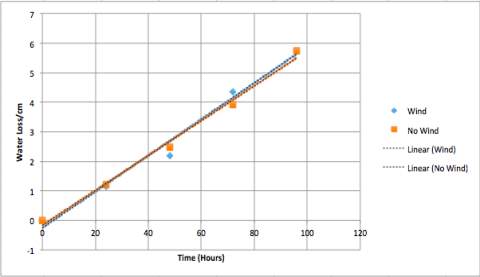 The data in Figure 7 shows data results from the Average Transpiration Rate at a 72-hour period, both with and without the effect of wind. According to the columns, the two rates share very similar results in average transpiration rate, demonstrating the slight positive affect wind has on transpiration.

The Error bars in this graph clearly show the results of standard error at 72 hours in this experiment. In the data collected, the results suggest that a significantly high level of accuracy is shown in both sets of trials. This is because error bars overlap quite significantly when the difference in results is not statistically significant. The error bars can also demonstrate that the data obtained is accurate and therefore reliable because of the almost identical alignment of the error bars shown in Figure 7.

In this experiment, the reliability of the data could be improved by ensuring that every leaf of each stem had an equal amount of surface area. By doing this, the final results in the mean, standard deviation and standard error would be more accurate.

An issue we addressed from the original experiment was to increase the number of samples, tests or trials. By doing this in the modified experiment there was more of a possibility to improve both the reliability of the data and the validity of the experimental process.

By identifying these sources of error, further investigations completed in future will result in less inaccuracies, miscalculations and human errors.

With the loss of water in both trials demonstrating the affect of wind on the rate of transpiration, this investigation has shown the minimal difference in water loss, between the trials having either a presence or absence of wind. In comparison to other experimental methods viewed (for example) the results in this group showed significant contrast. Although not significant, the decrease in water throughout a 24-hour period was shown to have been larger in the trial with wind absent. This was suggested to have been as a result of the few experimental errors, miscalculations and human errors. To support this thesis, the two-tail P value demonstrated that both trials had very little difference as the result was larger than 0.05. (0.9874233) Although other investigations have suggested (Effect of Environmental Factors upon Transpiration n.d.) that with the occurrence of wind, saturated water will be manoeuvred away from the stomata, allowing for gas exchange and decreasing external water vapour concentration, our experiment did not support this evidence.

In regards to the research found in the rationale, the information obtained from the above tables and graphs demonstrate that the wind speed directed at the plants wasn’t strong enough to break through a large amount of the boundary layer, resulting in minimal assistance in the rate of transpiration.

In Conclusion, the evidence demonstrates that the occurrence of wind in the plant; ‘Arabica K17 Cultivate’ over a five day period, did not affect the rate of transpiration when in comparison to the control. (Trial without wind) Based on the prediction that ‘By exposing the stomata of the leaves to windy conditions, the rate of transpiration will increase’ this investigation has been unsuccessful in proving this statement.