2.1 Impacts of Nitrogen on Environment:

Being the most abundant element in the environment, Nitrogen is extremely important nutrient for living species. We animals- and our plant companions- just do not have right enzymes to capture, or fix, atmospheric nitrogen. Nitrogen is an integral component of many biochemicals including amino acids, proteins, nucleic acids, and human DNA.

The term nitrogen cycle refers to the movement of nitrogen through the air, water and soil of earth. The availability of biologically useful form of nitrogen is a common limiting factor in the productivity of plants. Nitrogen is made available to plants, which in turn ultimately sustain all animal life through a series of microbial transformations.

Atmospheric nitrogen is made available to earth by precipitation such as rain or snow. Once it reaches the soil it finds its way to the bacteria on the roots of the plant. At the roots, nitrogen is combined with hydrogen to form ammonia (NH3) through a process called nitrogen fixation. Lightning in the atmosphere can also perform this activity. Ammonia is toxic, hence additional bacteria combines it with oxygen by a process called nitrification. Now the by-product is called nitrite. Additional nitrifying bacteria convert nitrite into nitrate which are absorbed by the plant by a process called assimilation. However, not all the nitrite is absorbed by the plants. Some of them will be taken by denitrifying bacteria and released back to atmosphere. Animal will be getting this nitrogen by eating plants or other animals which eat plants. When animals die, they will decompose and release the nitrogen into soil, and this will undergo ammonification to form ammonia and it will continue its cycle [1]. However, this natural cycle is disturbed to a high extent by various human activities such as follows:

(1)   Air Pollution: Industrial emissions of various nitrogen oxides (NOx) and other volatile matter reacts to form ground level O3 in the presence of sunlight. This in turn damages the earth’s atmosphere ozone layer which causes life threatening diseases like skin cancer, lung cancer, other respiratory problems and many more.

(2)   Soil Pollution: Another major source of nitrogen is excess use of nitrogenous fertilizers. This affects the food quality and damages the fertility of soil. Crops containing excessive fertilizers has indirectly higher nitrogen content which affects human health.

2.1 Impacts of Nitrogen on Environment:

Nitrogen being the primary nutrient for survival of all living organisms is present abundantly in the atmosphere. The Earth’s atmosphere has about 78% of nitrogen from various sources like water, air and soil. Majority of the nitrogen comes from industrial waste and fuel combustion in vehicles. Windsor is the automotive capital of Canada because of the presence of many automotive industries and recorded as the worst place in the province with a ground ozone level of 77 parts per billion over eight-hour monitoring period. Thus, there is a very critical threat on environment due to imbalanced nitrogen cycle [2]. Another major source of nitrogen is the increased use of nitrogen is containing fertilizers in crop production. With the drastic growth of population of Windsor from 1960 to 2010 as shown in the graph, the food demand also increased. This led the farmers to use nitrogen-based fertilizers to fulfil the crop production needs. Thus, the agricultural soils contain high nitrogen compounds causing nitrogen imbalance in both soil and water (due to soil run-off into water).

The government has laid a few plans to manage nitrogen in the environment.

(1)   Ontario government has implemented a limit on NOx emission to control its content in the atmosphere.

(2)   NMAN is a software tool developed to determine the best way to store, treat and use manure in the farming land by the government in an effort to reduce to nitrogen content of soil [3].

The graph shows trend of nitrogen emissions in Ontario, Canada from 2004 to 2013 showing that major source nitrogen compounds is from transportaion. According to study report by students of University of Windsor, decrease in NOx emissions was observed. The graph below shows the decreasing trend of nitrogen compounds in Windsor’s air. This is apparent that Ontario government was succesful in curbing the levels of nitrogen (NOx) emissions in Windsor city.

Still, Windsor’s air is worst in Ontario for human health and is amongst the 10 cities in Canada whose air quality is in the offender list according to WHO guidelines. Also, over the span of years the nitrogen content in the fertilizers has increased drastically as seen in the graph above which is a matter a great concern for human health. To reduce environmental pollution due to excessive Nitrogen content we are proposing the following two processes.

Thus, we can avoid delays because of unavailability of raw materials and equipment.

We should consider the amount of compost required for Farming and amount of Hydrogen Peroxide required in industries of Windsor-Essex region, and accordingly we can find out the total number of Compost convertor and Exhaust Gas Dilution units to be installed.

We need to consider following criteria for successful implementation of our project.

Cost is the most important criteria for finalizing the solution to problem.

Implementation time is the total time taken to complete and start the project. It depends on the proposal. After that, project should be completed within the given time period.

This is method of reducing the amount of nitrogen oxides (NOx) in exhaust gases. During the combustion process in engine cylinder, the nitrogen dioxides are generated. To overcome the production of nitrogen dioxide we use this system in internal combustion engines. A part of the exhaust gases is recirculated into the main inlet stream of the charge to provide inert gases, which act as absorbents of heat in order to reduce the maximum temperature of the IC engine. By combining atmospheric Nitrogen and Oxygen we can produce Nitrogen Dioxide at high temperature and pressure. For the elimination of the production of Nitrogen Dioxide we are using Exhaust Gas recirculation Method.

Without affecting the air fuel ratio this exhaust removes some of the charge coming in the combustion chamber in a gasoline engine. A EGR also helps in increasing the efficiency of the Spark ignited engine as it reduces throttling losses, heat rejection and reduced chemical dissociation.

In the pre combustion mixture the Diesel engine helps to reduce the excess of the oxygen. Equilibrium of NOx and CO reintroduced in the combustion chamber by the gases which inhibits net production of the harmful gases and other pollutants when sampled on an average time. We designed a food recycler for composing waste from agriculture and food. The parts for making this Converter are easy to find and can be purchased directly from the nearby market. We researched in the whole city of Windsor for getting the idea of how much compost converter we need so that we can decide how many units needs to be installed. Compost is the only alternative option of nitrogen-based fertilizers.  Compost is important when it comes to decompose organic material such as Agricultural and food waste. By using this we can help in reducing the garbage volume as well as less NOx in the environment. 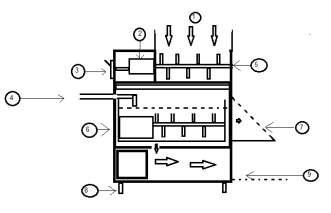 Food and Agriculture waste inlet – This is the inlet where we need to put all our waste in order to compose it.

Electric Motor – This motor relates to the grinder. After getting the power the motor starts rotating and helps the grinder to run.

Start/Stop Switch – With the help of AC power we can run our converter. This switch is for turning on the power or turn it off. After turning this on the motor starts running.

Grinder 1 – After putting the wastes into the inlet this grinder helps to make them into small pieces.

Grinder 2 – After that the small pieces of the wastes are mixed with water. This grinder 2 helps to mix that and after that it convert our waste into pulp mixture.

Compost Outlet tray – When the mixture pulp is made by the grinder 2 we can take out our mixture through this outlet tray.

Waste materials and water outlet – Sometimes for some waste like solid particles the extra water comes to the bottom of the converter and we can clean it easily with the help of this outlet.

The timeline is the most critical part in the project implementation. To successfully complete the project, the following steps will be required:

1)     STEP 1: Official permission from Council of Windsor-Essex county to implement

Identifying the industries which are spreading more amount of Nitrogen oxides in the atmosphere needs to be targeted first. After that, we need to analyze if our designed system will work in different industries or not.

To implement the exhaust gas dilution method in the industries is a complex process, specially to assemble different individual components. Some industries have their own methods of reducing nitrogen oxides, so to convince them is also an important task. After the components are installed various test should be done to check the working of the system.

1)     STEP 1: Official permission from Council of Windsor-Essex county to implement

The advantages of compost convertor should be explained to local public by various modes of communication such as newspapers, flyers, radio and many more. Then, we can present our proposed model to the council members of Windsor-Essex county.

A group needs to be formed who will execute the proposed model into real life scenario as per expectations. Also, the detailed budget needs to be allotted for proper implementation of compost convertor.

The installation of compost convertor can be completed easily in very short time period. Also, it is not very expensive and the initial cost is also very low.

The concern of air pollution though has been dealt seriously still needs improvisations; as we know that collecting each and every drop of water, we can create an ocean. Via this study we propose an EGR system to control the emission of NOx while not disturbing the efficiencies of diesel and petrol vehicles.

Compost production would be increased after the installation of food waste recycler and would have enough compost to replace nitrogen-based fertilizers; which are being used currently by growers in Windsor-Essex region. Around 23,581tons of compost will be produced in a year and approximately 50% of nitrogen emission can be reduced by this solution; as the nitrogen-based fertilizers are the main source of excessive nitrogen emission