Abstract - Air contamination happens when unreasonable amounts of substances including gases, particulates, and organic atoms enter Earth's environment. It might cause maladies, hypersensitivities and even demise to people. Air Pollution is worst in India and is likely to cause more deaths. Amongst the top five causes of deaths worldwide is CVD, COPD, lower respiratory infections, and lung cancer. This paper is to bring into highlight the air pollutants in India and its effects on health. As Delhi is the capital of India, so the focus of research was more on Delhi along with Haryana from 2012- 2018 as compared to other states.


There were 7 million deaths in 2012 (WHO, 2015) because of air contamination. Nine out of 10 individuals on the planet inhale contaminated air.

Recently, the air contamination status in Delhi has experienced numerous adjustments as far as the levels of toxins and the control estimates taken to diminish them. The database of the World Health Organization in September 2011 shows that Delhi has the most extreme PM10 value by very nearly 10-times at 198 μg/m3. Vehicles discharges were observed to be related to indoor and open-air contamination in Delhi. [1] Contaminated air has a negative effect on a human, influencing various distinctive frameworks and organs. It shows intense respiratory contaminations in young and constant bronchitis in grown-ups, lung infection, and asthma.  Change in vaporous and particulate air toxin fixations have a checked and close transient relationship with unfavorable results [2]. 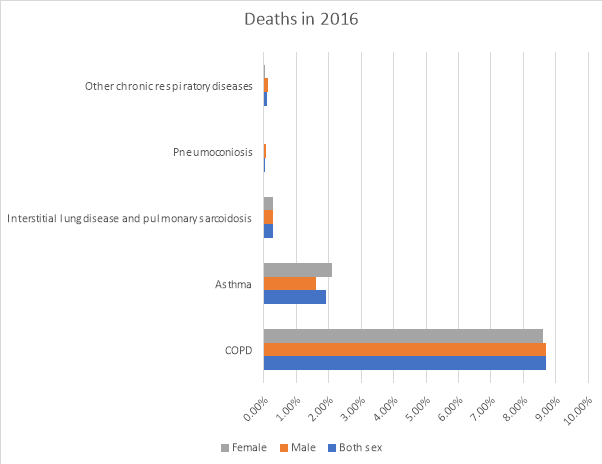 Fig1 Female death is more in 2016 as compared to Male from Asthma and COPD.


Air pollutants are classified as suspended particulate matter (dust, fumes, mists, and smokes); gaseous pollutants (gases and vapors); and odors. PM10 is smaller than 10 microns (10µm) and is most hazardous. PM2.5 occurs by the condensation of gaseous pollutants such as SO2, Sulfur trioxide, and Carbon monoxide; Nitrogen compounds such as nitric oxide, NO2, and ammonia; Organic compounds such as hydrocarbons; Volatile organic compounds; polycyclic aromatic hydrocarbons and halogen derivatives such as aldehydes; and odorous substances. [4] Air Pollution effects the immune system of the body, which acts as a host defence system that protects against the disease [3].

TSPM: Stands for Total Suspended Particulate Matter and one would get when a high-volume mass concentration is done on a channel substrate.

RSPM is a small portion of TSPM which is breathed in by people through their respiratory framework. and when all is said in done, considered as a particulate issue with their breadth (streamlined) under 2.5 micrometres.

The RSPM value has increased from 2013- 2016. It shows decreased in 2017 in the month of October in data available from PPCB for Vinod Milk Chilling center, Amritsar but shows an increase from May-Oct and decrease from Jan-March and same in April. 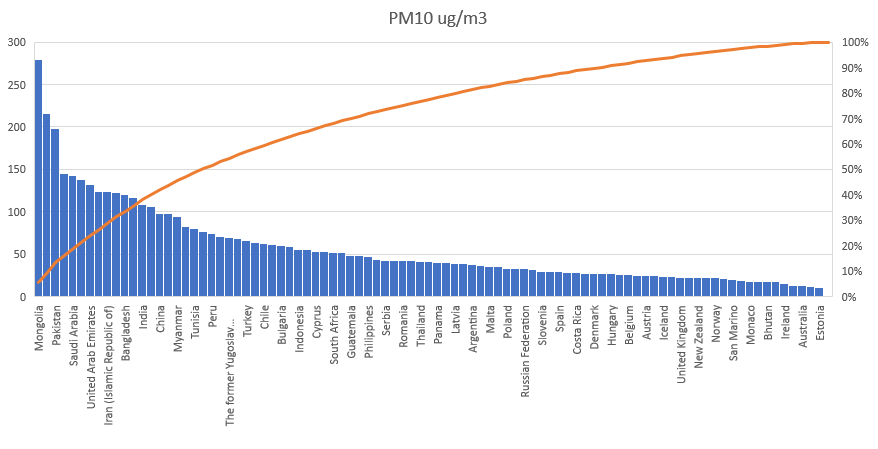 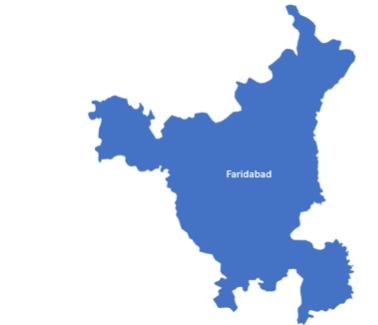 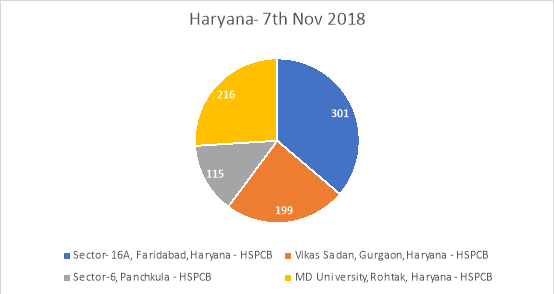 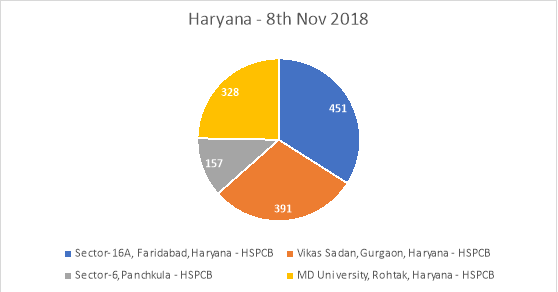 Fig 4 The most air pollution in Haryana is in Faridabad in Sector 16 A recorded on Diwali day. 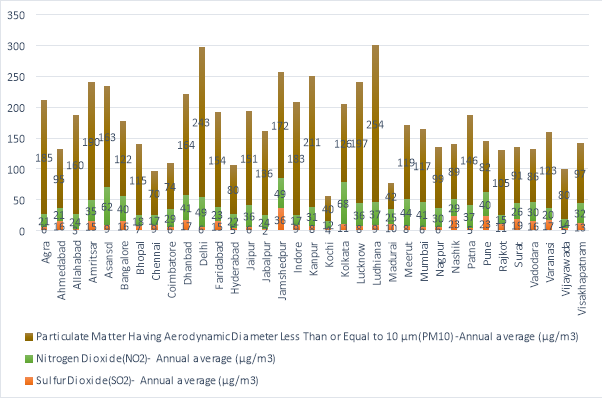 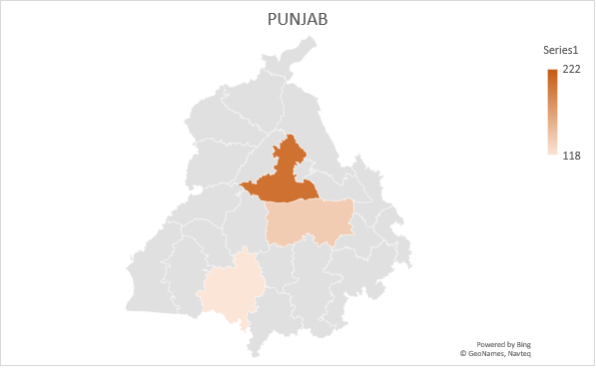 Diwali day Punjab Mandi Govindgarh at high value of PM2.5 222 and less of all is Bathinda with PM2.5 value of 118. 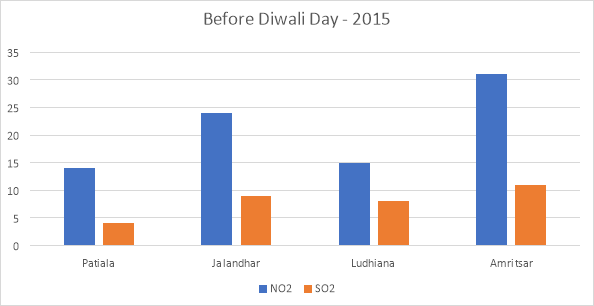 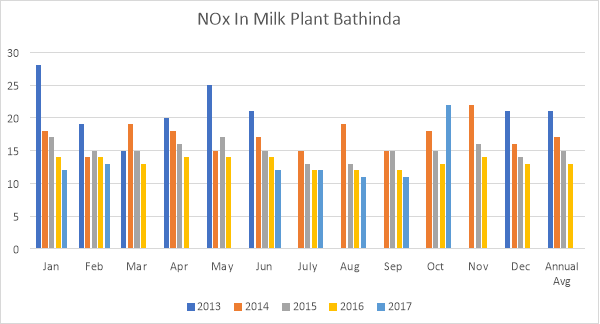 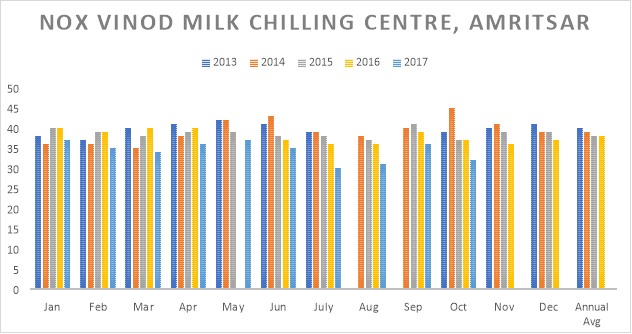 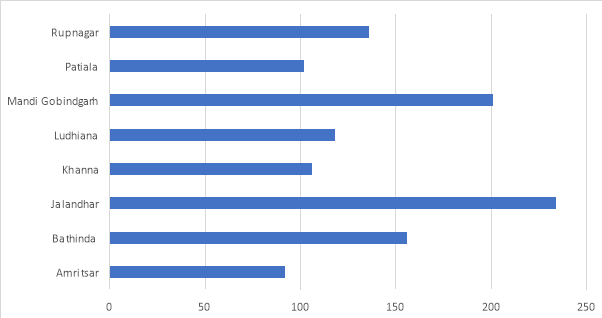 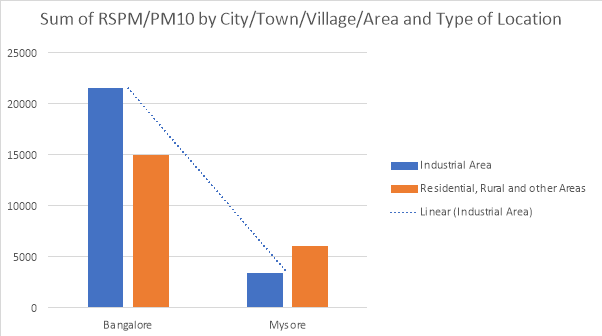 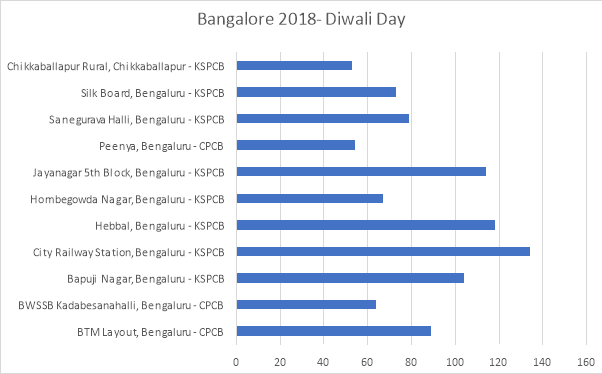 in a gigantic weight on the general wellbeing framework. Likewise, if this somehow happened to influence the talented youthful human asset, it would represent a risk to the city's economy that is developing exponentially. It is essential

There is a requirement for more extensive research and distributions in the zone of air contamination and its consequences for wellbeing. Specifically, the advancement of an important and far reaching proof base would prepare Bangalore and India with the capacity to take educated activities [14] 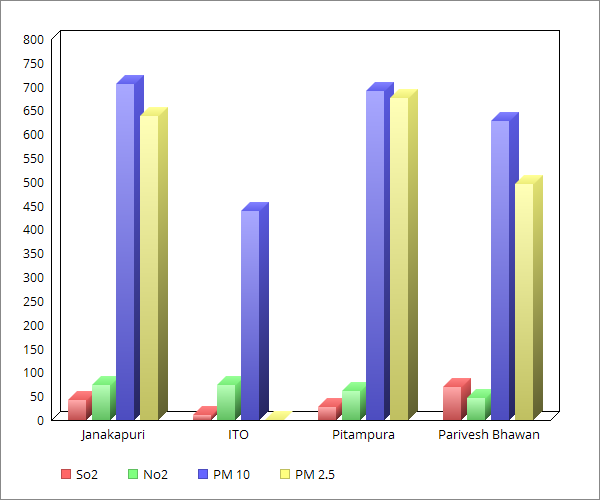 On Diwali Day PM10 value was high in Janakapuri as compared to ITO, Pitampura and Parivesh Bhawan. PM2.5 is higher in Pitampura. The So2 conc. And PM 10 and PM2.5 increases as compared to pre-Diwali day. 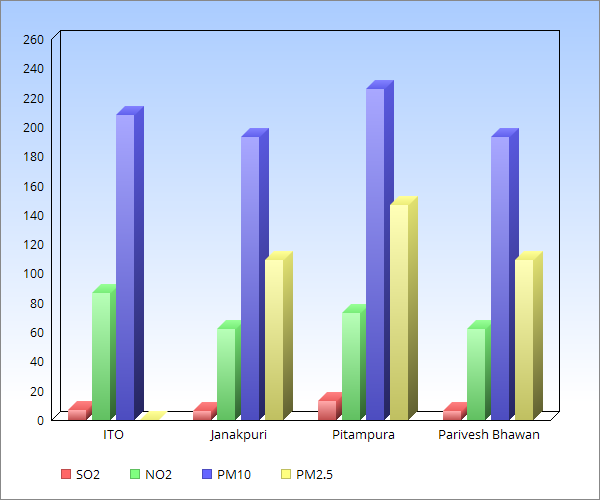 On Pre-Diwali day the value of PM 10 was noticed higher in Pitampura. 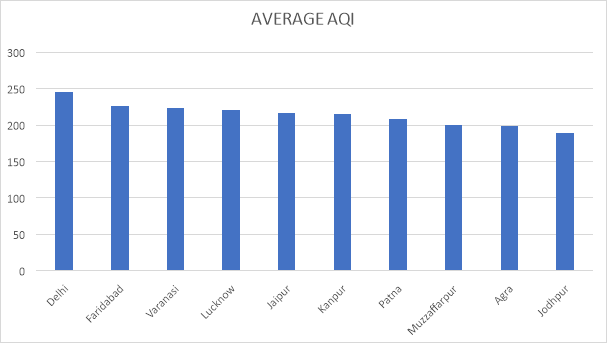 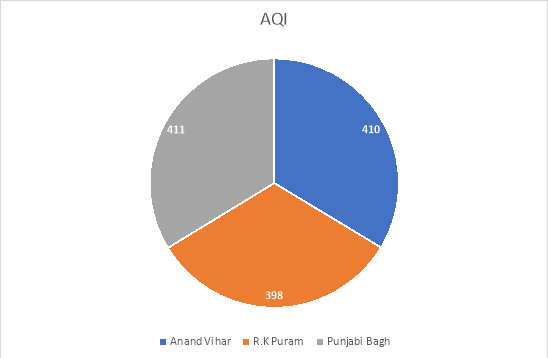 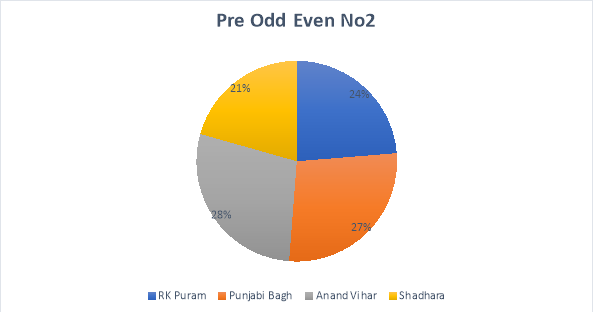 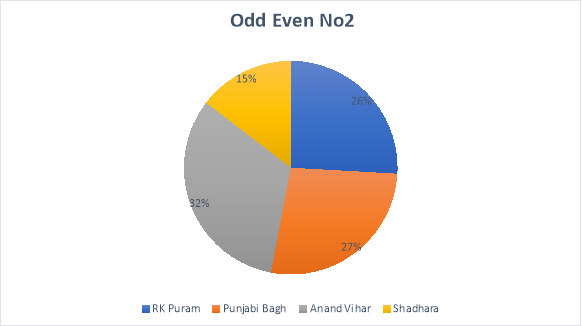 During Odd- even in Delhi NO2 conc. Was found to be higher in Anand Vihar. 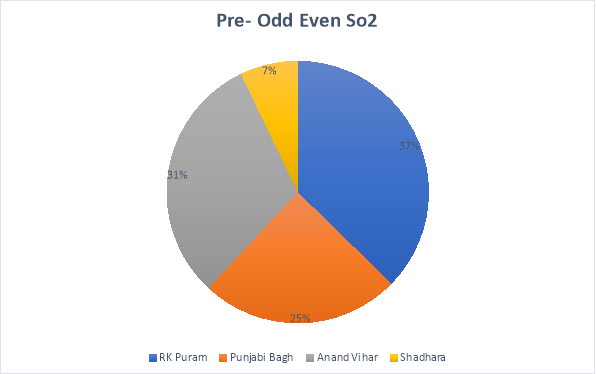 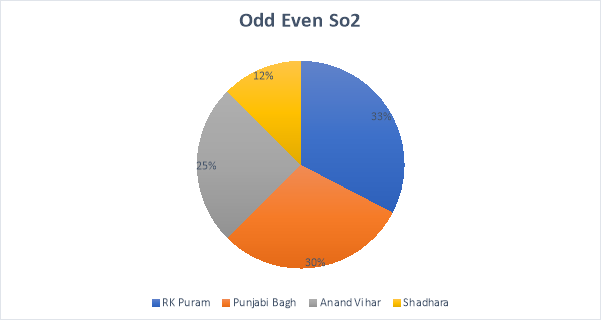 Fig 15 Odd Even and Pre-Odd Even So2 Conc. In R.K Puram, Punjabi Bagh, Anand Vihar and Shadhara 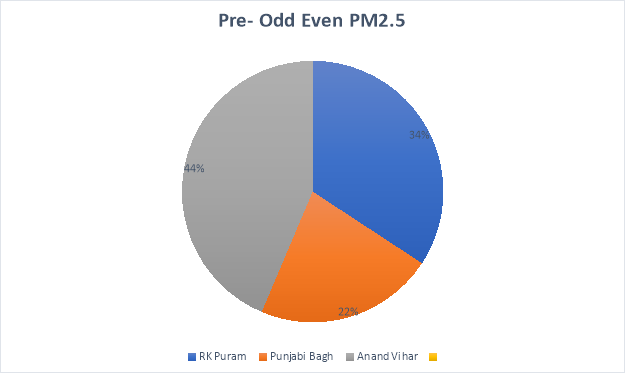 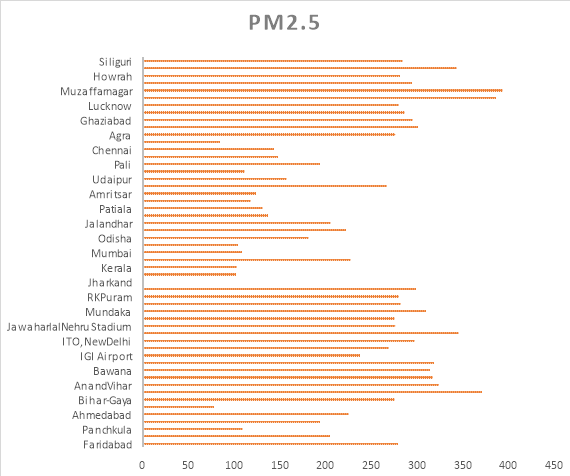 1)     Air Pollution – It is caused by harmful gases and smoke. Harmful gases include oxides of Carbon, Nitrogen and Sulphur. There are two types of air pollution.

or Sound pollution have the harmful effect of noise on human and animals. Machine, transport, loud music is the major cause of sound pollution.

3)     Water pollution—It is the contamination of water bodies like lake, rivers, ground water and oceans as a result of human activities. It ccurs when the waste water get mixed with natural water making it unsafe, polluted for drinking, and irrigation purpose.

4)     Land or Soil Pollution: It is the pollution in which land is filled with industrial waste or garbage’s.

Effects of health on Air pollution

Respiratory diseases in Delhi from 2012 arose to 5 million. Chronic Obstructive Pulmonary disease has been increased from 2016 and is of great concerned as the ambient air quality is getting worse.  There has been rise of COPD cases from 28.1 million cases to 55.3 million cases in 2016 and an increase in prevalence from 3.3 % to 4.2% [6]. It also has side effect on heart making an increase in Cardiovascular disease. [5] About 2000 patients for the age group of 18-70 yrs was tested suffering from COPD in Ludhiana district, and surrounding areas of Moga, Jalandhar, Machiwara, and Ferozpur. Air pollution in Punjab is highly concerned effecting young people with COPD.  Outdoor air pollution has also become leading cause of cancer. Most of the effect of pollution is creation of hole in the ozone layers which protects us from harmful Ultraviolet rays emitted by the Sun, and it may cause skin cancer and cataract [ 7]. 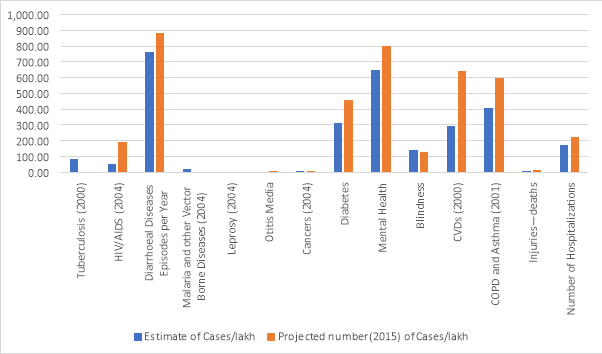 Comparison of data of 5th Nov 2017 and 5th Nov 2018 shows PM2.5 value high in Punjabi Bagh. Anand Vihar ranks high PM2.5 value for 05 Nov 2018 from Punjab, Faridabad, Uttar Pradesh, etc. Agra seems to be highly polluted at 9 AM then 05 Nov 2018 at 6:00 PM and there was an increase in PM2.5 value in Panchkula and Ahmedabad. Day time should have been decreasing as other cities except for Kanpur for which data was not available but Agra shows high PM2.5 value. This year before Diwali PM2.5 and NO2value have increased as compared to previous Diwali day in areas of Delhi Anand Vihar, R.K Puram, and Punjabi Bagh. These areas are quite unsafe for people to breath as they are more risk in developing heart or COPD and cancer disease.

PM 10 value for Anand Vihar is more than RK Puram and Punjabi Bagh in April, October and November data.

Most of the pollution is from the Residential area as compared to the industrial area in 2015. PM2.5 is higher as compared to PM10 value on Diwali Day. 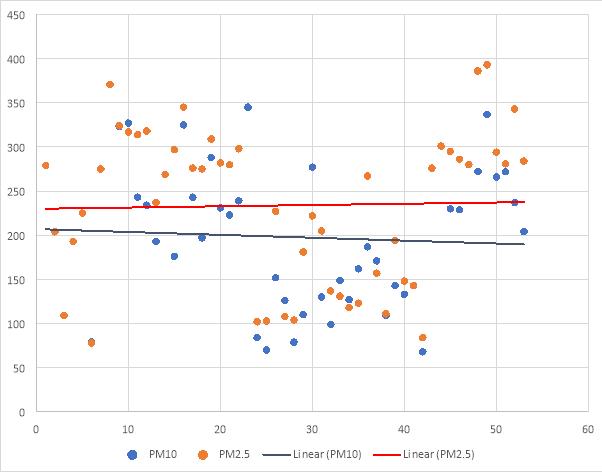 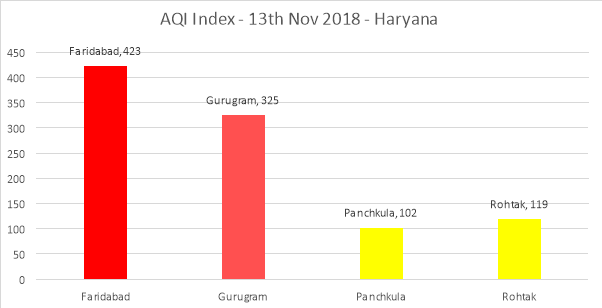 The research done shows that almost entire Delhi, mainly Ashok Vihar, Wazirpur, Jhangirpuri, Anand Vihar, RK Puram, and Punjabi Bagh, UP mainly Muzffarnagar, Greater Noida, Haryana mainly Faridabad are quite unsafe for people living. In Punjab Mandi Govindgarh and Jalandhar are most polluted areas. There was rise in respiratory cases in Anand Vihar and  Anand Vihar is considered as the most polluted area of Delhi. The highest AQI index on Diwali day was found to be in UP and on next day in Faridabad. Air pollution is the biggest problem in India in the three states Delhi, UP and Haryana and it is cause of respiratory, cardiovascular disease and skin cancer.