According to energy shortage in terms of fossil fuels, this research provides one of the alternative energy from Microalgae to biofuel by using McLuhan’s Tetrad to find the possible answer to solve the fossil fuel crisis in Australia. This report will cover in the detail the next-generation of fossil fuels, second and third-generation biofuels. Other details illustrate the advantages and disadvantages of Microalgae. The result of microalgae that is analyzed as a creature which reduces the amount of carbon footprint and also has a full of nutrient. However, some species of microalgae are toxic which cause HAB or high algae bloom problem. Besides, the development of microalgae’s commodities has a high amount of investing. Consequently, several researches were conducted to carry them out developed the third-generation biofuel to has adequate resources to meet the society’s needs and then completely be the solution to fossil problems in Australia. The recommendation includes providing financial aid to support biofuel’s project and a helpful information which relates to algae’s problem to predict, prevent, and mitigate the coming of HAB outbreaks in an area.

Throughout the history of energy consumption in Australia, Fossil fuels have been the main resource to be consumed in daily life. According to the department of the Environment, and Energy (2019), fossil fuels (coal, oil, and gas) accounted for 94 percent of Australia’s primary energy mix in 2017–18 furthermore, Oil consumption increase by 3 percent per year. The increase of fossil consumption still continues every year which causes the fossil shortage In Australia. As a result of this, the biofuel will be the alternative energy to deal with this crisis in the future. Currently, Microalgae are interested more as a particular creature for biofuels. Biofuels from microalgae are known as effective and clean energy. Due to the character of microalgae, they use lower quality saline water and also has the ability to sequester CO2. Furthermore, they use low quality of non-arable land. Quinn (2011) points out thatconsequently, biofuel from microalgae has the ability to consume instead of petroleum fuel and first-generation fuel in the long term.

According to environmental issues, this report is conducted to demonstrate the productive ways to reduce fossil fuel consumption by using microalgae’s biofuel and therefore, this supports to restore a nutrient environment and bring back a healthy life of people in society. To achieve this aim, biofuels from microalgae will be analyzed by using McLuhan’s Tetrad to classify in terms of enhancement, obsolescence, retrieval, and reversal. Finally, this report will illustrate the recommendation to deal with the possible problems of microalgae.

McLuhan’s Tetrad is a useful hypothesis that is used to understand the potential effects of any new device or technique in society. Levinson (2003) added that McLuhan can be asked of medium and its impact to indicate more area which we can see and know more. Consequently, they provide the concept of four factors in terms of enhancement, obsolescence, reversal, and retrieval which changes our ways to predict the effect of material things before they obviously occur in time and experience.

First of all, Enhancement concentrates on what the media enhances or intensified, that is television amplifies instant visual long-distance communication. Secondly, obsolescence describes something which can permanently replace another thing, therefore the obsolesced media can be presented. For example, the development of television leads us to the live without the leading edge and newspaper. Thirdly, retrieval is used to explain something which can be brought back to consume it. Furthermore, it also can be a positive or negative thing from the past. To illustrate, they retrieve oral communication from early times. Finally, reversal represents the effect that occurs in a beneficial way as well as it also reverse the opposite way. Radio was a good case to turn into broadcast and images-television. 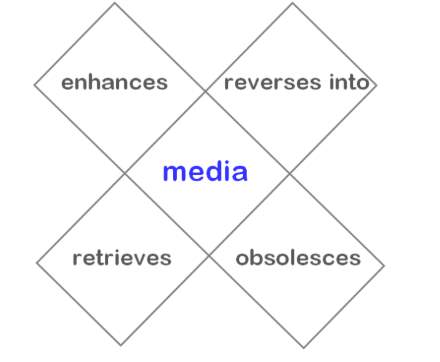 Figure 1. Visualization of a tetrad

3.1 What does the biofuel from microalgae enhance?

There are many products from agriculture which are possible to produce biofuels such as soybean or corn. However, biofuel from microalgae has been known as an alternative sustainable energy. Quinn (2011) refers that microalgae have many characteristics as using high solar to produce a huge amount of microalgae, year-round cultivation, and using lower quality of saline water. Furthermore, Microalgae compared to traditional terrestrial crops have significantly higher growth rates and lipid percentages, thus microalgae have high productivity which intensifies the adequate natural resources to produce clean energy in order to meet society’s needs. Microalgae also intensities in economic terms as increased job opportunities. In 2015, there was the creation of more 39,100 new jobs which biofuel production will support. For example, the biodiesel industry will spend $627 million on the American households each year for a total impact of $6.3 billion from 2006 to 2015 and therefore, the expansion of Biodiesel Company can generate more tax revenues for government at all levels and corporate income taxes that increase in line with higher output level and larger GDP (as cited in Zhu, Huo, and Qin, 2015).

3.2 What does biofuel from microalgae obsolete?

First of all, Biofuels obtained from microalgae are the third-generation biofuel which has the potential to be consumed instead of petroleum fuel and first-generation biofuel because it releases more carbon emission less than petroleum fuel and first-generation. According to the department of the Environment, and Energy (2019), the decrease in coal consumption is around 21 percentages that are lower from 2008 to 2009 peak. Consequently, fossil fuels become obsoleted because currently, we have renewable energy and clean such as biofuel from microalgae that can be used instead of fossil fuel resources. Secondly, microalgae are one of creature which is full of nutrients and can be possibly recycled after being used for producing biofuel. Ronga et al. (2019) identify thatthe fertilizer from Microalgae has the potential to protect the nutrient losses through a gradual of Nitrogen, Phosphorus, and Potassium. Furthermore, Microalgae are able to recover the nutrition of the soil. As a result of this, Microalgae fertilizer has the effect same as chemical fertilizer and therefore, the chemical fertilizer becomes obsoleted because they are harmful than microalgae fertilizer which is recognized as an organic fertilizer.

3.3 What does the biofuel from microalgae retrieve?

According to a healthy environment, biofuel from microalgae will retrieve some other generation of biofuels to use instead of fossil fuel. For example, biofuel from Brassica Carinata seeds is the second-generation biofuel that will be used to make Qantas's aviation biofuel in 2020 and the increase of biofuels from corn which is the first-generation biofuel that can be used in vehicles as a car between 2006 and 2010. (Bacovsky, Holzleitner, & Enigl, n.d.). According to the two generations of biofuels, they have the potential to be the energy for consuming instead of fossil fuel. However, the first-generation biofuels still cause many environmental problems such as, soil-erosion, breaking the balance of eco-system and carbon emission (Viesturs et al. 2014). Consequently, they will often not be used in major industries and focus on the second generation of biofuel which is the agricultural residue such as bagasse and straws, used for creating bio-energy. Another retrieval from microalgae is healthy land, Do Nascimento, et al. (2015) illustrate that microalgae contains an abundant nutrient including nitrogen-fixing, phosphate solubilizing and plant growth-promoting microorganisms. Due to these properties from microalgae, it can solve the problem about land degradation and therefore, bring back rich nutrient soil at the end of restoring the land process.

3.4 What does the biofuel from microalgae reverse?

First of all, the majority of algae are harmless but some species reverse to public health and environment concerning worldwide. Harmful algae blooms or “red tides” occur in the US. Additionally, algae blooms occur in the summer and autumn which can threaten the health of the environment, plants, animals, and people.  They use up oxygen and block the sunrise to other aquatic animals need to survive. Some of them also produce toxins that can kill fish, other marine animals, and even people. (Capper, Flewelling, & Arthur, 2013). Next, biofuel from microalgae is the third-generation biofuel which is needed a huge amount of fertilizer to grow microalgae in terms of industrialization. Furthermore, the development of microalgae’s biofuel will take a huge amount of money. Ruiz et al. (2016) claim that because the commodities from microalgae are not profitable yet and the market price is very low. Besides, revenues do not counterweight current production costs. As a consequence, microalgae reverses to commercial unsustainability.

In summary, Microalgae is one of the possible ways to deal with the fossil fuel shortage. Due to Biofuel from the Microalgae, it is from the third generation which has the potential environment and social benefit. Biofuel from Microalgae is an economically viable solution to the characteristics of microalgae support for cultivation. For example, Different microalgae species can adapt to environmental conditions.(Moody,2014). Or the high amount of microalgae from each year cultivation. (Quinn,2011).Consequently, these characteristics illustrate a productive biofuel that can be consumed instead of petroleum fuel and first-generation biofuel in the long term and makes it possible to geographically optimize productivity potentials by cultivating specific species.  This is not possible with first-generation feedstock.  Traditional terrestrial crops have high tolerances to the soil, water, and other uncontrollable environmental factors. Microalgae do not compete for valuable agricultural land and represent a non-food based bio-feedstock.  The diversity of microalgae and their ability to grow in any environment enable cultivation locations where traditional feedstock is not feasible. The advantages presented have led to an increased interest in the microalgae biofuels process.

In the future, Microalgae from biofuel will more replace the fossil energy to consume with the vehicle than usual and changes the way which we are living to be more sustainable. Viesturs, Melece and Ligita (2014) report that after 2020, financial aid should be more provided to support biofuel’s project because it leads to substantial GHG savings. While HAB or harmful algae bloom is the environmental issue in Australia. (Ajani et al., 2013). It is recommended that government institutions, specifically the Ministry of Marine Affairs and Fisheries and Department of Environment give more support to study and monitor HAB phenomena throughout Australia. These two departments should work hand-in-hand with Australian researchers to find and draw better ways to predict, prevent, and mitigate the coming of HAB outbreaks in an area. Thus, a national level of HAB Task Force needs to be established soon.