Mercury occurs naturally in earth crust. It is release into atmosphere by functions like by human activities, weathering of rocks and volcanic activity. Human activity is major role to produce the mercury. All of living beings are exposed to some level of mercury, majority of people exposed to low level due to chronic exposure, whereas some people are exposed to  high level of mercury due to  industrial accident. Mercury may have toxic effects on the nervous, digestive and immune systems, and on lungs, kidneys, skin and eyes.

Through biogeochemical interactions in the environment, especially lakes, waterways and wetlands, mercury can be converted to a highly toxic, organic compound called methylmercury. Methylmercury is easily absorbed in the body than inorganic mercury which normally form a barrier to toxins through migration to cells. It also allows to cross the blood-brain and placental barriers to react directly with brain and fetal cells. The contamination of mercury causes a wide range of symptoms in the body .and affects the kidneys and neurological systems. Toxicological effects like growth, neuro-development, impaired reproduction and learning ability can lead to increases in mortality and the risk of predation for some wildlife, while low levels may not be directly destructive for individual organisms. About 33% of the mercury as of now discharged to the world's climate comes straightforwardly from human exercises. Another third originates from the seas through photoreduction at the surface and volatilization. Speciation changes occur continuously whether in a lake, a stream, or a sea and are hard to think about in light of the fact that they rely upon time of day and light power. For a geochemist this is a major test. 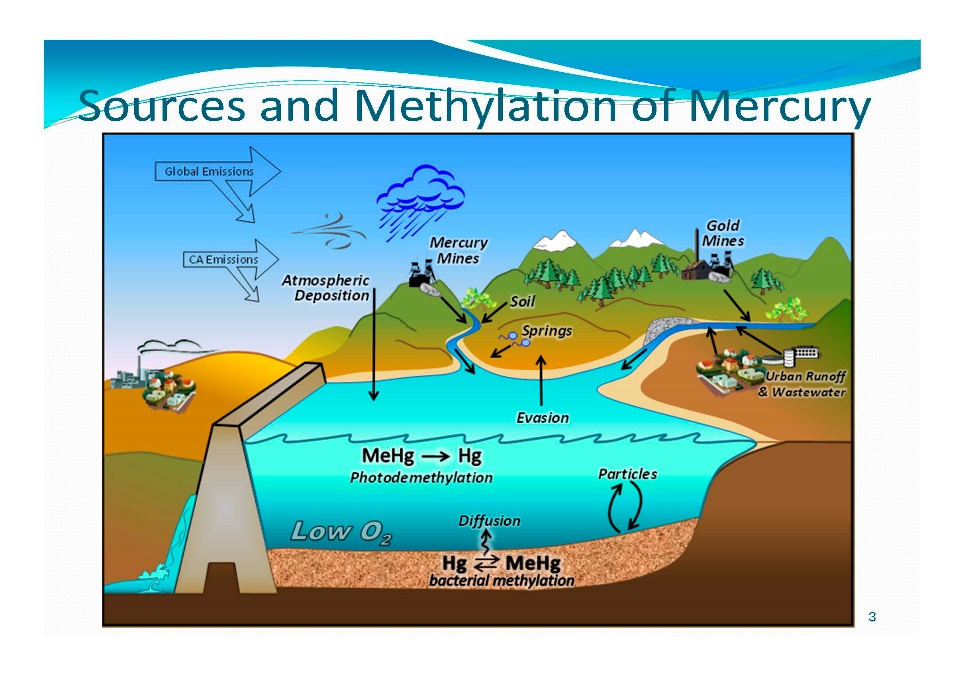 In figure shows that methyl mercury comes from various sources. It could be carried by wind and rain from near water bodies. Sometimes it is present in waste water from industry outlet and other sources. Mercury is also dispersed in soil followed by other sources. Also, in aquatic bodies mercury accumulate via mines and different types of energy generating plants. In majority of cases mercury comes non-toxic inorganic form. but when mercury in the contact of any kind of reservoir or water bodies then it settles down to bottom where bacteria convert into more toxic form i.e. methylmercury.

Hydropower plants or Hydroelectric plants use water to produce nearly a quarter of the world’s total requirement of electricity.

There are three types of hydroelectric facilities: impoundment, diversion and pumped storage. There are some hydropower plants that uses dams to produce electricity and some do not.

Hydroelectric power plants facilities range in size from small and micro plants to large power plants. Large power plants supply electricity to many consumers and have the capacity more than 30 megawatts (MW), while small or micro hydropower plants operates energy for individual needs or sell power to utilities. These plants to produce energy or electricity, use coal, fuel and other fossil fuels as a raw material, which end up formation of inorganic mercury as a part of process. This form of mercury is processed under aquatic biota, which lead to formation of methyl mercury.

Effect of Methylmercury on wildlife

Wildlife is also on the top list, which is affected by the surrounding methyl mercury concentration. There are some predator species of birds and animal (such as loons, merganser ducks, osprey, kingfishers, herons, and eagles), consumes fishes and detected as high concentrated sources of mercury. Apart from these predators, there are some predatory mammals like otters, found in south part of Ontario. There are early mortality in otters due to rise in methylmercury level, having toxic and behavioral changing properties. In addition these mammals also suffer from some reproduction changes, neurological effects and change in behavior as well. The severity of the toxic effects could vary on the terms of exposure and may range from little disabilities to death. Risk reduction strategies could be useful to protect human health, but is clearly not adequate for the protection of wildlife. Sine mercury is widely spread in Canadian environment, there results are real and immediate, when effects such as impaired growth and reproduction kidney damage, weight loss which might occur at even low concentration of methylmercury.

Methylmercury is also present in soil due to hydroelectric plants activity. so, it also acts as poison for vegetation by replacing soil nutrients because mercury acts as part of top soil. When dams are built for hydroelectric projects, flooded water flows on land, which lead to conversion of inorganic mercury into potent methylmercury. The methylmercury moves into water and consumed by animals, therefore on next step it would become the part of food chain. It is very hazardous to those live near to the hydroelectric projects. It is very dangerous to that people who are depended on locally caught food because concentration of mercury is high then they have to face the different type of diseases. Pregnant women and children are counted as most vulnerable part of population.

Some forms of adverse health effects of methylmercury exposure have been also studied, with the severity depending on the magnitude of dose. Human health risk are generally due to the contaminated methylmercury fish and sea food. As carcinogenicity is the basic property of methylmercury, which shows bad impact on the various human body organs, out of which central nervous system is most sensitive. Also, neurological effects of methylmercury in infants, children and adults are also observed. The most discussed examples of methylmercury contamination were occurred in Iraq and Minamata, during this incident high fatality rates and devastating neurological damages were observed. Because fetus is much more sensitive than adult, infants expose to methylmercury during Iraq and Minamata accident, were born with severed disabilities, mental and seizure disorder and blindness, etcetera. Sometimes there is accumulation of low concentration of MeHg in maternal body due to fish or sea food consumption, so the infants may born with normal appearance or functions but might later show some neurological defects or disorders after some ages.

Hydroelectricity is a renewable energy that facilitates to produce electricity with less greenhouse gases than other power plants. There are some adverse effect on environment of methylmercury due to hydroelectric plants like land use and soil interruptions, wildlife impacts, life-cycle global warming emissions.

Formation of methylmercury, results in some poor effects on environment. The concentration of mercury in fishes are found more than 50 percent, which is a major concern for the population. Methylmercury formed by bacterial action on ionic mercury, the leading environment contaminant for consumption advisories of fish in the United States, as well as globally. due to this mercury emission is everywhere and no other contaminant bioaccumulate to the extent of methylmercury.

Land Use and Soil interruptions

As we discussed earlier, hydropower plants depend on the size of hydroelectric generators and the topography of land. These plants require much land in flat areas than hilly areas. Hydroelectric reservoir has an extreme environmental impact because of flooding land like it destroys forests, agricultural land and wildlife habitat. Bacteria, which naturally occurs in soil, can convert mercury to methylmercury when land is flooded due to generating hydroelectric powerplants. Methylmercury is a king of chemical that can be easily absorbed in the food chain through their diet due to which people have to face many physical abnormalities.