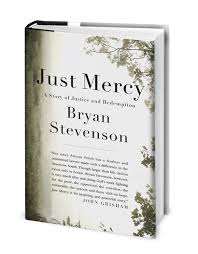 Every once in a while a book comes along that makes you think and even changes the way you have previously looked upon a subject. “Just Mercy” is such a book. This is the true story of a young lawyer’s fight for justice on the part of many on death row. The author, Bryan Stevenson battles racial injustice and represents many poor, non-white, mentally ill and young offenders. Their stories are interspersed throughout the book as he recounts his defense of Walter McMillian, a black man on death row. The memoir reads like a legal thriller, juxtaposing his many triumphs and failures.

Bryan Stevenson grew up poor in Delaware. His great-grandparents had been slaves in Virginia and this legacy of slavery influenced the way his grandparents raised their children and grandchildren. They particularly emphasized the importance of faith and education. Stevenson’s faith was cultivated in the African Methodist Episcopal Church where he played the piano and sang in the choir. Stevenson attended Eastern College, a Christian institution outside Philadelphia, and then Harvard Law School. His focus to defend the poor began during college when he took an intensive class on race and poverty litigation. He was required to spend a month with an organization doing social justice work. They sent him to Georgia to work with the Southern Prisoners Defense Committee where his first case required him to meet with a condemned man on death row.

In the late 1980’s, Stevenson’s legal firm first took up the cause of Walter McMillian, who was wrongfully convicted and sentenced to death for the murder of a white woman. The state’s case had many inconsistencies. They manufactured stories from witnesses who said they were with Walter when he committed the crime and disregarded accounts from many eyewitnesses who said they were with Walter at a church fundraiser. The legal system was determined to find someone to convict for this murder and decided Walter would be prosecuted because of his affair with a prominent white woman (a crime during this time period). The exposition of this case opened my eyes to the unfortunate fact that since prosecutors and police have legal immunity they can do considerable harm to innocent citizens when they are on the hunt for justice.

A large portion of this book deals with the cases of poor black children sentenced to adult prisons and serving life sentences. Stevenson tells these stories very convincingly and sympathetically. He challenges their sentences because he says they are juveniles and his firm recognized “the incongruity of not allowing children to smoke, drink, drive â€¦ because of their lack of maturity and judgement while simultaneously treating some of the most at-risk, neglected, and impaired children exactly the same as full-grown adults in the criminal justice system.” Circumstances that would bring a youth to be put in a situation where he felt his only option was to kill someone because he is not aware of his other options, should be recognized upon sentencing. One example is a young boy who shoots his mother’s abuser. Yes, punishment needs to occur, but placing a young child in an adult prison is not always appropriate justice.

Stevenson also defends many poor white women who have been convicted of the murder of their spouse or stillborn child. He tells the stories of pregnant women who are too poor to see a doctor or go to the hospital, and then unfortunately during labor deliver a stillborn child. These women are then arrested and charged with capital murder which is punishable by the death penalty.

Not all of the characters in Stevenson’s book are sympathetic and his defense of them does not always seem to be justified. As a defense lawyer his heart may sometimes get in the way of seeing their crimes objectively. In particular, he unsuccessfully defends a prisoner who commits the heinous act of killing a child with a bomb meant for a neighbor.

While justice has been denied for a large portion those in the prison system, the author’s faith in both the power of redemption and justice, underlines his continued hope in the possibility of change. “The true measure of our character,” Stevenson writes, “is how we treat the poor, the disfavored, the accused, the incarcerated, and the condemned â€¦ we all need mercy, we all need justice, and – perhaps – we all need some measure of unmerited grace.”