Second Moment of Area of a Beam (

Relation between Stiffness, Thickness and Load

For Steel and Brass beams:

Bending of beams under load is a common phenomenon observed in daily life situations and is a very important factor to be considered while designing a structure or a component.

This experiment mainly focuses on the deflections shown by beams with different materials and thicknesses. By plotting graphs for deflection (z) and load (W), it is observed that the graphs are straight lines for all the beams tested. This proves that the beams have deformed in their linear, elastic region and that ‘z’ is proportional to ‘W’.

Also, for same thickness of beams with different materials (Steel, Brass and Aluminium), it is observed that the steel beam has the highest stiffness value followed by brass and then aluminium. This confirms that the material property (Young’s Modulus) can determine the stiffness.

Bending in beams is a fundamental characteristic which must be considered while designing any structure or a component. This phenomenon is observed in daily life situations and are caused by stresses generated due to loads applied. These stresses in-turn cause distortion in the length of the beam. If the beam bends in its elastic region, there is no permanent deformation in its length i.e., the beam gets back to its original length when the load is removed. Along with stresses and strains, the material property also plays a key role in determining the stiffness of a beam.

It is the force applied to a component over a specific area and is given by,

It is the force applied to a component over a specific area and is given by,

It is the measure of stiffness of a material. (A material with higher stiffness has the higher value of Young’s Modulus).

If a graph is plotted between Stress and Strain, the gradient gives the Young’s Modulus.


Second Moment of Area of a Beam (

):
For a rectangular cross-sectional beam, the second moment of area is given by,

If a graph is plotted between Stress and Strain, the gradient gives the Young’s Modulus.

Relation between Stiffness, Thickness and Load

A beam with high thickness deflects less for a given load (W) than a less stiff beam. Stiffness depends on the material and dimensions of the beam. Stiffness (S) is the ratio of applied load to the deflection (z),

When a beam is loaded such that it bends only in the plane of applied moment, the stress distribution and curvature of the beam are related by,

Also, deflection of a beam subjected to a point load can often be expressed in the form of, 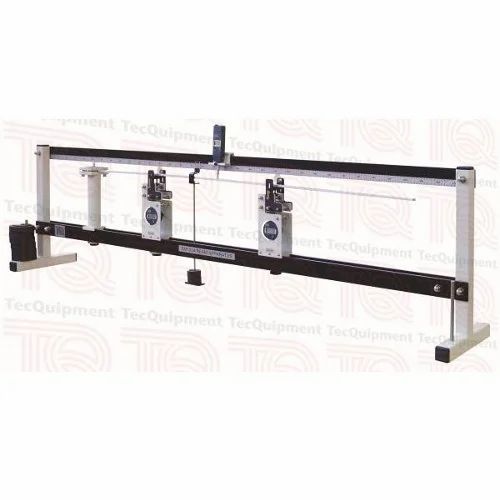 The main component of the beam apparatus is its steel frame which holds the beam, load cell supports, moving digital deflection indicators and the cantilever support. This whole setup sits on a level bench.

The digital deflection indicators measure the deflection of the beam at any point. The cantilever support holds the beam at one end. Load cells measure distance moved but have a calibrated support spring so that each 10N of downward force moves the indicator by 1 mm. They can act as reaction force indicators when not locked and simple beam supports when locked.

A weight hanger holds the weights to load the beam at any desired point on the beam. There is a graduated scale at the top of the apparatus which helps in applying loads at repeatable distances. Storage hooks helps in the storage of unused beams.

The deflections recorded for different beam thicknesses and loads are tabulated below.

For Steel and Brass beams:

To find the stiffness of each beam, plot a graph taking deflection (z) on Y-axis and Load (W) on X-axis and find the gradient of each graph. This gradient is equal to the inverse of the stiffness (1/S). The gradients of all the graphs are recorded in a table and their respective stiffnesses are calculated.

This graph is plotted by taking the stiffness value at constant load of 10N for different thicknesses. (6.4 mm, 4.8 mm, 3.2 mm)

Values obtained by Gradient of the Graph 4:

We know that Second Moment of Area for a rectangular cross-sectional beam,

for load acting at the centre of a simply supported beam.

Therefore, the theoretical value of ‘k’ is