Digitality is increasing each day. Very less people use 3D printers due to its high cost. And moreover, they are not portable as its calibration of stepper motors could be damaged. And small scale industries cannot afford them. So, my project is about making 3D printers that are size oriented, portable and cost effective. It will a project that would be hassle less and easy to understand and operate. It could be extremely useful to small scale industries, dental manufacture, scientific labs, toy companies and many more.

The reason behind choosing this project was to give a boost to small scale industries and make it easy to use. 3D printing is the technology of creating three-dimensional real time objects that has a nozzle which oozes out melted plastic element and is attached to a stepper motor which works as an axis that has two stepper motors working as two axis.

The idea and objective was to build a 3D printer under 500-1000$ with compact size for easy handling. Its aims to print a real-time three-dimensional object with the help of CAD file (computer aided design file). It focuses on building a small sized, easy to use and accessible 3D printer. It is also a kind that has low maintenance. It is a kind of printer that was made with the help of regularly used electronics devices which would ultimately reflect on its cost price in the market. Also, other major thing is its size as it is compact compared to other available printers.

I had planned all the work that was required to do on this project that includes all the pre-study work before the commencement of the project and post-work that is required after finishing the project. I listed out things to do first and then assigned its priority. I started with doing research on selecting the topic for my project and after its approval from the faculty, and then I went on doing literature surveys with the help of IEEE papers, research papers etc. in the later stage I began learning basics of CNC machine and designing of its hardware structure. Which was then implemented along with its software part and was made a portable one. At last stage, it involved final changes on the project and making a report on it.

I started with literature survey and then made up a block diagram for my project as shown under. It explains the complete flow of my project. I divided the entire process of 3D printing into two parts. 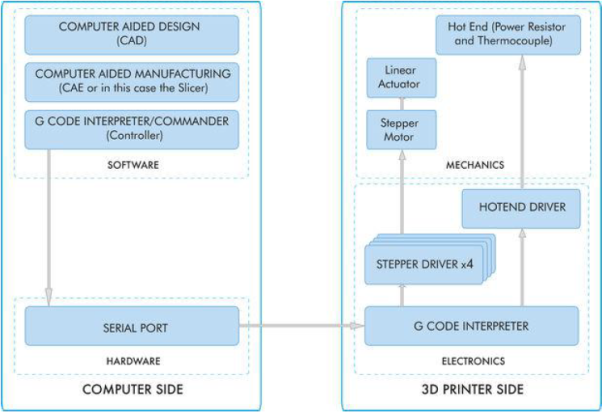 This project makes use of many components and each component was selected considering its cost and its potential value in the market as well as its ability to withstand the project. The important parts are:

1. Stepper motor – it is a kind of electric motor that is widely used in the industries of robotics. With each step of the motor, it makes it handy for repeatable positioning.

2. Stepper motor driver – A4988 – they are kind of drivers with microcontroller and that can be used to attain high rotation speeds in stepper motors.

4. Arduino Uno Microcontroller – it is used for digital devices and interactive objects which can control and sense the objects in physical world. It makes use of open-source hardware and software.

5. SMPS power supply – this is used to drive and supply power to the whole circuit

6. MDF/Acrylic for the body structure -it is used for outer covering or the hardware structure of the body.

1. 0.75mm Nozzle – it is cylindrical kind of a pipe or tube which controls the liquid.

For the 3D printer, a structure had to be made from either MDF, acrylic or fiber that would form the outer body. It also requires 4 stepper motor and its driver ICs along with providing a power supply. The stepper motor moves as per the GCODE which controls it. A software is used to generate the GCODE that is indirectly connected and formed from CAD file.

The working of my software part can be described as below:

Here, using different software like AUTOCAD, RHINO, CAD360, a CAD file is generated. The interpreter receives the CAD file formed and then converts it into GCODE file. For interpreting software like MERLIN, CURA, POLULU was been used. Then via serial port the GCODE file is sent to the other part i.e. the printing part.

Stepper drivers and HotEnd drivers receive the GCODE file from the GCODE interpreter. The HotEnd has a nozzle, DC fan and a ceramic heater and the stepper motor makes the moves as per the GCODE. Into the nozzle, a PLA plastic element is entered and with the help of ceramic heater it melts that plastic element into very small sized threads and is constantly cooled with the help of DC fan. As the HotEnd and stepper motor moves, the PLA comes out through it giving a 3D printed object. The object is made layer by layer and the stepper motor sets itself to initial stage after the completion of the object

During this project, I faced many challenges as my project is a very complex topic. It started with doing research on the topic. It was a new technology in the market and I had to collect as much information available. Deciding of hardware components was also a major task I had a pre-defined project cost that I had to maintain so that the final costing of the product doesn’t increase beyond the limit. I took help from the experts from the field of electronics and tried to follow their footsteps whenever problem occurred. The part of software was quite easy than I thought as I had already planned the flow of the work so I just had to follow that pattern to accomplish my microcontroller programming.

In 3D printing, whole process takes place in tiny little slices, it divides the whole project into tiny pieces which are made in the reverse order while printing. They stick together to form a solid object slice by slice. All the parts made from 3D printing can be complex like hinges, wheels etc. as a part of the printed object. It is a kind of technology which is very useful in current world. It makes the object feel like a real one.

My project required great knowledge while implementing. It was a great platform for me to learn new technology and to help small scale industry with my project. My creativity skills were expanded and with the help of my project guide I could overcome all the challenges that came on the way. I kept my guide and supervisors updated with my position of the project. And meeting were kept fortnightly to show my status on my project and to discuss further possibility of the project expansion.