Abstract– System requirements for power is growing in line with the needs in line with population and industrial electricity consumption, so there is an alternative to maximize the utilization of the transmission line, one of them with equipment Flexible Alternating Current Transmission Systems (FACTS). Hardware FACTS device in this research one of which is a Static Var Compensator (SVC) to maintain the stability of the voltage remains constant at face value by injecting reactive power into the system can be controlled. Tool OCP contained in the software Electrical Transient Analysis Program (ETAP) is used to determine the location and capacity of SVC by applying the Genetic Algorithm (GA). To test the proposed method, the system standard IEEE 14-bus and the 70kV-150kV transmission system 12 bus APJ Pasuruan used for simulation in this study. From the analysis of 12 buses can be evidenced by the placement and capacity SVC in Bangil2 bus with a capacity of 43.2 MVAr Qc can raise the profile of the voltage to fall within the permitted margin of 0.95 p.u. to 1.05 p.u. Reviewed Bangil2 bus, bus Bulukandang, buses and bus Pandaan Sukorejo.serta can reduce the power of 10.158 MW and MVAr be 9.9966 45.048 44.660 MW and MVAr.

IN RECENT YEARS, the needs of the electric power system in Indonesia continues to increase along with the demand for electricity and the increase in population and industrial electricity consumption. In this case the development and construction of new plants and transmission lines are needed to meet the needs of the growing burden. Akantetapi it is determined based on the consideration of environmental and economic factors. In addition to the prohibitive cost, the construction of new transmission lines also require a very long time[1].So there is an alternative to maximize the utilization of transmission lines, one of which is by using equipment Flexible Alternating Current Transmission Systems (FACTS)[2].

FACTS devices of several types of devices, Static Var Compensator (SVC) is widely sudah digunakan around the world, including in Indonesia itself has been applied in the GI Jember. Based on the standard PLN, the voltage value allowed on electric power system ranging from 0.95 to 1.05 pu of nominal voltage[3]..SVC Can maintain the stability of the voltage remains constant at a value nominalnya by injecting reactive power into the system can be controlled. Installation SVC at one point or some places could increase the value of the voltage profile and reduce power losses (losses)on the power system[4].

FACTS concept device was introduced by the Electric Power Research Institute (EPRI) in late 1980. Where the FACTS device can increase the capacity of the transmission system and control the flow of power (loadflow)is flexible[5].On the other hand FACTS devices can also reduce the cost of electrical energy generation and improve voltage stability of the transition state(transient)[6] [7].

Therefore, this paper will discuss the placement and the determination of optimal capacity SVC for voltage profile improvement 70-150 kV using Genetic Algorithms in the software ETAP Power Station

Modeling electric power system is defined as a network system consisting of components or electrical equipment such as generators, transformers, transmission line, and a load interconnected and establish a system.[8] [9]

Generatorsare modeled as a PV bus. Which generator terminal voltage at a constant value. This is because the generator using AVR (AutomaticVoltageRegulator) to regulate the voltage on the bus. On the bus references (SlackBus), generator dioprasikan by rating voltage and phase angle const ant. In mathematical equations active power (MW) and reactive power (MVAr) generated by the generator can be written as follows:

Pg and Qg=Active and reactive power is delivered terminal generator.

Power transformer of the power system can be expressed mathematically by the equation:

From the equation it can be seen that the mechanical power transformer primary and secondary winding is not connected, but electrically interconnected by electromagnetic induction.

Figure 2. the equivalent circuit transmission line medium and length of

In power systems, there are two kinds of modeling the load is static load and dynamic load.

Dynamic load model is a model that represents the active power and reactive follow the dynamics of the system variables, so that the condition can change at any time.

Static Var Compensator or called SVC is one of the FACTS equipment Device consisting of a reactor component with a large set of inductive reactive power compensation and capacitor as a source of reactive power, power electronics equipment as well equipped as a switching device. Broadly speaking, the function of which is to preserve SVC (controller) voltage stability remain constant at its face value.

SVC is a generator / load connected shunt static VAR where output is set for the exchange of inductive or capacitive currents in order to maintain or control the power system can be varied. TCR (Thyristor Controlled Reactor) at the fundamental frequency can be treated as a variable inductance

Where, XV is a variable reactance SVC while XL is the reactance caused by the fundamental frequency without control thyristor and Î± is the angle of ignition so that the total equivalent impedance of the controller can be expressed in:

Value rx = XC / XL is given by the controller limit ignition angle limit of value fixed in accordance with the design. control law The steady state contained in the SVC typical VI characteristic figure 2.3 is

where V and I are rms voltage and current magnitude and Vref is the reference voltage. Typical values for slope XSL is 2 to 5%, tehadap SVC base; The value is necessary to avoid passing the limit of bus voltage variation is small. A typical value controlled voltage range 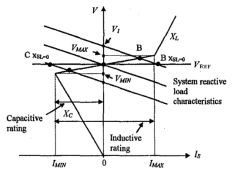 and the magnitude of the voltage

(k)).[11]In the mathematical equations of power flow can be written as follows:

is the value of active power (MW)

is the value of reactive power (MVAr)

ETAP (Electric Transient and Analysis Program)is a software full-graphics that can be used to design and test the condition of the existing electric power system. ETAP can be used to simulate the electrical power system offline in the form of a simulation module, monitoring the operation data in realtime, simulation, real time system optimization, energy management systems andsimulation of intelligent loads hedding. ETAP is designed to handle a variety of conditions and electric power system topologies both in the consumer side of the industry as well as to analyze the performance of the system at the utility. software Thisis equipped with facilities to support the simulation of such networks AC and DC (AC and DC networks),the design of cable networks, grid earth (groundgrid), GIS, panel design, arc-flash, coordination of protective devices (protective devices coordination /selectivity),and AC / DC control system diagram.

ETAP Power Station also provides a library that will simplify the design of an electrical system. library This can be edited or can be added to the information equipment. This software works by plant (project).Each plant must provide modeling support equipment associated with the analysis that will be performed. For instance generator, load data, channel data, etc. A plant consists of a sub-set of the electrical system that require special electrical components and interconnected. In Power Station, each plant must provide a data base for that purpose.

A few things to note in working with ETAP Power Station are:

Optimal Capacitor Placement (OCP) is one of the tools in the software ETAP Power Station which uses genetic algorithm for optimal capacitor placement. Genetic Algorithm is an optimization technique that is based on the theory of natural selection. An algorithm starts with the generation solutions with the diversity to represent the characteristics of the overall search space. By mutation and crossover characteristics that both have to be taken to the next generation. The optimal solution can be achieved through repeated generations. The most common method is based on a rule of thumb followed by running multiple power flow studies for fine tuning size and location. multiple power flow for fine tuning size and location.

Along the feeder are required to remain within upper and lower limits after the addition of capasitors on the feeder. Voltage constrains can be taken into account by voltage.

1. The system is in equilibrium (balanced)

2. All types are considered constant load

In the analysis of the placement and the determination of the optimum capacity of capacitors to improve voltage profile and reduction in power losses, papers It uses the standard IEEE as a reference point in the implementation process and workmanship. Testing and research with survey data obtained from PT. PLN (Persero) APP TJBTB Probolinggo. With the data obtained, it can be simulated transmission system APJ Pasuruan 70 kV and 150 kV using software ETAP Power Station. Simulations can be done in the form of power flow or Load Flow, which is to know the profile of the voltage, active power, reactive power and losses that occur in the system 70 kV and 150 kV After conducting a study of power flow it is known conditions of the bus who suffered voltage drop (under voltage).If there are conditions that decrease the bus voltage below the allowable margin (0.95

Flowused in the preparation of this study are as follows: 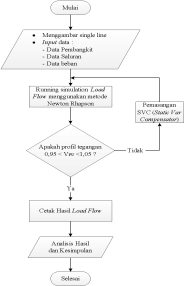 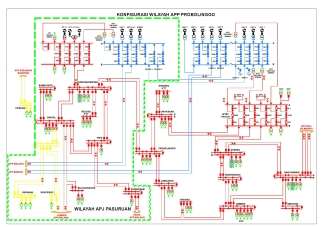 Creating modeling a single line diagram70KV transmission systems – 150kV APJ Pasuruan on software ETAP Power Station is the first step in the analysis. Where in this modeling will be included all the data – technical data which includes capacity, generation, channel, transformer, step-up the transformer and the load. 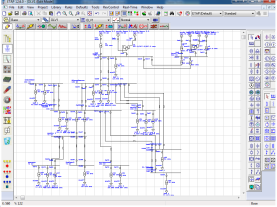 F. Simulation Load Flow using Software ETAP Power Station on the conditions of the base case 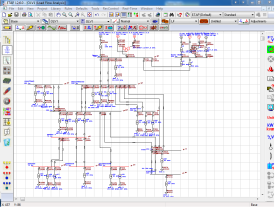 Figure 7. After the run with load flow in base case conditions.

Table 3. Profile voltage conditions of the base case 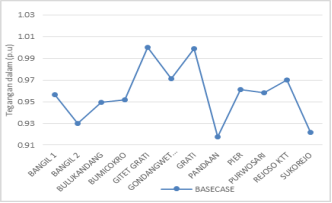 Based on the load flow inconditions basecase aboveand have been known to occur outside the voltage breach margin the permitted of 0.95 pu to 1 05 pu in Bangil2 bus, bus Bulu kandang, Pandaan bus, and the bus Sukorejo, it can be improved voltage profile by using analysis of Optimal Capacitor placement (OCP) for placement and capacity SVC.