My second career episode describes about my project named ‘Solar Powered Auto Irrigation System’, which deals with irrigation technique helpful for farmers. I made this project during my 7th semester of engineering. It was completed in six months’ semester duration. It was completed under the supervision of Prof. Ashima Kalra, electronics lecturer. I completed my Bachelor’s degree in Electronics and Communication from Surya School of Engineering & Technology, Punjab, India.

Solar energy is the most abundant source of energy in the world. It is a friendly form of energy as well as an answer to energy crisis. My project solar powered irrigation system will be useful for farmers. It just requires an initial investment and then it provides a free energy and is a green way for energy production. This system uses solar power that drives the water from bore well to tank via water pump. The controller automatically regulates the output valve of the tank. It also controls the flow rate of water and optimizes it for the use of water using moisture sensor. Thus, it needs to be used with available telecommunication technology. Plant growth and their produce are to govern or increased directly or indirectly by automating the agricultural field that monitors and controls climatic parameters.

The idea and goal behind opting for this project was to provide a system in which automatic irrigation can be done to plants which would help in saving water and precious time of farmers. It is designed and fabricated in such a way that it would provide fresh water to irrigate the crops to all the farmers.

The idea for pursuing this project clicked to me when I was analyzing the problems faced in daily life by common people. And then I realized that the methods of irrigation that is used is one of the oldest technologies having various methods in it. And we always want methods that are fast, efficient, and effective to deliver adequate water to crops. So, the new Agricultural solar method would ensure that the crops are being maintained and the farmers no longer need to slave themself to manual grind of having to carry water in their buckets.

I made a work flow plan for my project. I divided it into various parts to process through it systematically and assigned a time so that my project is completed in that period. First step involved to do some research work on the project and abstract realization. Then analysis on the components to be used was done. Then I started to prepare a block diagram and schematic diagram of the project. I also gave time to learn about the controller and its way of interfacing. And the last stage involved implementing the hardware and software part and gave a troubleshoot before writing the final report thesis.

The pre-implementation research work on the topic helped me gain knowledge on the components that are required. It involves:

These described above are the main building parts of my project. With the help of all these components its block diagram was prepared which is shown below.

The next step was to put this block diagram in practical implementation. I started with soldering component parts on the circuit and interfacing the LCD, sensor, and motor to the PIC18F4520 microcontroller. It was a little complex structure and involved deep concentration as any mistake would short the whole circuit. The later part involved designing the program on MPLAB software. It is a software that runs on PC and can be used to develop applications for microchip microcontrollers. It provides a single integrated environment that can be used to write programs for embedded microcontrollers and are also known as IDE, Integrated Development Environment.

The development cycle for writing an application code involves various stages. This controller allows embedded system design engineer to progress through this cycle without interruption between an array of tools. It allows engineers to concentrate on writing the code without any interruptions of separate tools and different modes of operation. The basic development system for my project involves the below stages. Using various available tools, a code is written, there is a project manager who organizes all file and databases and settings information. There is some hardware or software part that is useful in connection to the targeted controller and an assembler that is used for code conversion i.e. source code to machine code.

A flow chart was prepared based on the programming code that was used for my irrigation system. The steps and process along with the flow of program can be described using an algorithm as:

Step 1: start of the process

Step 2: GSM gets the initial power

Step 3: it will check for moisture level

Step 4: if the level is more than 50%, irrigation is not required

Step 5: irrigation is required if moisture level falls below 50%

Step 6: it initializes the motor

Step 7: gives a brief report about the process/progress

Step 8: after the completion of complete process it goes back to the original state. 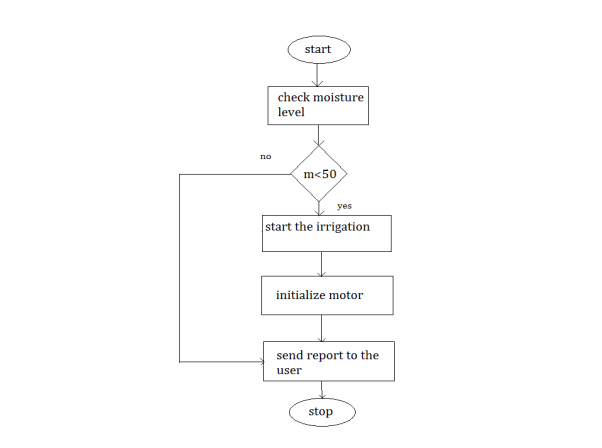 And the final stage involved to perform a test run and troubleshooting. I tried to solve the maximum problems and errors in the software by myself. If I was unsuccessful in them, I made a list of problems and errors so that I could approach my project guide for the help and learn the technique that would be helpful in solving such errors and later implement it by myself. This type of irrigation system can be customized as per the need and the type of crop and is also having low maintenance. It is designed and developed in such a way that it can be scaled and customized for large open fields or for greenhouses. It has lot of scope for future expansion. One can make use of temperature monitoring in compost production or internet controlled duplex communication can be implemented which would help in taking powerful decisions. Such systems require low maintenance and attention and give long term benefits economically and is environment friendly.

There were many stages which involved complication and trouble pursuing it. The very first and big challenge was to complete it on time. As the process and implementation was a long and tedious process it took time for making it perfect. I made lot of mistakes while synchronization and interfacing of the components with the controller on the circuit board which intern was a delaying my project and making it costly as many components were not interfaced properly and got broken. Even after all such problems I didn’t held myself back, I went on with my project by taking steps of guidance and consulted my professors as and when needed. In the end, it was completed and was made as I planned for it.

My project solar based irrigation system was completed on time and proved to the control system that gave real time feedback on monitoring and controlling of all the activities involving auto irrigation system very efficiently. It is a system that proved to be a manpower saver, that would incur profit and improve the production. It is a modernized structure in the agriculture industry with the optimum expenditure. In future, pesticides and fertilizer system can be implemented and added to this system so that it can be added automatically. It can also be developed so that it would measure the ambience temperature, humidity level or light intensity required.

This project was a building block in my career. It broadened my views in terms of technology and helped me develop and grow myself as an engineer and market ready. It taught me to handle difficult situations and made me strong enough.