When a regular metallic alloy is subjected to an external force greater than its elastic limit, it deforms plastically, i.e. the deformation persists after returning to the unloaded state. The Shape Memory Alloys (SMAs) do not follow this behavior. At low temperatures, an SMA specimen may undergo a plastic deformation of about few percent, and then fully recover its initial shape that had at higher temperature by simple heating above a threshold temperature. Their ability to recover their form when the temperature is raised, makes this class of materials unique. This phenomenon has been discovered in 1938 by researchers working on the gold-cadmium alloys [Gilbertson (1994)]. The shape memory effect remained a laboratory curiosity until 1963, when the first industrial and medical applications appeared.

During martensitic transformation of a SMA, the crystal lattice of the material changes its shape. The microstructure of martensite is characterized by a change in shape and by the difference in volume, which exists between matrensitic and austenitic phase [Duerig et al. (1990)]. Therefore, internal strains arise during the emergence of martensitic areas within the austenite. The internal strains can be partially relaxed by the formation of several areas of self-accommodated martensite crystals that minimize the overall deformation induced. These areas called variants and are oriented in different crystallographic directions [Kumar (2008)].

In the absence of external strains, these variants are equally possible and the distribution of self-accommodated groups allows the material to be transformed in order to retain its original shape. Therefore, the formation of the martensite results in elastic (reversible) deformations [Funakubo (1987)]. At constant temperature, the martensite-austenite interfaces are in steady state. A change in temperature in one direction or the other results in moving these interfaces to the benefit of one or the other phase structure. The interfaces can also move under the action of an imposed strain. A specimen can therefore be distorted not by sliding, which is the usual mechanism of plastic deformation, but by the appearance and disappearance of martensite variants [Kumar (2008)].

Therefore, during martensitic transformation atoms in the structure move on very small distances leading to deformation of the crystal lattice. This causes a small variation in volume with shearing of the structure in a specific direction. During the transformation process, the growth of martensite crystals occur in form of platelets to minimize the energy at the interface. 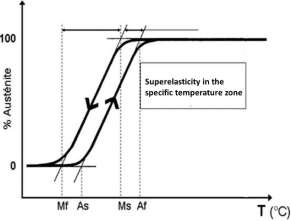 Several effects specific to the SMAs appear through the transformations of the crystal lattice as a function of temperature and of the field of stresses applied on the material [Duerig, Melton, Stöckel (2013)].

Therefore, a part from inducing phase transformation thermally, martensitic transformation can also be prompt by applying on the material appropriately high mechanical loading, resulting in creating a martensitic phase from austenite. When the temperature of the SMA goes above AF, shape recovery is resulted while unloading. Such behavior of the material is termed pseudoelastic effect [Kumar (2008)].

Another property of SMAs is the one-way shape memory effect. It takes place in four steps:

(1) The material is cooled to a temperature lower than MF (the parent austenitic phase) to obtain self-accommodated martensite.

(2) Re-orientation of variants of the martensite is obtained via application of stress.

(3) The stress is released at constant temperature T < MF. The material remains to a shape depending on the stress field.

(4) The sample is heated at a temperature T > AF making re-appear the austenitic phase and the material gets its original shape, as shown in Figure 2. 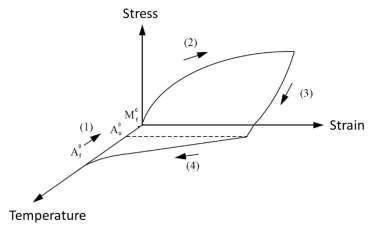 Two conditions are necessary for occurring shape recovery by shape memory effect. Firstly, the transformation should be reversible, and second, slip should not occur during the entire deformation process. Martensitic transformations in ordered alloys are reversible in nature [Miyazaki, Otsuka (1986), Arbuzova, Khandros (1964)], so the entire shape memory effect mainly occurs in this type of alloys. The second condition is necessary because in the case of high stress and every type of deformation mode (stress-induced martensitic transformation in parent phase, twinning in the martensitic phase) slip can be induced, resulting in plastic strain and, not completed recovery of shape.

In the one-way shape memory effect, the shape in memory by the SMA is the one of the parent phase.

The two-way shape memory effect is the reversible passage of a shape at a high temperature to another shape at low temperature under stress.

The two-way shape memory effect should precede the SMA training [Nagasawa, et al. (1974]. Training of SMAs consists of temperature cycling at constant stress or stress cycling at constant temperature. During training, microstructural defects (i.e. dislocations) lead to internal stresses and therefore promote oriented martensite. A SMA subjected to training can then move from austenitic phase to oriented martensite under zero load by simple change of temperature [Schroeder, Wayman (1977)]. It has then a shape in memory for each of the two phases.

Several experimental studies have shown the development of nonlinear plastic (irreversible) strain when phase transformations occur [Greenwood, Johnson (1965), Abrassart (1972), Magee (1966), Desalos (1981), Olson, Cohen (1986), Denis et al. (1982)]. This mechanism of deformation is termed Transformation Induced Plasticity (TRIP), resulting from internal stress rising from the change in volume related to the transformation, as well as from the associated change in shape [Marketz, Fischer (1994)]. TRIP differs from classical plasticity. Although plasticity is caused from the applied stress or variation in temperature, TRIP is triggered by phase variations, and occurs even at low and constant stress levels [Gautier et al. (1989), Leblond et al. (1989), Gautier (1998), Tanaka, Sato (1985), Fischer et al. (2000, 1996)]. TRIP takes place because of two separate mechanisms. The first, refers to a process of accommodation of micro-plasticity related to volume change [Greenwood, Johnson (1965)]. The other, refers to an orientation caused by shear internal stresses, favoring the direction of preferred orientation for the formation of martensite when and external stress is present, which involves change in shape [Magee (1966)]. TRIP is caused by the difference in compactness of the lattice structure between the austenite (parent) and the martensite (product) phase [Greenwood, Johnson (1965)]. During martensitic transformation, this difference has produces a change in volume as well as internal stresses causing plasticity in the phase with less yield stress, which is weakerÂ  [Paiva, Savi, Pacheco (2005)].

Arbuzova, I. and L. Khandros, Abnormal elongation and reduced resistance to plastic deformation due to martensitic transformation in the alloy CU-AL-NI. Phys. Metals Metallogr., 17(3), pp. 68-74, 1964.

Dunne, D. and C. Wayman, The effect of austenite ordering on the martensite transformation in Fe-Pt alloys near the composition Fe3Pt: I. Morphology and transformation characteristics. Metallurgical Transactions, 4(1), pp. 137-145, 1973.

Greenwood, G.W. and Johnson, R.H., The Deformation of Metals under Small Stresses during Phase Transformation, Proceedings of the Royal Society A 283, pp. 403-422, 1965.

Leclercq S., and C. Lexcellent, A general macroscopic description of the thermomechanical behavior of shape memory alloys, Journal of the Mechanics and Physics of solids, 44, 953-980, 1996.