The power of electricity was tested to discover the different ways electricity can be impacted upon. Distance was specifically experimented upon to see if the amount of space effected electricity’s ability to sense electrical charges. The problem of the experiment was tested by creating a homemade electrical field detector to put to test against three electricity inducing objects such as a balloon, a comb, and a plastic cup. The objects were each placed at a starting distance of 3 inches in front of the detector and gradually moved back until the LED light went out.  At the end of the experiment what was surprisingly discovered was that the detector was not able to pick up on any charge presented from any of the objects resulting in a failure to be able to answer the problem of the experiment.

The experiment in question explains the basic workings and capabilities of a simple electric field detector. Every circuit, transistor, wire, and resistor is arranged meticulously to create a large array of detectors to fit a specific purpose. The purpose is to expand knowledge and understanding of the natural forces, like electricity, that occur in nature. The research gathered from utilizing the electrical field detector reveals new scientific terminology and procedures. The research opens a new point of view into the true capabilities of electricity.

The experiment frequently refers to electric fields making a point to the term being a crucial part of the topic of the experiment. According to Thought Co. an electric field is, “regions of space around electrically charged particles or objects in which other electrically charged particles or objects would feel force” (Thought Co.). Electrical fields are produced when a positive charge shifts into a negative, and the direction the field moves towards is decided by which charge is active at the moment. When the electric field is repelled positive charges are in play. When a negative charge is in play the field will move towards the negative charge.

A circuit diagram acts as the blueprints for the electrical circuitry used in the construction of the detector. The diagrams are generally represented using specific symbols to show the different circuits needed for each section. There are two types of circuit diagrams used called pictorial and schematic. Pictorial style uses basic symbols and shapes to easily represent circuit diagrams to less experienced viewers. The schematic style uses standard industry symbols to give a more technical presentation of the circuit graph to more experienced personnel.

The detector’s ability to sense and detect the nearly invisible forces of electricity is fascinating. There are factors to look for when studying the power of electricity. Though the factors are used to discover ways to harness electricity’s raw power. The reason for seeking out ways to use the data is to advance growth in society. The advancement of society could lead to further extraordinary discoveries in the world of science.

In the Bible there are stories of God’s work on Earth and human life. One of His most celebrated works is the creation of the Earth. God created the terrain, flora, vegetation, and the changing seasons. In the experiment the power of electricity is tested to see how electricity is impacted. Electricity is a force of nature, as well as, a gift from God that contributes to many of today’s modern-day inventions. God’s gift of life can be seen in Nehemiah 9:6 which states, “You are the Lord, you alone. You have made heaven, the heaven of heavens, with all their host, the earth and all that is on it, the seas and all that is in them: and the host of heaven worships you.”

     Assembly of the Detector

      Repeat the steps three times for each objects to ensure the results are reliable.

      Record each trial’s results and calculate the average distance between the objects and the detector.

Distance from the Detector 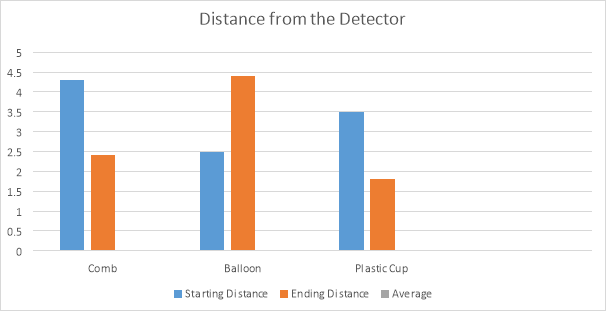       Due to insufficient data Excel was not able to create a graph with the limited amount of information so the graph above is an example of the intended graph for the experiment.

As the limited amount of results have shown there was a slight issue occurring with the functioning of the detector. The issue being that the detector could not perform the specific function of detecting static charge. The construction of the detector beforehand followed through smoothly as each piece was placed exactly in the spot assigned. The objects were prepared efficiently for testing as well as each object exhibited signs of being charged. The signs being the movement of hair in tune with the movement of the object, the slight crackling sound that is produced specifically from charged objects, and the act of repelling or attracting small objects within the objects vicinity.

Other possible errors could have possibly occurred within the experiment such as faulty equipment, incorrect pieces used in construction, and charges lost in testing. The errors presented are valid as to explaining why the detector did not work in the first place. Even after countless re-testing and re-constructing the detector did not seem to work. Different methods were even tested to see if any results would appear. The end result however was the same as the previous results, nothing at all.

Overall the experiment’s in depth exploration of electricity’s capabilities was surely interesting to learn and expound upon. During the whole process of conducting the experiment much was learned about the inner working of the detector and how electricity can be harnessed in small ways to perform certain functions. The experiment taught a great deal of the precision and meticulousness that goes into occupations dealing with the same materials as the experiment. The topic itself could have been looked upon in more detail if the results of the experiment were a success , but the failure did reveal the unpredictable nature of electricity. In the future the topic should be looked over again to expand more upon it for the advancement of society.

Peshin, Akash. “What are Semiconductors? And How Do They Work?” Scienceabc, Amazon Inc., N.d, https://www.scienceabc.com/innovation/what-are-semiconductors-and-how-do-they-work.html