Abstract— with technology scaling and increasing parallelism levels of new embedded applications, the number of cores in chip-multiprocessors (CMP) has been increased. In this context, power consumption becomes a primary concern in future CMPs because many of them are generally limited by battery lifetime. For future CMPs architecting, 3D stacking of last level caches (LLCs) has been recently introduced as a new methodology to combat the performance challenges of 2D integration. However, the 3D design of LLCs incurs more leakage power consumption compared to conventional cache architectures in 2Ds due to dense integration. In this paper, we propose a power-efficient reconfigurable hybrid last level cache architecture for future CMPs. The proposed hybrid architecture SRAM memory is incorporated with STT-RAM technology for using the advantages of both new and traditional technologies. The Experimental results show that the proposed method minimizes power consumption under multi-programmed and multithreaded applications.

In recent years, to address the requirement of new data-centric applications for larger memories and to break the memory wall problem, on the other hand, architects have dramatically increased the size of Last Level Cache (LLC) in the memory hierarchy. However, the increasing power consumption not only leads to increased cost and dark area but also leads to an increase of chip temperature. Increasing chip temperature and creating hot spots leads to reliability problems in the chip and reducing chip lifetime. In this regard, some architectures and techniques have been proposed for power management to reduce the dark area in multi/many core systems[1].

Memory modules and cache banks are important components of on-chip storage and have a big portion in total chip-multiprocessor (CMP) and power consumption [2]. Emerging Non-volatile memory (NVMs) technologies with desirable characteristics such as near-zero leakage power, high density and etc. in comparison to the traditional technologies are ideal for using in next-generation CMPs to combat dark silicon. Nevertheless, they suffer from shortcomings such as a limited number of writing operations and long write operation latency and high energy. In order to overcome the mentioned disadvantages, we need to exploit SRAM and STT-RAM as two different types of cache banks. This heterogeneous point of view leads us to the best design possibility with using the benefits of both memory technologies. The major contributions of this paper can be summarized as below:

The rest of this paper is organized as follows. Section 2 reviews the prior related works. Section 3 describes the details of the proposed hybrid reconfigurable cache hierarchy with a problem formulation. In Sections 4, experimental evaluation is presented. Finally, section 5 concludes the paper.

A number of works have been done to reduce power consumption of hybrid memory architectures in embedded systems. In work [3] proposed a hybrid cache with access-aware policies and partition-level wear-leveling scheme to reduce power consumption. The study in [4] focused on a hybrid cache hierarchy, which uses a reconfiguration approach, and a statistical prediction engine to improve system performance in CMP. Their technique is based on this fact that every technology has higher bandwidth in the specific range of capacity so they have used several technologies based on bandwidth demands of running applications. Based on non-uniform cache architecture, many previous works used hybridization of SRAM and Non-Volatile Memory (NVM) technologies that have higher storage density and near zero leakage power consumption to reduce leakage power and energy in LLCs. In research [5] proposed a hybrid SRAM/STT-RAM L2 cache that assigns a write counter to each block of the cache. After writing access to each block of the cache, the related block counter counts up. If the value of the counter passes a predefined threshold, the related block is determined to write intensively and migrated from STT-RAM part to the SRAM part. All of these approaches either use a lot of specific thresholds to distinguish parts of the cache or require high hardware overhead to predict cache behavior. In this paper, we use statistical information instead of using a specific threshold to distinguish banks in a non-uniform cache architecture.

Fig. 1 shows a 3D CMP with two processing layers connected by TSVs. The bottom layer is a 4×4 tile-based system that forms a 2D mesh, each tile consists of a core, a private L1 cache, and an SRAM bank of a shared L2 cache. In the top layer, 16 STT-RAM banks are placed as backup L2 cache that they are power-off at the first of workload running.

In this design, we have three aspects: First, a hybrid cache is used (i.e. a large capacity of STT-RAM, together with small-capacity SRAM). Second, STT-RAM banks are divided into two groups that are shared by all cores. As shown in Fig. 1, the banks in orange color are local space in STT-RAM banks that we use them for migration and the banks in gray color are used only for replication. Third, we adopt a DNUCA architecture for the shared L2 banks.

A.    Metrics of Interest

Our proposed method consists of two policies: turn-on policy and turn-off policy. There are three factors are used to make decisions.

At the first period of workload running, cores are used shared L2 caches in the bottom layer (SRAM) as LLC. At the end of each period, we determine the behavior of each cache bank in the next period by monitoring the behavior of the cache consist of utilization, hotness and sensitivity in that bank. Actually, this information is utilized to guide the power-on, power-off, data replication policy and data migration policy in each bank.

Table III.  main  Configuration parameters as used in the experiments.

Replication of data blocks is one of the power-saving approaches in this paper. In other words, the data block location is not limited to a single bank. We use these replicated blocks that waste the capacity of cache due to storing the redundant information to reduce the frequency of costly memory access. Since STT-RAM banks in this paper have overall capacity 4 times SRAM banks, we have the extra capacity to apply replication. But STT-RAM banks suffer from the shortcoming of the limited number of writing operations, therefore we control the amount of replication by using counters for each bank. We distribute the number of writes among free spaces in replication space each bank. We divide the local space each bank into three groups that have the same capacity and use one counter for each group, therefore we totally use 48 counters to distribute writes in STT-RAM banks.

To evaluate the proposed method, GEM5 simulator with NoC simulator [6] is used to design and simulate our proposed architectures as shown in Fig. 1. The main parameters of the simulation configuration are listed in Table III. Each core has a private L1 instruction and data cache. All cores share a L2 cache that is divided into 64 banks. The area of a core tile in the core layer is 3.5 mm2 estimated by McPAT [7] and CACTI 6.08]. We use synchronization based multithreaded workloads selected from PARSEC [9], SPLASH-2 [10] and Phoenix [11] for multi-thread workloads.

Fig. 3 shows the normalized IPC metric. As shown in this figure, the proposed design improves IPC performance on average up to 5.9%, and 33.4% compared with the SRAM-baseline, and fixed-hybrid design, respectively. But, the IPC for proposed hybrid style is reduced by 2.1% on average compared with the baseline1.

Fig. 4 shows the percentage of SRAM and STT-RAM used in the proposed hybrid memory architecture. Our design uses 52% of SRAM and 48% of STT-RAM memories on average for benchmark applications. As illustrated in this figure, for applications which are heavily memory accessed like canneal or read-intensive like streamcluster, the percentage of STT-RAM is more than SRAM. It is because of that the proposed technique turns on STT-RAM banks incorporated with SRAM banks to solve the shortage problem of last level cache for these types of applications. When a workload is read intensive, due to the lower read energy and read latency in STT-RAM in compared to SRAM technology, STT-RAM banks are turned on and corresponding SRAM banks are turned off, therefore, in this scenario, the number of turning on STT-RAM banks are more than turning on SRAM banks. The difference between the percentages of memory technologies in our proposed design can be explained due to the small amount of writing-intensive data blocks or lower leakage energy of STT-RAM in comparison with SRAM. 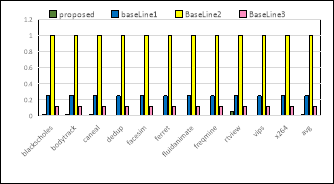 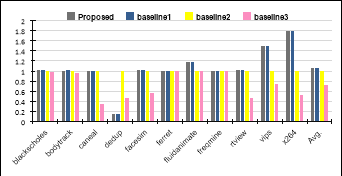 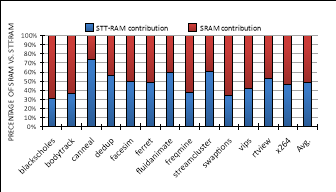 In this work, we proposed a novel reconfigurable last-level cache architecture. In this paper, we propose an energy-efficient reconfigurable hybrid last level cache architecture for future CMPs. In this proposed hybrid architecture SRAM memory is incorporated with STT-RAM technology for using the advantages of both new and traditional technologies. Our results show that our proposed method are effective in improving the average of power consumption (96.4% ) and the performance (5.9%) compared to the state SRAM cache banks.