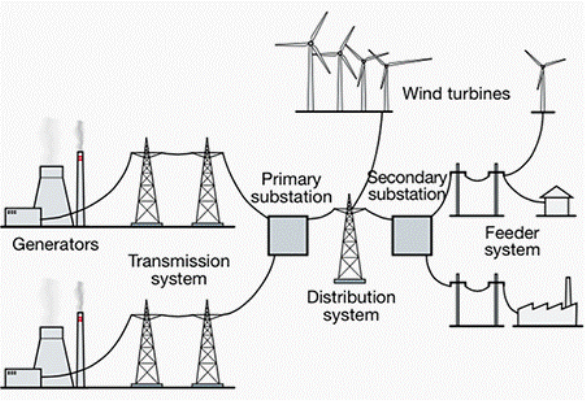 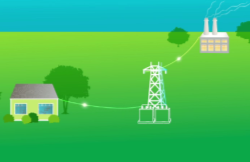 The smart grid introduces a two-way interaction, where electricity and data can be exchanged between the generation plant and the end users. It is an ever-expanding network of computers, controls, automation and innovation working together to make the power grid, more secure, more reliable, more efficient and more environmentally friendly. Smart grid enables the generation from new generation sources such as wind, solar and tidal, as well as traditional power stations. With the ongoing advancements in smart grid technologies, a smart grid will replace the existing infrastructure of the power grid. This will leave better communication between end users and generators to help manage our electricity needs.

A recently released study by the PNNL (Pacific Northwest National Laboratory) reviewed American homeowners who had updated to new smart grid technologies to monitor and control the consumption of energy within their homes. The outcome of the study showed that the average house could have its annual electricity boll reduced by 10 percent. This could be a saving of nearly $200 billion in the USA alone. The overall result would leave homeowners with lower rates, and have the environmental impact of taking the equivalent to 30 million vehicles off the road.

With such a massive stake to gain, it is clear why there is a big drive for ‘Smart Grids’ in the 21st century.

I propose to design an electrical power grid, which will provide power to an Electric Arc Furnace. The furnace will have many of different loads that vary from charging electrodes, to large cooling water pumps. The power for the Electric Arc Furnace will be provided from two independent sources. A Steam Generator Power Station and a Wind Farm.

The Electric Arc Furnace will have three vertical electrodes that conduct an alternating current that forms an arc between them and the layers of the scrap metal in the furnace, causing the metal to melt. Each electrode would use 5MVA of power at 11kV. As well as high power electrodes, the Electric Arc Furnace would require additional appliances. These include water-cooling pumps, auxiliary oil pumps and induced air draft fans. These appliances will all operate at 415V.

To provide power to the power hungry Electric Arc Furnace there will be two power sources located on the same site as the furnace. The first will be a Steam Power Station. Two steam-powered generators will produce a combined power output of 240MW. They will generate at 33KV and the voltage will be dropped down for distribution and transmission. The Power Station will have its own appliances similar to the Electric Arc Furnace that will enable it to generate electricity. There will be four motors used by the high-pressure steam boilers in the power station. To ensure that there is a constant supply of electricity for the power stations motors there will be a connection to the National Power Grid. This connection to the grid is will only necessary when Turbo Alternator 1 & 2 are both not generating electricity for the network. During normal operation, the circuit breakers to the grid will be open.

Two steam driven turbine generators are not the only power sources in the electrical network. Placed on the same site as the Electrical Arc Furnace will be two Wind Turbine Generators. The two Wind Turbines will generate a combined 4MW at 11KV. These two generators will be renewable energy sources that harness the energy in passing wind. They will not require fossil fuels unlike the power station. Similar to the Power Station, there will be a supply to the Wind Farm from the National Grid. This is to provide start up power for the Wind turbines. Once the turbines are operational, the link to the National Grid is will not be required. During normal operation, the circuit breakers to the grid will be open.

Transmission of power between the three sites outlined will be via overhead 66KV transmission lines. Electricity will drop down to the usable voltage at each site via transformers. 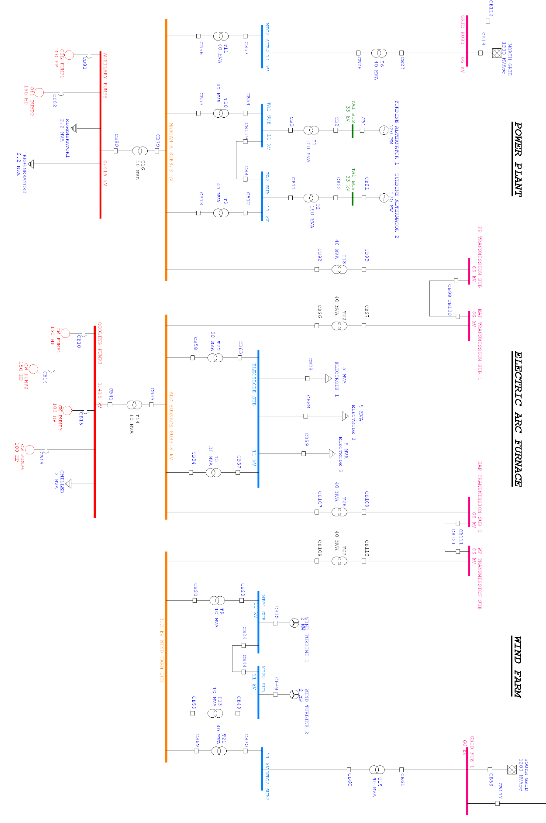 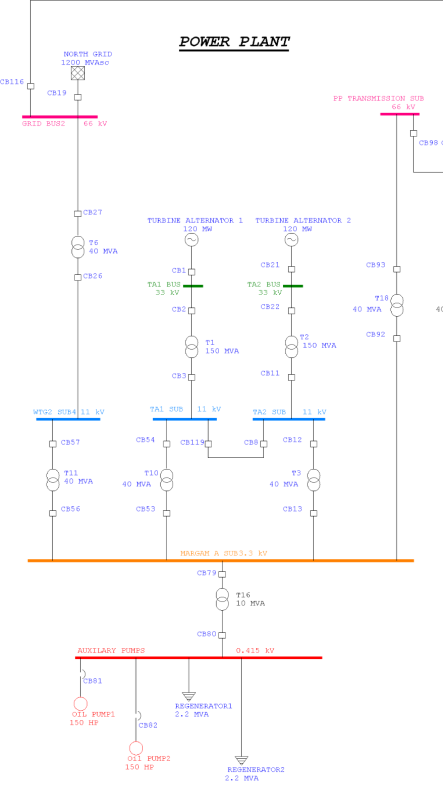 To the right is the Power Plant section of the electrical power grid. It is the main source of electricity for the grid. It provides power from two 120MW steam turbine generators. It has a link to the Utility Grid but this is only enabled when the two generators are not generating or when they running up. The Generator auxiliary pumps always require power from either the grid connection or the Turbine Alternators to enable the Turbine Alternators to generate power.

To the right is the Electric Arc Furnace Section of the Electrical Power Grid. It is the main consumer of electricity in the grid. It consumes power through three 5MVA Arc Electrodes. The Electrodes are used in the Electric Arc Furnace process to create iron from raw materials. For the process to operate successfully all three electrodes and their cooling pumps must be operational. If there is a drop in power provided to the process then it may become endangered because of the high temperatures involved. Due to this danger through loss of power, there must be redundant power supplies to the process. These supplies are provided from a 66kV line from the Power Station Section and a 66kV from the Wind Farm Section. If one were to fail there would always be a redundant supply from the other to provide power to the Electric Arc Furnace Process. 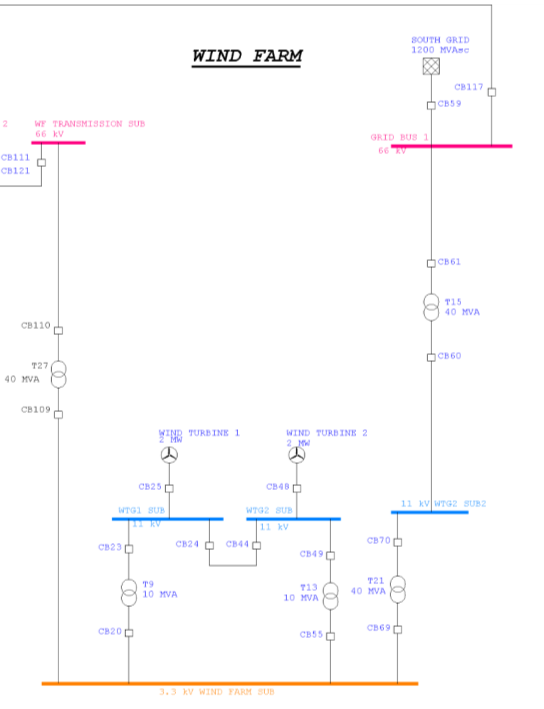 Below is the Wind Farm Section of the Electrical Power Grid. It is a source of renewable energy for the grid. Renewable energy is provided by two 2MW Wind Turbines, which generate electricity when wind turns the generator windings. There is no consumers of electricity on this section leaving it completely independent of the rest of the grid in the event that both its lines are lost. This is highly unlikely as there is a 66kV line to the Power Station Section and a 66kV to the Electric Arc Furnace Section. A second link to the Utility Grid provides a backup in case the first connection at the Power Station Section fails.

My electrical power grid has 3 separate sections interconnected by transmission lines. These transmission connections provide redundancy protection in the event a section connection faults. The main electricity producers for the electrical power-grid operate at 11kV but for transmission purposes, the power is transmitted at 66kV. This is because line losses are much lower at higher transmission voltages over large distances. Having lower line losses improves the efficiency of transmitting the power, therefore resulting in operational cost savings.

The smaller the cross sectional area of the cables, the less the loss to heat dissipation. Large voltages require smaller surface area, resulting in less line loss. In my example of a power-grid, the voltage is being stepped up at the generating section, transmitted through the transmission line to a load section, and then stepped down to lower voltages required by the load.

This is shown in the following equation:

During the design stages of an electrical power-grid, a load flow study should be performed. A load flow study can outline if electrical grid voltages stay within their specified limits during normal or emergency operating conditions. The study also determines whether equipment such as conductors and transformers are overloaded. A successful load flow study can calculate the voltage at each bus, the voltage drop on each feeder, and the power flow and losses in all branch and feeder circuits.

The most common uses for load flow studies include:

The important data retrieved from a load flow study is the voltage profile of the electrical power-grid. When voltage changes a lot throughout the system, large reactive flows will occur. This will then lead to larger real power losses. When a bus has an unacceptably low voltage, it is essential to install capacitor banks in order to provide reactive power compensation to the load.

“AN INEFFICIENT OR UNBALANCED LOAD CAN CAUSE UNPREDICTABLE BEHAVIOR” 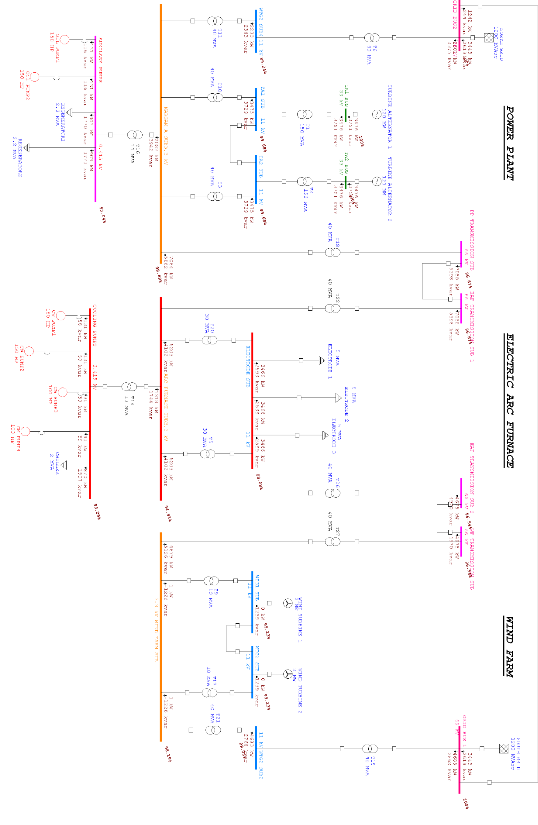 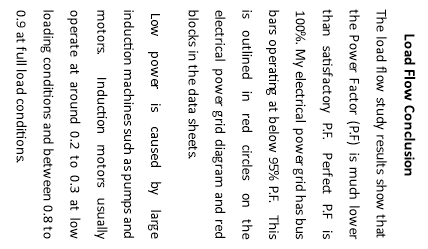 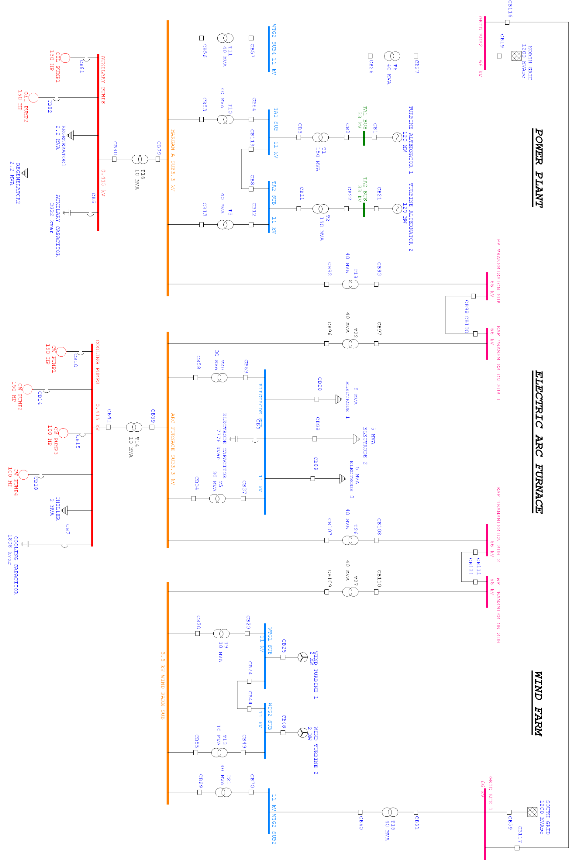 Below shows the redesign of the Power Plant Section of the Electrical Power Grid. Outlined by a red circle, a capacitor bank has been added to the 415V Auxiliary Pump Bus. It can be switched on and off when P.F correction is needed. 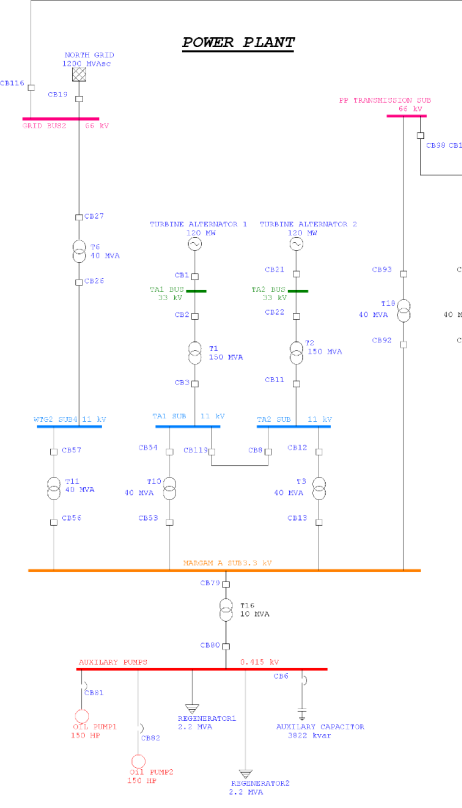 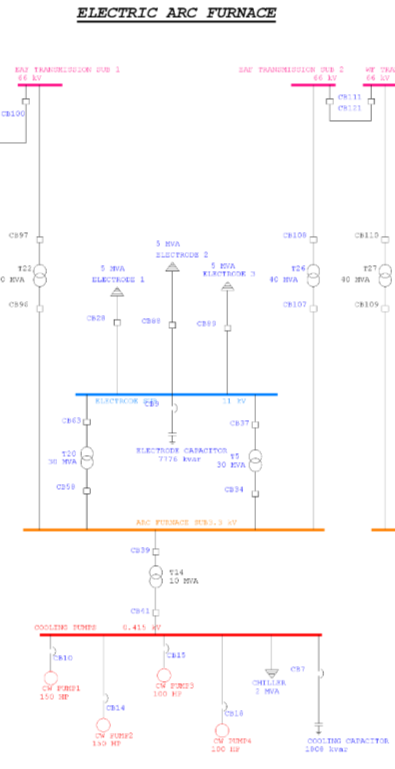 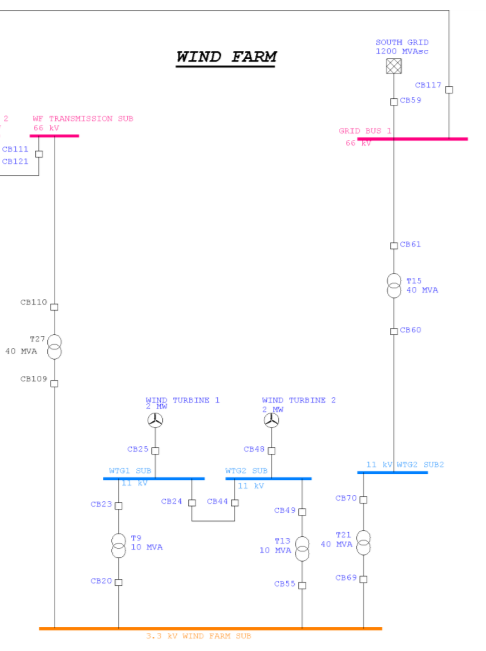 No change has been made to the Wind Farm Section of the Electrical Power Grid.

The significant effect of harmonics in an electrical power grid is the increase of current in the system. This is more prominent in the third harmonic, which causes a large increase in the zero sequence current. This requires a lot of consideration in when designing an electric power grid to drive non-linear loads.

Electric motors will incur losses due to large hysteresis losses caused by eddy currents in the iron core of the motor. Since the harmonics are at higher frequencies, they produce higher core losses in a motor than the power frequency would. The result of this is the increased heating of the motor core. If excessive, this will reduce the life of the motor. The 5th harmonic will introduce CEMF (counter electromotive force) in large motors, resulting in the opposite direction of rotation. CEMF does not have enough force to counteract the rotation, however it does reduce the rotating speed of the motor.

Capacitor banks have been included on the re-design of the electrical power system on to reduce the effects of harmonics and bring Power Factor to a suitable value. Their value has been specifically calculated to suit each bus bar they fed. This compensates the reduction in Power Factor. 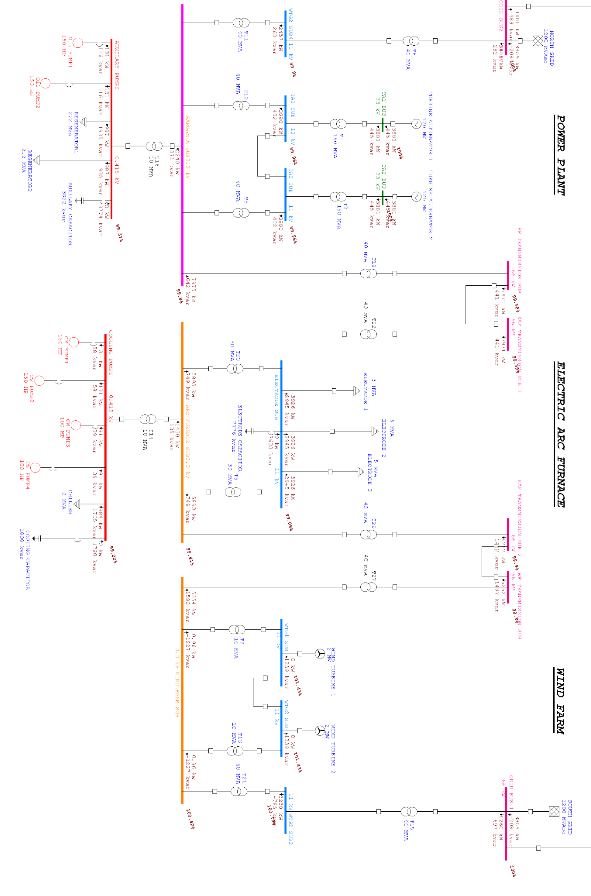 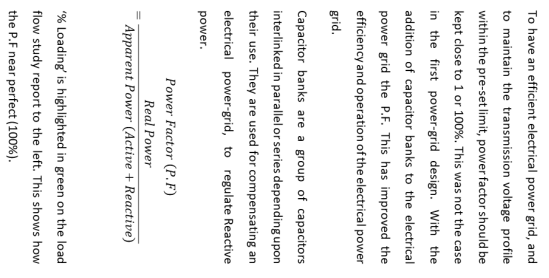 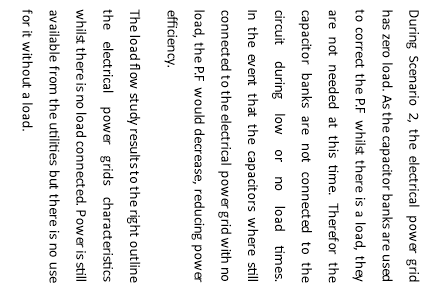 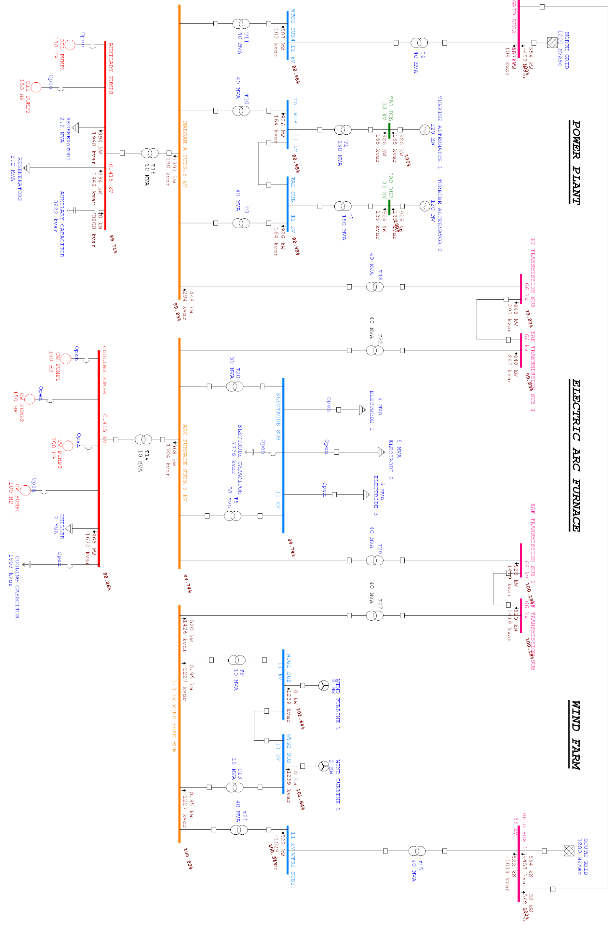 Energy Networks. (n.d.). Who is my network operator? Retrieved from http://www.energynetworks.org/info/faqs/who-is-my-network-operator.html