Police lights are a significant aspect of many emergency vehicles, as its one of their most recognisable features, which informs the public that indeed the given vehicles is an emergency vehicle. This system is controlled by in system controls within the vehicle itself, which allow the user to have full control of the lights system, determine how and when the lights come on or go off, and even how the police light behave in terms of how they flash.

Principle behind the circuit 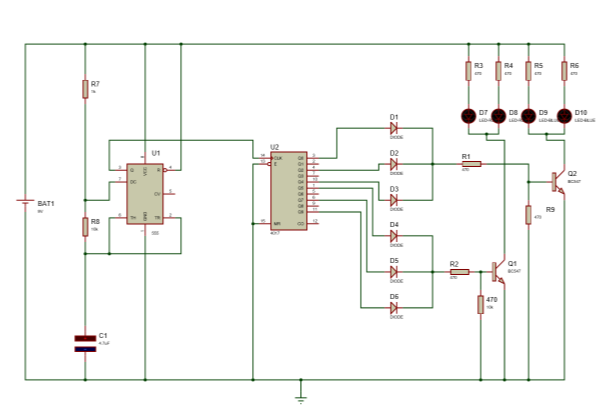 When trying to resist the flow of alternating or direct electric circuit a resistor can be used in order to perform that action, this piece of component is placed in the electric circuit, depending on the circuit and how it functions the location of where the resisters are placed will vary. In electronic circuits a resistor is typically used to either limit or divide the current, protect an electric circuit or reduce voltage. When the charged particles(electrons) move from one region to another it is known as electric current. the shape of a resistor is cylindrical. There are many different types of resistors that have different values, when using resistors, you can identify the value of the resistor by looking at colour coding, resistors have something known as a colour band, a resistor can have 3,4 or 5 colour bands, depending on the resistor value. When the temperature is constant the current density is directly proportional to the electric field, which obeys ohms’ law.

A component such as a capacitor can be used when needing to store an electric charge. When electrical energy is added to the capacitor it is known as charging, however when energy is release from the capacitor it is known as discharging. A capacitor has two metal plates, which are separated by a non-touching layer which is called a dielectric. Electricity from a direct current or an electrostatic source charges one of the plates. When power is supplied through a circuit electrical charge will gradually build up in the plates. While one plate gains a positive charge, the will gain a negative charge. When you integrated a capacitor within a circuit that might contain a lamp or motor, the charge of the capacitor flow through the lamp or motor, until there is no charge remaining gin the plates. The capacitance of a capacitor is the amount of electrical energy the capacitor can store, the bigger the capacitance the more electrical energy it can store. There are a wide range of capacitors available on the market, such as Air, Mica and Paper, depending on the intended purpose, different capacitors are used.