1.1 This career episode is based on my design and fabrication project carried out during the penultimate year of my bachelor’s degree in Mechanical Engineering at Rajiv Gandhi College of Engineering (Anna University Affiliated)-Sriperumbudur, Tamil Nadu state, India. Established in 2001, it is a self-financed and one of the best engineering institutes in Tamil Nadu. The project was completed over a period of 3 months from December 2012 to March, 2013.

1.2 The project on “Pneumatic Auto Gear Changer” was carried out in order to understand and implement theories in gear change application. Its purpose was to analyze the various steps involved and to provide recommendations for a real world use of this technology. I carried out this project as a part of a group of four people. In this project, a push button was used to activate/deactivate a solenoid valve and at the time of gear changing, the switch was triggered and the solenoid valve was activated. This in turn causes the compressed air to go through the pneumatic cylinder. The compressed air pushes the pneumatic cylinder as it passes through a tube and henceforth changes the gear from one speed to the other with the help of a gear box arrangement.

1.3 The automatic gear changing structure is relatively useful in low cost automation in all automobiles. Pneumatic systems work at higher speeds and the manpower requirement is reduced due to this project. The design and the implementation of this project in the real world application was made and a detailed report was submitted.

This project work was supervised under Mr. Manoj Kumar, the associate professor in the department of mechanical engineering at Rajiv Gandhi College of Engineering. As it was an open ended project, I had to look up through several online journals, document reviews and also took guidance from the head of the department on various projects and ideas. The project time was quite limited and had to be come up with a proper design plan before the actual start of the project. This proved to be quite a challenging task as this was the first real world project in my career. However, I was completely aware of the fact that, these would be the kind of challenges and problems I would face in real life as a professional engineer.

Some of the duties I was involved in during the course of this project were as follows:

As a first step of the project, I explained my thoughts on doing this project to my supervisor. I carried out my research regarding the project and presented him the importance of the project before carrying out the project.Â  The present scenario gear changer plays a vital role in automobiles.Â  Manual transmissions have become uncommon in many cases of cars sold across Australia, North America and some parts of Asia. However, they remain dominant in parts of Europe and other developing countries. Hence, I did an analysis on the present day vehicles equipped with automatic transmission option and those that are not and further highlighted the importance of the project in the present and future of automobiles as well as in certain machineries.

After deciding on the project, I carried out numerous literature reviews in order to come up with an appropriate design plan and to acquire the necessary equipment needed for the project. However, the articles and writings published on the topic was quite limited and were available for only specific cases.Â  As my project was regarding the project pneumatic gear changer, I did my extensive research on the pneumatic side of the project. Furthermore, I reviewed the advantages of pneumatic system and discussed with my supervisor for the usability in the project. Pneumatic system and was best considered due to its following reasons:

In this project, I used a reciprocating compressor as the key component for the supply of compressed air. I selected the appropriate equipment for the project after evaluating the suitability of information acquired from several sources. A compressor is an instrument that sucks in air and gas at an optimum pressure and deliverers the air back at a higher pressure as the output. It was very important for my project to select the appropriate compressor as pneumatic systems operate primarily on the supply of both compressed air and pressure into the system. Moreover, I had to make sure, clean conditions were maintained during the phase of the project as warm and moist air could result in precipitation of condense from the compressed air. The following is the schematic diagram of pneumatic auto gear changer used in this project. 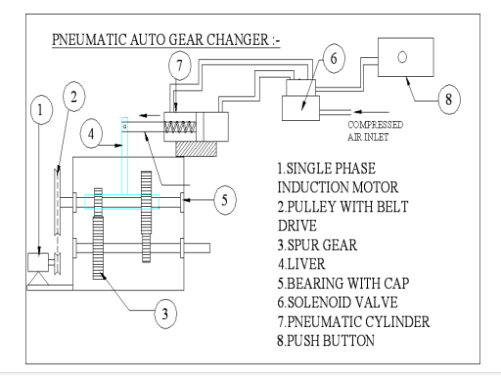 I also considered an important element for this project which was the push button. The push button switch was fixed near the driving seat of the vehicle. Besides this, I had set up an air tank with fully filled compressed air in it. Prior to gear changing, the solenoid valve was activated by triggering the switch. The compressed air streamed from the air tank to the pneumatic cylinder as the solenoid valve was open. Likewise, at the time of compressed air inlet into the cylinder, the pneumatic cylinder moved forward and the gear box liver moved along automatically from one position to the next. The gear box liver was further activated which allowed the vehicle running at different speeds. I have highlighted the advantages of this type to my supervisor and was duly approved and appreciated by him. They are as follows:

However, some of the disadvantages of this type were as follows: 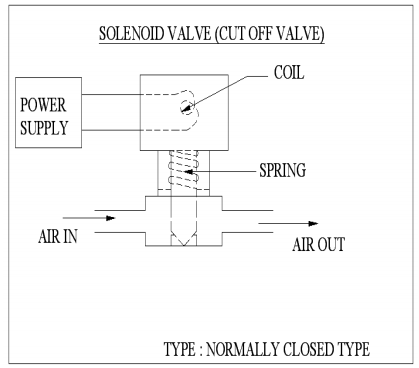 This project presented me with the opportunity to understand the applications of theoretical knowledge that I had acquired in class rooms to implement in a real world project.Â  Discussions during the project with the supervisor provided great insight to challenges presented throughout the project.Â  The challenges uncovered were resolved by use of appropriate technical skills. This project also helped me understand the working and execution of any engineering project and served as a stepping stone to the real world. Overall, I am very happy that I could contribute myself effectively to this project at its various stages and also helped to secure the highest possible grade for this project.