Determine the neutral current in the unblanced 4-wire star power system shown in figure1. Express the answer in both complex number and polar forms.

Use a simulator to confirm the magnitude of the nuetral current which is eqaluated.

Now to find neutral current IN, we need to add I1, I2 and I3 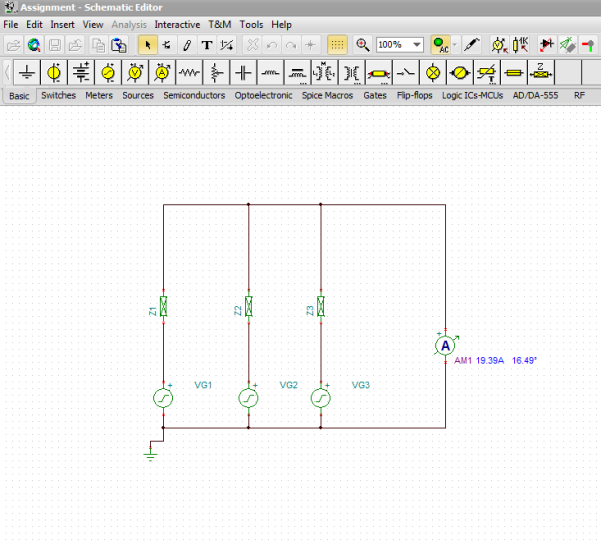 Use the three-wattmeter method on a simulator to determine the total effective power dissipated in Figure1. Confirm this answer by calculation. 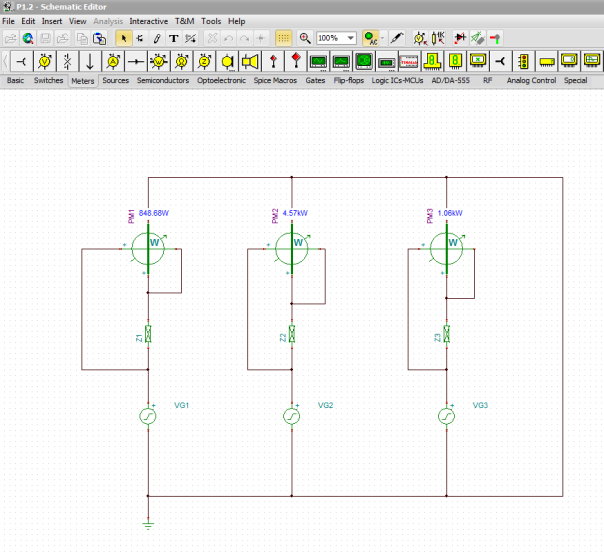 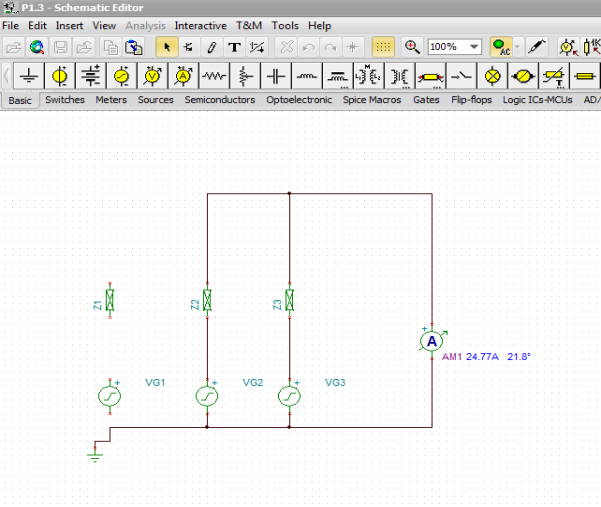 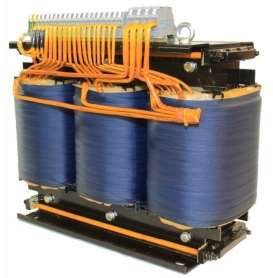 Transformer is a static device which transfers electrical energy or power between two or more than two circuits using phenomena of Electromagnetic induction. It takes the current of one voltage and converts it into a different voltage. The amount of transferred energy from Primary circuit to the Secondary Circuit is equal, and the losses are ignored. The frequency of the circuits does not change but the voltage and current of each of the individual circuit is changed, it is increased or decreased, unless we use the transformer as a one-to-one isolating transformer.

Basically, the transformer perform the function of changing electricity from high to low voltage by making use of the following properties of electricity.

Voltage is known as the measure of the “Force” or “Pressure” that is used to push the electrons around the circuit.

A common transformer involves a ferromagnetic core which ensures that values of magnetic flux linkage remain high. But there are some factors related to the ferromagnetic materials that are responsible for part of the loss associated with power transfer. These losses are as follows:

Core losses can be classified as the sum of eddy currents losses and the hysteresis loss. 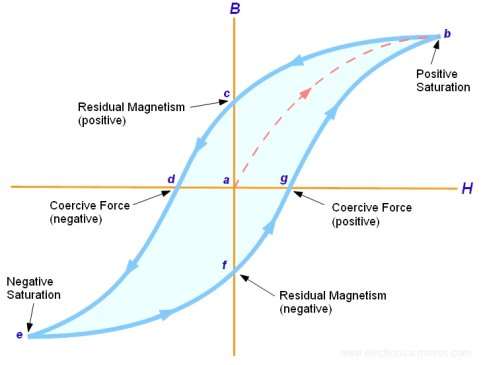 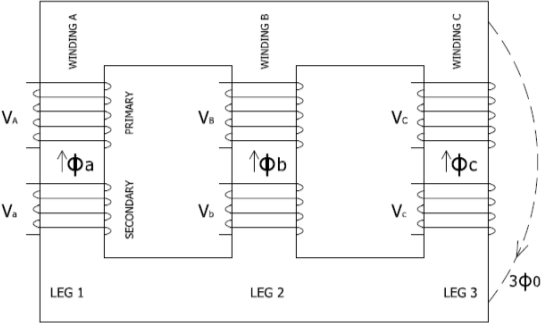 A single-core three-phase double wound transformer consists of three sets of primary and secondary windings, individual set winded on each leg of the core made up of iron. The windings consists of turns made up with the insulated wire. These coils are then mounted on a magnetic core material in such a way that the magnetic flux produced by one coil increases and ensures that the most of the magnetic flux links with the second coil so that mutual induction is being increased. The coils are spaced 120 degrees apart. The transformer is filled with a dielectric oil and thus provide insulation in-between the winding and case. These windings are either connected in star or delta configurations.

Delta system proves excellent for distribution system for short distances. These types of transformers are used in neighbourhood and commercial loads of small magnitude near to the substations. There is one kind of voltage present between the 2 wires in the delta system. This system is shown by a Triangle. The voltage between any two wires will be the same and from each individual point of the Triangle, wire emerges which represents a three phase.

For a star connection, voltage of two lines is the same as the voltage on a 3 phase system. In Star connection, each of the windings are made up connecting each individual winding end to end and this point is the “star point” or “neutral point” of connection winding. Connection for neutral and 3 phase connections are then taken out of transformer. 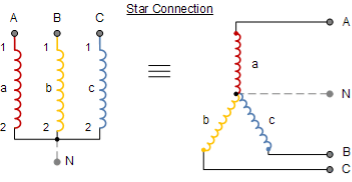 An electrical engineer may put a transformer in a circuit for many reasons. If the device being powered require higher power than what is available locally or the powered device needs frequency matching, a transformer is placed in such circuits. For example signal and audio transformers are used to couple amplifiers and microphones to the input of the amplifiers. 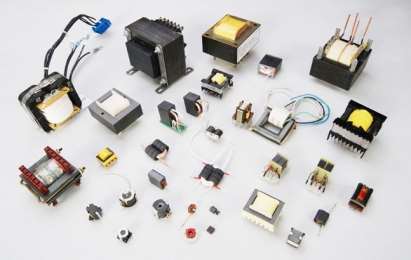 When driving through a rural area, power polls and overhead power lines can be seen and transformers are placed on these power polls by power utilities. Utility substations make use of transformers to deliver power of certain usable level and quality to consumers and businesses. 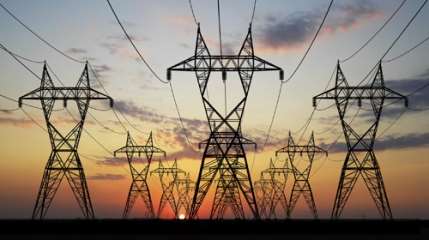 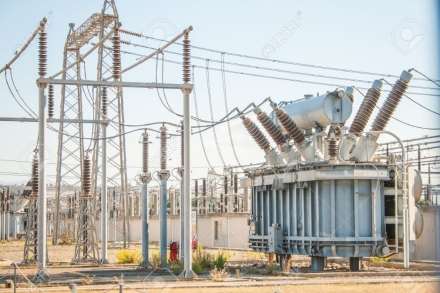 Every electrical device uses transformer in one way or another. Almost every commercial building has at least three or four large high power transformers in order to provide required voltages to operate overhead lightning system, telephone system, heating, operating electrical equipment in labs and much more. 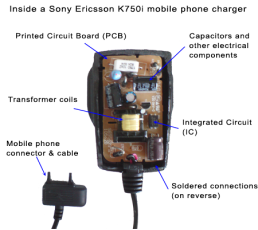 There are a lot of transformers used in many appliances at our homes that require different voltages for their operation. Electric appliances like dishwasher, washing machine, microwave and fridge require comparatively high voltages between 110 and 240 volts, the devices like laptops and charger mobile phones and MP3 players require relatively low voltages. A laptop charger requires up to 15V while mobile phone charger requires up to 6V and M3 chargers require up to 12V to charge up their batteries. Thus, these appliances have small transformers built in them which convert the domestic supply of 110-240 volts into a low voltage that they require for their operation.

Three-phase system is used in power transmission because less amount of conductor is used to transmit electrical energy to different places.

Three conductors carry 3 alternating currents peak values of which reach at different intervals of time. If a conductor is taken as a reference point, there is a delay of time by one third and two third of a cycle of the current for the remaining two currents. Because of this delay in the available phases, constant power is transferred over each cycle of current. 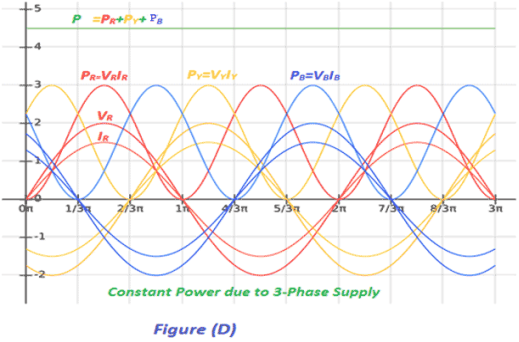 There can or cannot be a neutral wire in three-phase systems. Neutral wire is used to allow a higher voltage while still supporting the appliances operating at lower single phase voltages. As loads can directly be connected between the phases so there is no neutral current wire in high voltage distribution. 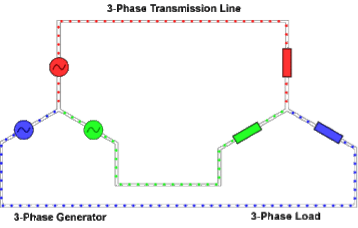 There are many factors that make three-phase system very desirable and reliable in electric power systems. In a load which is linearly balanced, the phase currents cancel each other and add up to give a zero which also helps in eliminating the neutral wire. Phase conductor carry same amount of current which means that they all can have a same size of conductor for balanced conditions. Moreover, the transfer of power in the system is constant for a linear system, it reduces the vibrations in a system.

Electricity is generated at the power station at around 10kV by rotating a coil in the magnetic field. In power stations, all the generators are synchronised so that they all produce electricity that oscillates together. For more efficient generation, three windings are used on the generator to produce three-phase electricity.

For distribution, the following types of resources are available for the generation of the electricity. 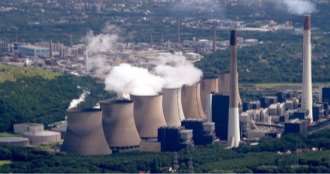 Thermal energy or the Nuclear energy is used to produce steam for the turbines that drives the rotating AC generators to produce electrical energy.

Potential of water is stored at a higher altitude and is made passed through the turbines which in turn drive the generators. 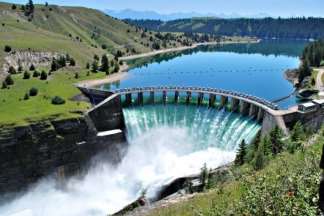 Winds blowing at high speeds are used to drive the turbines that are coupled to the rotating AC generators. 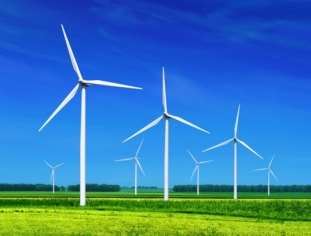 Transmission has an important role between the production of power and the usage of power. Transmission lines carry high voltage electricity over long distances from power plants to the consumers. Once the power is generated. It is send to the substation in the power plant where the voltage is stepped-up using step up transformer for transmission purposes.

When the voltage is stepped up, it helps in the reduction of the transmission losses. It is then sent to the grid station from where it is further transmitted to different cities.

For transmission over long distances, transmission lines are made up of conducting materials like aluminium and power loss is always associated with these conducting materials. This is because if the current through the wire is “I” and the resistance of the wire is “R” then an amount of electrical power “I2R” is dissipated as heat. This will result in a much less power at the receiving end than the actual power generated at the station.

Thus, when power is transmitted at a high voltage, wires of low current carrying capacity are used so there is no need of thick wires that cost considerably high instead they can be replaced by thin wires that cost less.

The transmitted power from the power grid is stepped-down to 110,000 volts from 230,000 volts using a step-down auto transformer. Then for the distribution of power for industrial uses, the power is again stepped-down to 11,000 volts from 110.000 volts by step-down transformer located in the streets. This reduction in the voltage increases the current in the wires and thus the losses but greatly reduces the cost of power poles and increases the safety.

The distribution substation further reduces the voltage to 230 volts or 440 volts for the local transmission for domestic purposes depending upon the need of the user. Some business and houses require two or three-phase power supply while the others only need single phase supply.

ï‚· Operation of the transformer:

Transformer works on the principle of mutual induction. According to Faraday’s Law of electromagnetic induction:

“Rate of change of flux linkage is directly proportion to the induced emf in a conductor or coil with respect to time.” 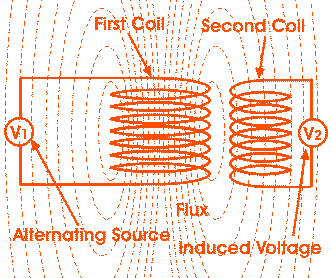 Electric motor is a device which performs the operation of converting electrical energy into a mechanical energy. The induction motor is known as a three-phase AC motor which is widely used in the industrial applications as they are:

Induction motor is also known as asynchronous motor. Due to inductive coupling, the generated electromagnetic power is transferred to the secondary winding. These windings are being separated by air gap between them. 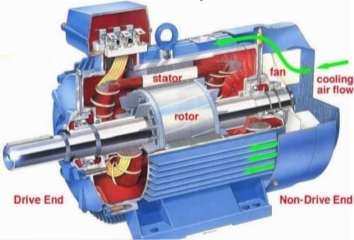 The induction motor consists of a Stator and a Rotor. The motor frame is permanently attached with windings of very low resistance. When current and voltage is applied to the terminals of Stator windings, a magnetic field is produced.

Induction motors are most demanded motors in the industry. Some of their applications are given below: