for the island of Cyprus, and so it should remain. The Nicosia Friends Association considering the historical value of the site supports that the building is marked among the timeless places of the island that the Municipal Theater was, and should remain, a serious outbreak theatrical, educational, and entertainment building for the country. It is an essential part of the city’s story, one of the capital culture incubator unnecessarily deprived the last eight years.

It is more than a melancholic and sad spectacle, the image of an important building abandoned and left to the mercy of time! Such buildings are living organs in our culture, and shouldn’t be allowed to collapse, be useless to stand as haunted corpses waiting for the bulldozer to demolish mercilessly, eliminating them from the map of a town! There are some buildings that have acquired life and soul because of the role they have played or continue to play within our own lives. Because the building is not just a functional and aesthetic personality, but also a cultural, historical and a point of reference landmark in the city.

Despite all the possible errors in the functionality or controversial style that a building might have, it is still commonly accepted benchmarks and objectively speaking important in our lives. The Municipal Theater of Nicosia, was a building that was a living cell in the cultural pulse of the capital for years. Without doubt, this building, even several decades ago, when it was designed, was anachronistic in style. The exterior being a neoclassical housing, with pediment and columns, in contradiction with its modern for the time interior. But what is important is to realize that creating a building, we create an “object” that can indeed be made from inanimate materials but has life and character of the time used and operated by its people.

This building was more than such an organic mechanism, as it was called by locals, the instrument for cultural activity of Nicosia for many years, the area where the Cyprus Theater Organization lived the greatest of glories, which thrived on the stage of our leading actors, which hosted so many artists from all over the world. A place that hosted many outstanding and of high importance theatrical performances, political ceremonies, numerous works of world repertoire, musical performances by top musicians around the world, and was the focus of cultural life in Nicosia.

In describing the property references and drawings of the front, rear, left and right side elevations will be used, section, plans and structural analysis drawings. (Still pending- under processâ€¦))

The property is a Theatre of neo-classical style that was built in 1966 and it has been used for theatrical and dance performances, musical concerts, and other political and national ceremonies. It has the capacity of 1220 seats, central ground floor sitting and balcony seats, but also contained smaller dance studios and theatrical practice rooms on the rear sides of the building, and dressing-rehearsal rooms at the rear back of the building and underground. On the underground you could also find all technical material and equipment for the theatres use. The main accommodation is on two storeys with a further cellar/basement level below the rear part of the property. A marble covered façade occupies the front of the building but no damages occurred to it from the roof and structure collapse, nor cracks or decay signs.

Before collapsing, the theatre was the main stage of the Theatrical Organization of Cyprus. As an only 50 years old building, its current structural and architectural stage raises several concerns by the locals, as it is considered a quite new, for its historical value, building. The Nicosia Municipal Theatre was designed by Pefkios Georgiades in 1966, a prime architect of its time in Cyprus, and built in October 1967. It has not only been Cyprus Theatre Organisation’s (THOC) centre of performances but the first choice of use by foreign artists as well. In July 2002, the municipality had chosen the same architectural practice to revise the theatre’s renovation in order for any upgrades to take place, having contemporary needs and safety protocols in mind. In March 2005, the responsible for the renovation construction company had been chosen and contracts were signed (A. Panayides Contracting Ltd) with the refurbishment works coming into completion by November 2005 for a total cost spend to reach â‚¬5,580,072. After less than 3 years’ time, in June 2008, Cyprus experienced a disaster which could have been a tragedy, which could have caused a painful reference in the memories of the people of Cyprus for generations, as few hours before the roof collapsed there was a performance going on. The roof collapsed overnight on an empty theatre, few hours before a sold out, end of year performance, with the audience to be filled mainly with children and teachers. The fact that the roof structure collapsed only 2,5 years after the government expended nearly â‚¬6m on the buildings refurbishment is in any architects and engineers eyes a shocking, unexplained incident, with many still wondering
“What caused the entire roof to collapse so soon after so much . money were spent on improving the structural integrity of the building?”

The construction of the original design has been proven as conventional throughout and, from an optical examination, contained no rare detailing or materials which might arouse structural problems. The ministry of Culture denied any access to the public into the details of the structural report. The public announcement included a statement saying only that it seems like “the steel structure’s resistance, on which the roof was placed, was not evaluated correctly among other things.” It also addressed that the structure failure occurred on a part of the roof where only a replacement of the crenelated iron pieces of the roof and nothing to do with the support beams as any replacement or maintenance to them was believed to be needless. Furthermore it was said that the steel shears capability to endure the weight of what was going to be suspended from them was overestimated and wrongly calculated.The Inspective Committee stated as a final reason for the incident, “technical reasons that caused the failure”. In general, the buildings material where mainly local stone for the walls construction, concrete for the foundations, marble exterior facades, wooden interior wall facades and lastly steel for the roof structure with steel shears as the covering material. The beams structure used, according to the public structural report released to the public, was a combination of the Quadrangular Truss and the French Truss along with Vertical Struts. A structure that can handle the shape and such function that the architect originally designed, for this kind of long spun structure of distance up to 60 metres long (197ft).

This building has been a prime figure for Cyprus capital city, but yet was abandoned and left at its since then stage, ever since June 2008, when the structure collapsed, with no plans for reconstruction of the roof, although there is a high demand by the majority of Nicosians, the municipality is under a legal fight over the incident in contradiction with all those guilty in 2010. They sued the contractor, architect and engineers and requested a full payment for the reconstruction fee, assessed to be about â‚¬4m to reinstate the theatre.

Parts marked with A and B was not part of the truss strength structure but they were placed there to be an additional frame work to upkeep the elevated roof and the stresses. 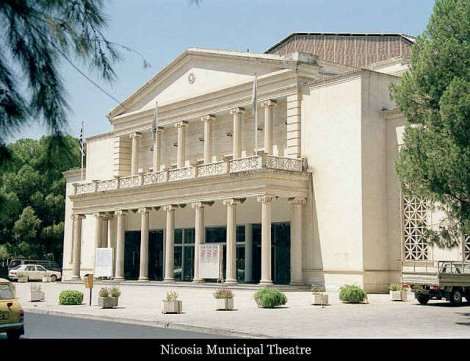 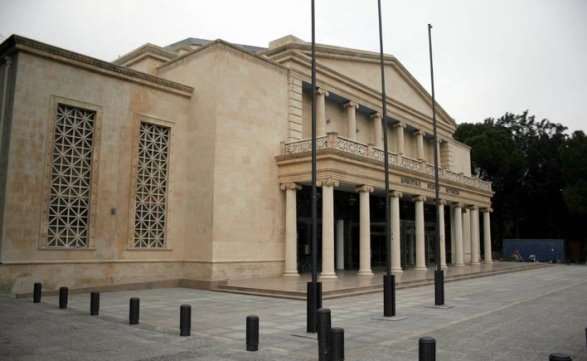 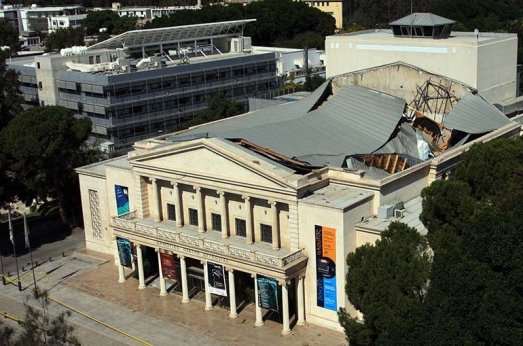 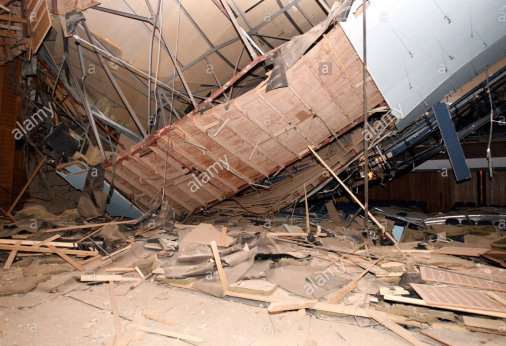