The Newton-Raphson method or the other name called Newton Method, is a powerful technique for solving equations numerically. Like so much of the differential calculus, it is based on the simple idea of linear approximation. The Newton Method, properly used, usually homes in on a root with devastating efficiency. In this research, the Newton-Raphson method load flow analysis will be modified. It is modified to attain compatibility for the AC/DC systems with unified DC links in the ac network. The modified Jacobian equation includes the DC real and reactive power at the AC/DC buses and their dependency on the AC system variables. The AC/DC test system with a load flow computation in MATLAB will be evaluated by using modified Newton-Raphson method.

Electric power transmission was primitively developed with direct current. The availability of transformers and the development and of induction motors at the beginning of the 20th Century, led to greater appeal and use of AC transmission. The research and development on multi-electrode grid controlled mercury arc valve for high powers and voltages was carried out in 1929. There use in conversion processes for transmission and frequency changing was carried out in 1930’s. DC transmission now became practical when long distances were to be covered or where cables were required. After the Second World War, the research on HVDC got stimulated, particularly in Sweden and in Russia. In 1950, a 116 km experimental transmission line was commissioned from Moscow to Kasira at 200 kV [1].

HVDC transmission is now an integral part of the delivery of electricity in many countries throughout the world. In view of rapid growth in demand and supply of electricity, electric power system is becoming increasingly large and more complex. Moreover, regular electric supply is the sheer necessity for growing industry and other fields of life. The power industry planners are demanding stronger trend towards supplying electric power of higher quality by improving the system security and its impact on environment in parallel with pursuit of economy. In real life situation, the criterion of perfection is never met, because there are deviations between the model and reality. Load flow and state estimation analysis are important tools for deciding the stable operation and control of power system as well as future planning of power systems [2, 3].

The first commercial HVDC line built in 1954 was a 98 km submarine cable with ground return between the island of Gotland and the Swedish mainland [4]. Thyristors were applied to DC. Transmission in the late 1960’s and solid state valves became a reality. In 1969, a contract for the Eel River DC. Link in Canada was awarded as the first application of sold state valves for HVDC transmission [4].

The main objectives of this research are:

Load flow study is a crucial tool that involve with the numerical analysis applied to a power system. A power flow study usually uses simplified notation such as a one-line diagram and per-unit system and focuses on various forms of AC power (i.e. voltages, voltage angles, real power and reactive power) [5]. Normal steady-state operation is how the power system is analyze. Exist a few number of software implementations of power flow studies. Load flow analysis is probably the most important of all network calculations since it concerns the network performance in its normal operating conditions. It is performed to enquire the magnitude and phase angle of the voltage at each bus and the real and reactive power flows in the system components. The important of this study is to attain compatibility for AC/DC systems with integrated DC links in the AC network by using the modification of the Newton-Raphson power flow analysis method.

The scope of this research is to analyze IEEE test system with the modified Newton-Raphson algorithm that will be develop and to solve the HVDC link power system load flow. This algorithm will be develop from the Newton-Raphson equation and some other equation from the DC link equations. The Jacobian equation for the AC power flow is altered to attain compatibility for systems with integrated DC link(s) in the AC network. Treated as voltage dependent PQ-buses are the converters. This grant the DC variables to be included in the power flow equations. Both the AC network and the DC link will be comprise by the new residual vector and Jacobian matrix [6].

Panosyan and Oswald presented the model of a two-terminal HVDC link and its integration into the Newton-Raphson method for the load flow analysis taking into consideration the control strategies of the HVDC converter stations. It is suggested that the simplest way of integrating a dc link into the ac load flow is by representing it by constant active and reactive power injections at the two terminal buses in the ac systems. Thus the two terminal ac/dc buses are delineate as a PQ-bus with a constant voltage independent active and reactive power [8].

Mobarak presented the well-known Newton-Raphson method for the load flow analysis of system consisting of HVDC link. The original NR method is modified to attain compatibility for AC/DC systems with integrated DC links in the AC network. The altered Jacobian equation includes the DC real and reactive power at the AC/DC buses and the dependency on the AC system variables [9].

Marsafawy and Mathur proposed a new method for the load-flow calculations of, integrated AC/DC systems. They proposed use of fast decoupled load flow method, which handles all AC/DC equations simultaneously, and fully exploits the sparsity techniques. They have shown application of the technique on two systems. The systems are one with a point to-point DC transmission and the other with a 3-terminal mesh HVDC sub-system. It was a fast technique for load-flow studies of an integrated AC/DC system [10].

MATLAB: MATLAB®is a high-level language and interactive environment for numerical computation, visualization, and programming. Using MATLAB, data can be analyze, develop algorithms, and create models and applications. The language, tools, and built-in math functions enable us to explore multiple approaches and reach a solution faster than with spreadsheets or traditional programming languages.

Separating the real and imaginary parts;

Expanding equation above in Taylor’s series 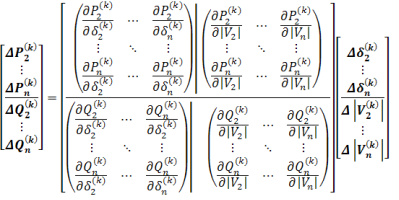 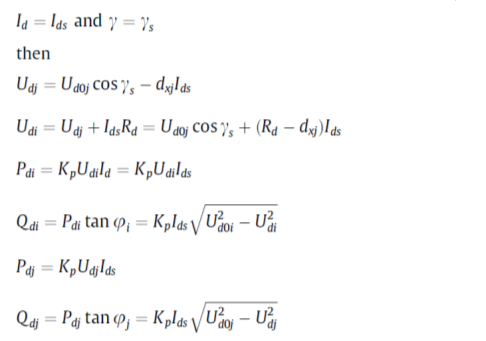 If we assume the rectifier maintains constant current (CC), the inverter operates with constant voltage (CV), maintaining adequate commutation margin under normal operation. That is: 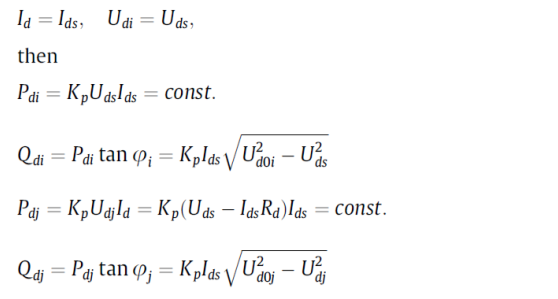 In a nutshell, the objective of this study will be achieved after all the research have been done. The Newton-Raphson method will be study and will be applied in the load flow analysis. Then, the Newton-Raphson method will be modified and applied in the AC/DC systems with the integrated DC links in the AC network to achieve it compatibility. The research will able to make the calculation for the AC/DC systems with integrated DC links in the AC network become easy. A new method to include dc systems in power flow calculations will be proposed. The method is more efficient than previous methods and more importantly, the method is easy to implement and developments of ac power flow solution techniques can be combined with the other method.