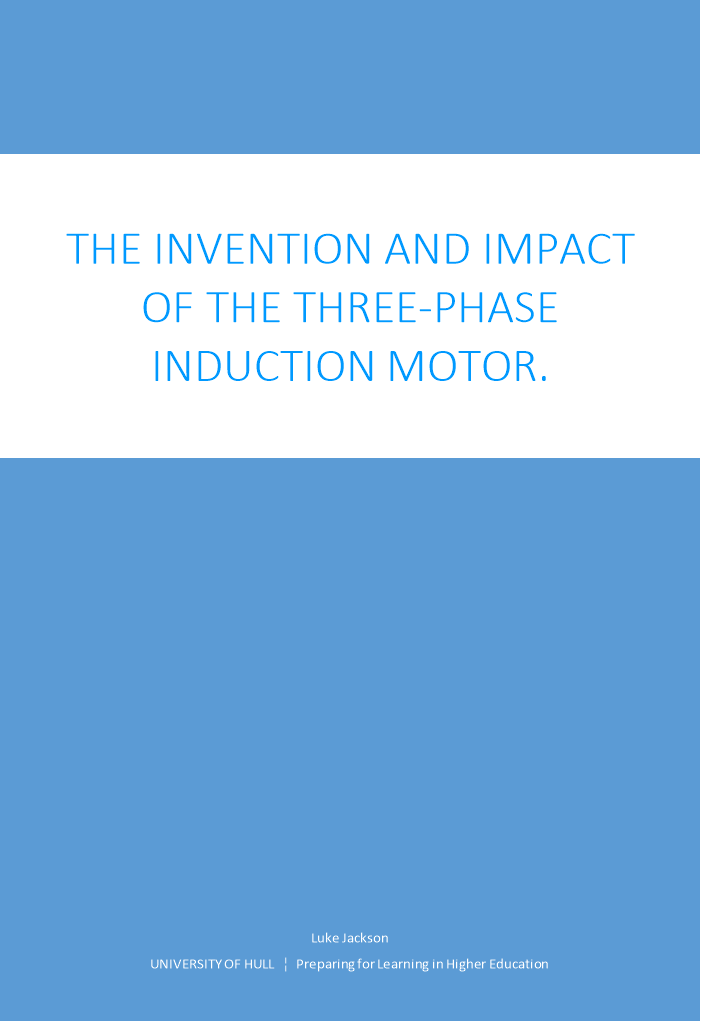 The main purpose of this essay is to convey a realisation to the reader of how the induction motor sped up the wheels of progress and sparked the second industrial revolution by effectively improving the efficiency of electrical power generation, creating the possibility of long distance electrical distribution.

The light that is illuminating the room you are in while reading this most likely powered by a generator influenced by Nikola Tesla’s design of the three phase induction motor. Any mechanical gadget or machine such as a washing machine, vacuum cleaner or toothbrush, are all powered using a three phase rotating magnetic force based on Tesla’s basic principle.

Nikola Tesla was a 19th century inventor which thought up the idea for the use of a rotating magnetic field in 1882 and finally invented the induction motor in 1887 and got it patented by 1888.Â  Development of the three-phase induction motor began in 1891 by a company named The General Electric Company, who Tesla sold his patent to, and achieved its first practical induction motor in 1892. A year after this the GE company developed a line of polyphaser 60Hz induction motors for mass commercial sale.

Once in the 21th century, power generation is widely demanded and supplied throughout the globe. The price of power has hugely reduced in the past 100 years as it is so easy to generate it with this simple design. As it been around for a century now it is familiar to people in the electrical industry and has fewer parts as opposed to other motors making it an easy installation.

Impact of the Induction Motor at Time of its Invention

When the first induction motor was invented and introduced to the public, there was what was called a ‘War of the Currents’ which was birthed from the objective of electrical power transmission across the country and illuminating the nation. In 1878 inventor Thomas Edison noticed a market for bringing electric light directly into a person’s home or business. These direct current systems would be sold to cities across America. Edison essentially controlled all technical development and from that made it a standard for lighting.

Direct current (DC) worked well with Edison’s incandescent lamps, which were the main supplying loads of the system. DC could be stored in batteries, so generator power could be backed up and run smoothly even if there was a power cuts. Edison also invented a meter so customers could be charge for their energy consumption, but the meter would only work with his DC system.

The main disadvantage of a DC system is that it ran on 110 volts starting from its generation right until it reaches its destination. This meant that it would have a very short transmission range as the DC current could not be transformed to lower or higher voltages, losing its efficiency the longer the length. To reduce the cost of thicker copper cables for generating and transmitting higher voltages, generating plants had to be placed in between busy cities and could only supply a home or a business less than a mile away.

Tesla thought he had the solution to the Edison problems with his use of alternating current (AC) power. Generated using his induction motor, AC current alternates the direction of current a certain number of times a second (which is called the frequency of the current, measured in hertz Hz) which could easily change voltages with the use of a transformer. High voltage meant the current could travel great distances with minimal losses, then be ‘stepped down’ to a lower manageable voltage at the consumer.

Around this time another American inventor and entrepreneur George Westinghouse, who began in the electric lighting business using a DC system, soon became aware of the new European transformer based AC systems. He understood that using this system would be possible for a greater economy of scale as a transformer could supply a high voltage to applications that needed that type of voltage such as arc lighting. Any other applications which required a lower voltage could be achieved as well. Westinghouse recognised that this system could easily compete with Edison’s DC system which was in place at the time.

Impact of the Induction Motor in Modern Times

Tesla explained that these three alternating currents would have toi ve out of phase with each other by 120 degrees in order to create rotating magnetic field, but there is nothing to indicate that he understood in 1882 the signifigannce of having the currents out of phase. “My idea” Tesla explained, “was that the more wires I used the more perfect would be the action of the motor.”