Within manufacturing, process control is fundamental in order to routinely produce high quality parts. Process control is an engineering discipline which can be defined as maintaining the output of a specific process within a desired range. [1]

Temperature regulation is omnipresent in the world we live, for example, every living creature has autonomous bodily functions to regulate temperature. Artificially, central heating systems work in the same way, the user sets the desired temperature and the system detects the current state and makes adjustments to the temperature.

A resistance temperature detector (hereby referred to as an RTD) is a temperature sensor which exploits the basic principles of science to play a key role in process control.

An RTD is a temperature sensor which contains a resistive element. As the elements’ temperature changes so does its value of electrical resistance. It is this predictable property which enables us to control the temperature of a chosen substance or environment. RTDs are well known for their accuracy, stability and repeatability. The electrical resistance related to the variation of temperature is given as the Callendar-Van Dusen equation:

Within a basic RTD the change in resistance of the element is small in comparison to the change in temperature. Therefore a bridge circuit is used to allow the measuring of the voltage drop across the resistor when applying a small constant current. 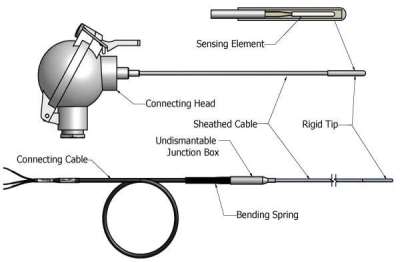 Once the sensing element (see figure 1, below) has been placed where the temperature needs to be monitored or controlled, it will reach thermal equilibrium with its environment. At that temperature, the element will exhibit a certain value of resistance, this resistance is calculated and converted into a temperature which is fed back to the end user. Any change to the temperature of the environment will be represented by the change in electrical resistance of the RTD.

There are five different construction variants of RTD elements, these include:

The most common materials used as RTD elements are platinum, nickel, copper, balco and tungsten. Platinum is the most popular due to it being very repeatable and quite sensitive, balco and tungsten are very rarely used. Platinum, copper and nickel have temperature ranges of 650Â°C, 300Â°C and 120Â°C respectively and exhibit strong linear properties over a wide range of temperature. (see figure 2, below). 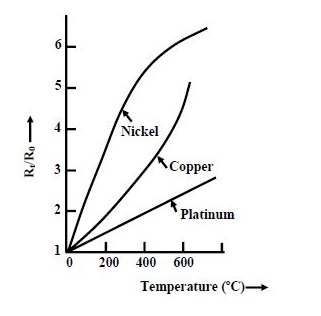 The most common type of RTD used within industry is the PT100. This RTD has an element of pure platinum and has an electrical resistance of 100â„¦ at 0Â°C, hence the name PT100. The resistance of a typical PT100 RTD changes at 0.39â„¦ per 1Â°C. 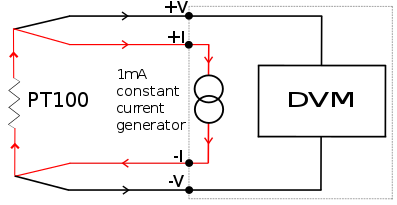 The accuracy of the measurement of resistance is increased by using the four-wire configuration. Voltage drop in the measuring leads is eliminated using four-terminal sensing.

A PT100 RTD has a long term stability of around Â±0.2% of the 0% value over a 1000 hour (one year span). This test was conducted in special ovens with air heated to 800Â°C. This property is arguably the greatest property of an RTD.

Speed of response is measured by submerging the PT100 sensor in water or air moving at 1 m/s with a 63.2% step change (see figure x). Thermo-electra show that the response time for one of their PT100 sensors are as follows [5]: 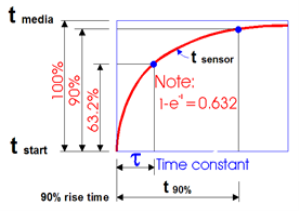 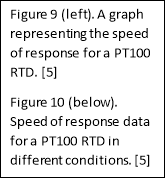