1.1) A detailed description of the project “Human Dependent Lightning System” is presented in this career episode. I started this project with a team of three engineers including myself under the guidance of our tutor and head of department, during the initial months of 7th semester, Bachelor of Engineering (Electronics and Communication). This project was implemented as part of my academic curriculum “Project – 1” and it took us three months (July 2012 to September 2012) from inception, testing to implementation of the project. I was appointment as a group leader for this project by our tutor.

1.3) In Human Dependent Lighting System, we used PIR Sensor which is used to receive the infrared rays that are emitted by human body and Light Dependent Resistor(LDR) to measure the intensity of ambient light. On the output side, we used AC mains supply with loads, such as light connected with relays. These relays are operated based on the output of the controller with specific delays to provide safety to the loads and also to provide intelligent lighting system.

1.4) The system turns ON the required number of lights depending upon the surrounding ambient condition; hence switching OFF the unnecessary lights. The system maintains the required luminous intensity incorporating light received from the surrounding, thus using electricity smartly. Furthermore, we have used PIC12F675 controller equipped with a RISC architecture with inbuilt ADC and MPLAB IDE Version 8.63 software which is used for programming the controller. We have also used a display unit to show intensity levels and number of loads which are switched on.

The main objectives of the project are as follows:

1.7) My Roles and Responsibilities as a group leader (Engineer 1) included:

1.8) After the decision to build a prototype for Human Dependent Lighting System was made, the first step I took as a group leader was to select a microcontroller which could act as a brain for the unit and was also programmable. Post which, an exhaustive research referring to different data sheets of microcontrollers was carried out, which enabled me to come up with two appropriate microcontrollers for the project – PIC12F629 and PIC12F675. Both the microcontrollers are PIC12 series microchips having same configuration except one attribute. PIC12F629 lacks Analog to Digital convertor, whereas PIC12F675 has inbuilt 10 bit 4 channels A/D converter which met one of the requirements of the project. Therefore, I selected PIC12F675 microcontroller, an 8-bit RISC architecture based controller used for detecting motion via PIR sensor. It was marked as the IN port for the micro controller. Whenever PIR (Passive Infrared Sensor) Sensor detects a motion due to the human presence or any movement in the room, it acts as an input which makes the lights turn ON.

1.9) One more reason to select PIC12F629 microcontroller, was to connect TRIMPOT to ADC (Analog to Digital converter) to determine the ON time for the system if there is no motion detected. For instance, if Trim POT is set for 10 seconds ON period and if no motion is detected inside the room where system is installed, then system will switch OFF the lights after 10 seconds. We used solar panels to charge the battery during the day time and during the night the system will use the battery to control the lighting systems. We also connected White LED/Relay Driver to OUT port of the PIC controller in order to control the driver or LED based on two inputs conditions: one based on PIR sensors and other from the Trim POT for ON time control. This driver circuit is based on Transistors.

Furthermore, we used LT1086 voltage regulator in order to achieve +5V regulated supply for the system. The LT1086 is accessible in a 3-pin TO-220 bundle and a space-sparing surface mountable 3-pin DD bundle. Therefore, I went with this module, which is very handy and user friendly 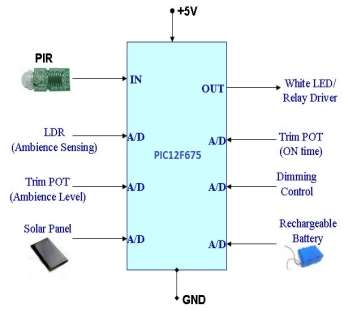 I used MPLAB IDE Version 8.63 software to program the microcontroller which provides a development environment to perform and program various functions. This software offers memory mapping function to visualize each register. Errors were checked on troubleshooting and debugging the programs by building targets. If it was error free, various simulation ports of the controller were provided to check outputs. 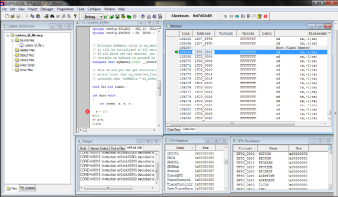 I used this software since I wanted to achieve the following features:

Designing of the circuit was an arduous task for us. We completed an exhaustive training program in order to design the circuit proficiently and keeping the IEEE code of conduct guidelines in our mind. The first task was to develop the circuit diagram using EasyEDA software. After following the necessary guidelines to design a circuit, we acquired the skills such as soldering using flux, component placement, placement of ground and power plane, avoid overlapping of analog and digital planes. Furthermore, we took safety measures such as wearing perfect gear for soldering or while connecting the circuit with external power supply. We also read instructions and manuals for understanding implementation of electric components in the safest way. The following picture depicts the basic hardware developed by us for human dependent lighting system. 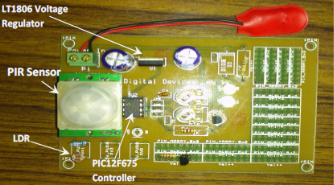 1.13) After building the prototype, we completed our project by testing and maintaining the documentation. The project was submitted with a presentation along with the working prototype and reports which was assessed by our tutor and head of the department. The overall project journey was a great experience in terms of learning new skill every day which was a boost to my technical and leadership skills. I faced many ups and downs especially during the training but working with a team was an added advantage for me to divide the load/task in parts and made the implementation of the project successful within the stipulated time. This project has lots of potential and it can be applied to commercial and domestic use.