Assignment 3 of Pattern recognition is on HMMs. It should contain a detailed report on HMMs. The topics covered should include:

1. An introduction to HMM and its uses.

1. Problems of HMM, their explanation and relation to prior, posterior, and evidence.

2. Solution to the problems of HMM and their algorithms.

An Introduction to HMM and it’s Uses

A Hidden Markov Model HMM is a stochastic model which has a series of observable variable X which is generated by hidden state Y. In an indirect way HMM consist of hidden states which has output that is comprised of a set of observations. Simple Markov Model models the states are directly observables means the states are directly output while in HMM the states are hidden and different form the observables or output. HMM is very reliable model for probabilistic estimation. HMM have applications in pattern recognitions such as speech recognition, gesture and hand writing recognition, computational Bioinformatics, etc.

Suppose we are considering three trails of a coin toss experiment and the person who is observing only know the results of the experiment when another person announces the result who is hidden in a closed room from the person noting the results. The result of this coin experiment can be any set of heads and tails e.g. THT, HHH, THH, TTT, THT etc. The person observing the results can get any sequence of heads and tails, and it is not possible to predict any specific sequence that will occur. The Observation Set is completely unpredictable and random.

The sequence of number of heads or tails is known to be the observables and the number of trail is said to be the state of the HMM.

HMM is composed of: 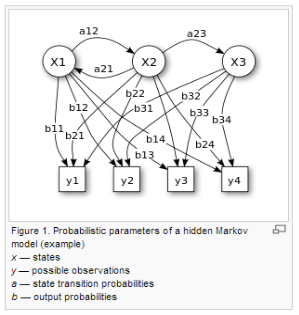 Problems of HMM and their explanations

Suppose we have an HMM, complete with transition probabilities aij and output probabilities bjk. We need to determine the probability that a particular sequence of observables states OT was generated by that model.

Relation of HMM to Prior, Posterior and evidence

Solution to the problems of HMM and their algorithms

From the above mentioned discussion, we know that there are three different of problems in HMM. In this section we will briefly know how these problems are solved

The forward and backward steps are combined by the Forward-Backward algorithm to estimate the probability of each state for a specific time t, and repeating these steps for each t can result in the sequence having the most likely probability. This algorithm doesn’t guarantee that the sequence is valid sequence because it considers every individual step.

The forward algorithm has the following three steps:

Viterbi algorithm is used to find the most likely hidden states, resulting in a sequence of observed events. The relationship between observations and states can be inferred from the given image.

In second step the process is iterated for every step

In third step the iteration ends

In Fourth step we track the best path

Assume we collect eggs from chicken every day. The chicken had lay eggs or not depends upon unknown factors. For simplicity assume that there are only 2 states (S1 and S2) that determine that the chicken had lay eggs. Initially we don’t know about the state, transition and probability that the chicken will lay egg given specific state. To find initial probabilities, suppose all the sequences starting with S1 and find the maximum probability and then repeat the same procedure for S2. Repeat these steps until the resulting probabilities converge. Mathematically it can be