­­­­­­­­­­­­­­­Kilovoltage unit was one of the first external beam therapy used in a radiotherapy department. Despite its popularity then, departments opt into using a megavoltage machine due to its versatility in treatment. The uses kilovoltage therapy, especially superficial x-ray therapy remains widely important in treating certain cancer patients. Gulmay Medical Ltd is one of the world’s leading manufacturers in Kilovoltage x-ray therapy equipment’s. One of its latest accomplishments was building Gulmay D3300, a combined superficial and orthovoltage unit, beam energy ranging from 20-400kv. In this essay, I will be describing the physical aspects of a Gulmay generator and x-ray tube used within this machine, their role in the production of x-ray as well as its cooling mechanism. I will be discussing the uses of having such combined units, the benefits and the complications it will cause to both the NHS, departments and the patients as well as the advantages and disadvantages of using cut out lead shielding within a treatment.

The generator aims to magnify the initial input voltage to a substantial amount, enough to potentiate x-rays with a certain Half Value layer (Flinton, 2009). The CP225 generator which can be attached to the D3300, is powered by 3200W-4500w and has the capacity to generate voltage from 220V to 20-225KV (Gulmay Medical Ltd, 2014). Connected to the generator is the X-ray tube, via cables joined to both the anode and the cathode (figure one). The tubes are in a unipolar arrangement whereby the negative potential from the generator is fed into the cathode and the anode is maintained at a ground potential (Earth). (Flinton, 2009)

Figure one: A map of the equipment’s inside a Gulmay Superficial x-ray therapy machine (Gulmay Medical Ltd, 2014). 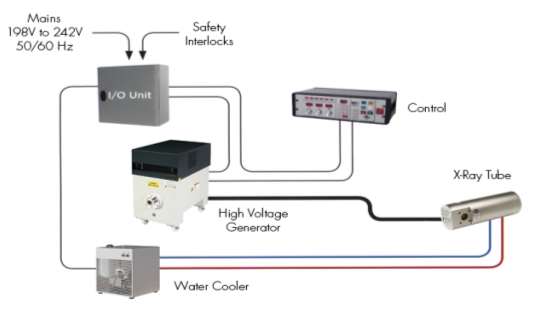 The CP225 generator is able to attach to a high power x-ray tube, 225/11, which can take up to 225V, ideally suited for its generator (Gulmay Medical Ltd., 2014). The tube is covered in a metal ceramic material and compromises on a ceiling support or on a floor stand. The mounting requires a manual force to move in the three axes -transverse, longitudinal and vertical, as well as rotational and tilt movement of the tube (Flinton, 2009).

The cathode assembly, within the tube is held by a ceramic insulator aimed to insulate it from the metal housing of the tube and consists of a single tungsten filament. Compared to the cathode, the anode is structurally dissimilar, as shown in figure two. Made out of copper, the anode is either wielded onto the metal tube envelope or a ceramic insulator is sandwiched between them. The anode has extensions known as an integral hood and located on the side of the hood is a desired x-ray exit known as a beryllium window, which has a filtration of 0.8mm Be. The tube is enclosed within a vacuum to ensure the electrons do not interact with other particles, slowing down the production of pure x-rays (Flinton, 2009). 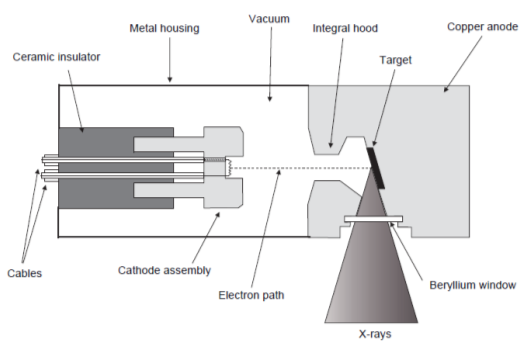 As the heat builds up within the tube, it is removed from the target through conduction of the Copper anode acting as a heat sink due to its large size. To ensure efficient and rapid heat conduction, a cooling system is attached to the tube which ensures a high temperature difference away from the target (Figure one). Because the x-ray tube is unipolar, it is safe to ensure the flowing cooling medium within the cooling system is water, (Gulmay Medical Ltd., 2014) and therefore cost effective to implement. Since water is a conductor of heat, it is constantly replaced by new cool water once it has heated up.

When the electrical current passes through from the generator to the tube via the cable, it reaches the cathode assembly heating up the tungsten filament. The filament then emits electrons in a process known as thermionic emission. The filament develops into a focussing cup containing a static negative charge stopping the electrons from scattering and to coerce them together to ensure the electrons aim at a small sectional area of the anode (Flinton, 2009).

The cathode becomes highly negatively polarised that the grouped electrons are fired and strike a target within the anode, made from tungsten. The electrons begin to decelerate and release energy creating x-rays and heat (Xstrahl, 2014). The integral hood absorbs any unwanted electrons and prevents secondary x-rays from forming (extra focal radiation), whilst the beryllium window allows the primary x-rays to leave the tube (Flinton, 2009).

Evan et al. (2001) states that by having a combined superficial and orthovoltage unit rather than two units, it will save half the money to facilitate separate shielded treatment rooms. There will also be a reduction in capital costs, spares, precautionary maintenance and quality control resources. However, by having a combined unit, the beam characteristics should be compromised as they are all necessitated by the use of a single X-ray tube to generate a beam as well as if the machine was to break down, the department may be at a loss of all kilovoltage treatment capacity.

By having a low energy treatment, it is simple to treat superficial lesions. The low energy components of Gulmay d3300 allow many skin lesions to be treated up to 5mm deep, and by having a medium energy component it will allow treatments of skin lesions up to 2cm deep to be treated (Klevenhagen and Thwaites , 1993, and Glees, J.P and Wolstenholme, V., 2006). The aim of superficial x-ray therapy is to apply the dose superficially, maintaining the lack of skin sparing in order for the treatment to be successful. The fall in dose with depth is slower for x-rays than electron, thus the dose is below the treatment site is higher, being most effective in superficial treatment. Majority of the internal anatomical sites are not significantly affected by the radiation, The drawbacks to this is if treating an area neighbouring structures in which contain poor blood supply and are at risk of radiation damage such as cartilages, then it would be beneficial to use an electron beam due to the rapid fall-off (Griffiths, 1994).

When using an orthovoltage machine, the aim is to treat deep seated tumours at a close depth to the skin by applying a great amount of dose to the surface of the patient before it reaches the tumour site. The lack of skin sparing can result into skin damage caused on a patient (Griffiths, 1994).

Patients can suffer acute reactions and late reactions. When patients begin their treatment, the acute reaction will follow in stages. During the first treatment, the patient may feel warmth in the area being treated; this is followed by the reddening of the skin, known as erythema, which can appear from a dose level of 1GY. As the dose escalates, the treated area will become itchy, sunburn like red, and is prone to injuries. Around 14 days, the hairs in the treated areas may fall out in a process known as epilation. By the time patients get to this stage finish their treatment course. This is due to the lengthy fractionations of treatment; the degree of reactions becomes less severe. Once the treatment stops, skin will begin to heal and becomes tanned. However, patients that go through a long treatment will experience reactions at a greater degree. The next stage in the skin reaction is dry desquamation, the peeling of the skin in dry flakes. Furthering this treatment, the skin then becomes dark red or purplish and fluid will start to build up underneath causing oedema, which is tender to touch. It is broken down and blisters start to form, the fluid begins to seep out of the skin. Patients treatment is then at a halt due to the severity of the reaction. Within an orthovoltage machine, by giving a high dose, the stem cell pool within the skin will be destroyed and area of ulceration will remain lasting within the treated area of the patient (Lochhead, 1983, p. 107-108).

Late reactions are dependent on the beam energy and the dosage level. ‘The beam energy determines the part of the skin that is affected by the radiation.’(Lochhead, 1983, p. 107-108). By using low beam energy of up to 300kv, the germinal or basal layer of the skin demonstrates the most change to the skin. Activity is lost within the cells and the skin becomes thin. Once the skin becomes damaged it will take a long time to heal. Places where the hair has epilated may become permanent due to the destruction of the hair follicles. Sweat glands are destroyed and superficial blood vessels deteriorate. Other blood vessels nearby would enlarge to compensate the damaged blood vessels, and patients may begin to form Telangiectasis, a condition whereby the patients skin becomes pale and the red blood vessels enlarge. An injury to the patient may cause a necrosis of the skin.

According to Griffiths et al. (1994, p.35) it was thought that by creating multifeilds across the tumour, patients’ skin reactions may subside. However this had caused a high integral dose on the patient as well as sore skin. Now it is often more advantageous to have a megavoltage machine treating these tumours due to the skin sparing affect it provides for the patient and the orthovoltage is progressing to become outdated.

One of the main forms of shielding in a superficial and orthovoltage machine is the use of a lead cut out. A lead cut out is made to define the treatment area as well as shielding normal healthy tissue from the radiation beam. This is used in conjunction with an applicator attached to the machine collimator. It also provides direction and localisation of the beam. For the face and areas close to the eye a specific lead mask is produced, to avoid radiation to critical structures nearby (Mills et al., 2012). The study of Medvedevas et al (2001) concludes that the application of lead shielding attenuates the dose received to normal tissue significantly. However, according to Flinton (2009) the drawbacks in using lead shielding is the elevation in dose on the beam side of the lead caused by the interactions that arise in the lead shielding behind the target volume, as a result from the high backscatter component at these energies. The build up to full back scatter is most rapid in small fields, more so in low energy beams. For small fields such as the eye, this is a problem. Mills et al (2012). At the point when treating the eye, shielding made from either tungsten or lead is inserted to protect the lens. ‘The problem encountered with eye shields is the contribution from scatter which reaches into the region under the shield from the surrounding field.’(Mills et al., 2012, p. 125). A way to resolve this was by applying tissue equivalent material, i.e. wax, around the shield to absorb the scatter avoiding this problem.