Generation of Electricity in a Nuclear Power Plant

Large amounts of electricity can be generated from the fission reactions in a standard PWR nuclear power plant, which enriched uranium as fuel. This process has high output but has many laws a restrictions that have to be abided in order for the plant to be safe and economically feasible. It also has some environmental implications that have to be considered due to the nature of its waste products.

Nuclear energy currently generates about 11% of the world’s electricity and this number is expected to grow as developing countries try to reduce their dependence on oil and gas. This means that more and more nuclear power plants have to built in order to cope with the energy demands of various countries worldwide. Thus, engineers from all walks of life have to work together and design safe and efficient power plants. However, this task is extremely difficult due to the health and safety risks involved.

The aim of this report is to research the generation of electricity in a nuclear power plant. The objectives necessary to meet this aim are:

The main raw material used in a nuclear power plant is uranium. Uranium has two main isotopes which are U-235 and U-238. U-235 described as fissile, meaning it will undergo nuclear fission when impacted with a thermal neutron, this process releases a large amount of heat, which is used to generate steam. U-238 is described as fertile, meaning it can form an active products which can then undergo further fission into smaller products. (C. R. Hill, 1999)

The natural abundancy of U-235 is about 0.7%, which is too low to sustain large enough amounts of chain reaction to generate heat in a nuclear reactor. Therefore the Uranium has to enriched until it contains approximately 4% U-235 before it is used as fuel in a standard Pressurized Water Reactor (PWR) of the plant. Mined Uranium exists as Uranium oxide (UOX) which has to be processed rigorously and enriched before it can be used. The product of this process are enriched Uranium pellets which stored in a fuel rod made of zirconium. (Harding, 2016)

In a nuclear reactor, the main reaction is nuclear fission, the splitting of a heavy unstable nucleus into two smaller daughter nuclei. This reaction releases heat energy as the nucleus is split. For the nuclear fission of Uranium, U-235 absorbs a thermal neutron and becomes excited U-236. This then splits into Krypton and Barium while releasing three thermal neutrons and gamma rays. The thermal neutrons produced further impact other U-235 nuclei, resulting in a chain reaction. (L.Murray, 2001)

Another reaction that occurs is when U-238 absorbs a neutron. When that happens, an active product, Plutonium-239, is formed. It then undergoes alpha decay to form U-235 and an alpha particle. Thus allowing more chain reactions to occur in the nuclear reactor. These are examples of the numerous reactions that happen in the nuclear reactor, there are many more actinides and fission products formed as the fuel rod becomes depleted. (Nuclear Chemistry, 2018) 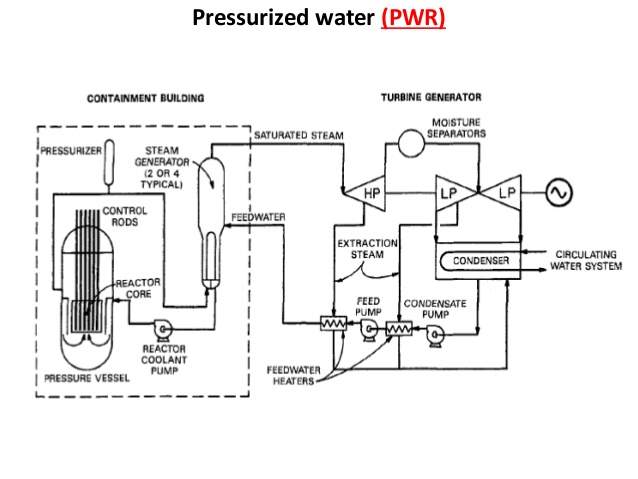 The process flow diagram above shows the components and piping in a PWR nuclear power plant. It can be seen that there are two separate flow systems: reactor coolant flow and water/steam flow.

In the reactant cooler flow system, the fluid is most commonly pressurized water as it acts as a good moderator and has a high specific heat capacity. The water is pumped through the reactor and absorbs the heat generated from the fission reactions. Then it transfers this heat to the other system.

The most common nuclear reactor in power plants is the Pressurized Water Reactor. It gets this name from its use of pressurized water as a moderator, fluid with the ability to slow down thermal neutrons. The water is pressurized to 150 bar to prevent the water from evaporating at operating temperatures of around 300°C. This ensures a high temperature gradient between the coolant system and the water/steam system. (C. R. Hill, 1999) The parameters of the reactor are as shown below: 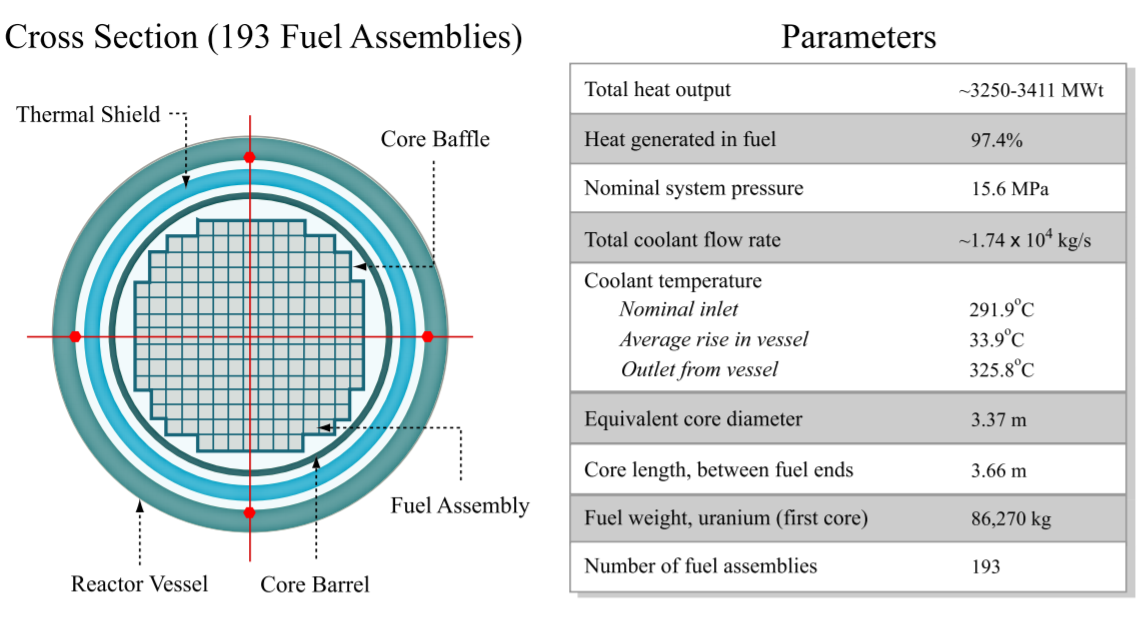 From the diagram above, it can be seen that the heat output is extremely high, leading to the requirement of a heat shield. Besides that, the mass of the fuel is also very high. This is because the mass of the fuel has to be equal or higher than the critical mass of Uranium in order to have self-sustaining chain reactions. (L.Murray, 2001)

To control the extent of the fission reaction and to prevent the reactor from going supercritical, control rods are installed as part of the reactor. These rods are composed of boron, silver, indium and cadmium as these elements are capable of absorbing many neutrons without undergoing fission themselves. (Buongiorno, 2010)

As the heat from the 300°C water is transferred the steam/water system, the water evaporates and high pressure steam is formed. The steam is then fed to the turbine generator which converts kinetic energy into electrical energy. After that, the temperature and pressure of the steam decreases and is condensed in the condenser into water which is then pumped into the feed and the cycle repeats.

The turbine generator has two chambers where steam can enter. High pressure steam enters the high pressure chamber and spins the turbine blades as it flows through. The steam travels through multiple layers of turbine blades to maximize the energy transferred. After the steam exits the chamber, it has a lower pressure and temperature, therefore it is sent to the reheater before entering the low pressure chamber. This ensures the steam does not condense in the chamber, reducing the efficiency of the generator. In this chamber, the process is identical to the previous chamber but with even more turbine blades. All the rotational energy generated is used to spin a coil inside a magnetic field, at approximately 3000 rpm, to generate electricity. The faster the coil spins and the more it spins the more electricity is generated, thus the requirement for the two chambers and many turbine blades. The amount of energy generated by is method is an astonishing 14TWh in a single day. (How does a steam turbine work, 2012)

Water is essential in nuclear power plants due to its special physical properties. Therefore, these plants are usually built near a large body of water, such as an underground reservoir, a lake or the sea. The water may be used for 2 purposes: to cool the reactor and to generate steam. Tens of thousands of gallons have to be drawn per MWh of electricity produced. Thus, a large cooling tower is needed to reduce the temperature of the water before returning it to lakes or seas, as water temperature can severely affect wildlife. (Nuclear Power and Water, 2011)

The product formed in the nuclear reactors is radioactive waste, it is comprised of different actinides and fission products as described in 2.2. Many of these products such as Plutonium-239 are highly radioactive and have half lives of millions of years, therefore they cannot be disposed of using normal methods. First, they have to be processed to remove anything that can be recycled or reused for other purposes. For example, Iodine-123, a low-level waste product, can be extracted from the depleted fuel rods and be used in medicine as a tracer or for radiotherapy. High level waste also has its uses, such as Pu-239 can be used in a Mixed Oxide (MOX) nuclear reactor, generating even more electricity. (C. R. Hill, 1999)

After reprocessing, the remaining material is still highly radioactive. The preferred way, by many countries, of dealing with this waste product is to store it thousands of meters below the ground. Many measures are taken to prevent the radiation and waste from escaping containment. The containers are designed to last for thousands of years and to prevent water from contacting the material as it is a risk of contamination. (L.Murray, 2001)

After World War II, in the United States, Congress passed the Atomic Energy Act of 1946, which was later amended in 1954. The purpose of this act is to ensure nuclear energy was used for the betterment of mankind and to promote world peace. This law still stands as of today and is enforced by the Nuclear Regulatory Commission. Currently, The International Atomic Energy Agency oversees the development of nuclear technology in developing countries while keeping track of nuclear inventories under The Energy Policy Act of 1992. (L.Murray, 2001)

The main drive in developing nuclear reactor is to generate vast amounts of electricity in the smallest space possible. However, this energy should be generated safely with no risk of the core going supercritical or having a meltdown. For this reason, many safety features have to be installed in a plant to prevent the escape of radiation into the surrounding environment. For example, the nuclear reactor is inside a containment building with thick concrete walls to prevent leakage; the reactor core has many control rods to shutdown the core rapidly; a cooling system is available to reduce the heat of the reactor to safe levels. These safety systems are designed and put in place to ensure the safety of the staff working in the plant as well as people living around it. As a result of which, developing a nuclear power plant is extremely costly. (L.Murray, 2001)

A PWR nuclear power plant, which uses enriched Uranium as fuel, is capable of generating around 14TWh of electricity in a day. It has excellent output but is very expensive to build and has some environmental impact due to the waste product and the used water. This power plant is safe as long as the laws are adhered to and safety system are fully functional.