Abstract– Now day’s applications should be require various types of images and pictures as sources of information for interpretation and analysis. Whenever an image is changed from one to another form such as, digitizing, scanning, transmitting and storing, some of the degradation always occurs at the output end. Hence, the output image has to go in a process called image enhancement which consists of a collection of techniques that need to improve the quality of an image. Image enhancement is basically improving image and its interpretation and perception of the information in digital images and providing good input for different other automated image processing techniques. The fuzzy set theory is always uncertainties (like it comes from the information available from situation such as darkness may result from incomplete, imprecise, and not fully reliable). The fuzzy logic gives a mathematical model for the representation and processing of good knowledge. The concept is depends upon if-then rules in approximation of the variables likes threshold point. Also the Uncertainties within image processing tasks often due to vagueness and ambiguity. A fuzzy technique works as to manage these problems effectively.

Whenever an image is changed from one to another form such as, digitizing, scanning, transmitting and storing, some degradation is always occurs at the output stage. Hence, the output image has to go in a process called image enhancement. Image enhancement consists of a collection of techniques that need to improve the overall quality of an image. Fuzzy image processing is the approaches that understand, represent and process the images and their pixels with its values as fuzzy sets. The representation and processing is depending upon the selected fuzzy techniques and the problem to be solved. The idea of fuzzy sets is very simple and natural. For instance, if someone want to define a set of gray levels, one has to define a threshold for gray level from 0 to 100. Here 0 to 100 are element of this fuzzy set; the others do not belong to that set. The basis logic behind fuzzy technique is the basis for human communication. This observation depends upon many of the other statements about fuzzy logic. As fuzzy logic is built on the logics of qualitative description used in everyday language, fuzzy logic is very easy to use. A filtering system needs to be capable of reasoning with values and uncertain information; this suggests the use of fuzzy logic.

Fuzzy image processing is the approaches that understand, represent and process the digital images and their segments and also features as fuzzy sets. The representation of it and processing is always depending on the selected fuzzy techniques and on the problem which need to be solved [9]. Below a list of general observations is defined about fuzzy logic:

The mathematical concepts behind fuzzy logic reasoning are simple. Fuzzy logic is important approach without the far-reaching complexity.

Everything is indefinite if you look closely enough, but more than that, most things are indefinite. Fuzzy reasoning prepared this understanding into the process rather than just theory.

One can create a fuzzy logic system to compare any sets of input and output data. This process is very easy by some of the adaptive techniques such as Adaptive Neuro-Fuzzy Inference Systems, which is already available in Fuzzy Logic Toolbox.

In case of neural networks, it must need training data and generate the outputs. But fuzzy logic will explain you about the experience of people who already understand the whole systems.

Natural language, which people used on a daily basis, has been comes by thousands of years of human history to be efficient. Sentences that are written in ordinary language always represent a triumph of efficient communication [3]. 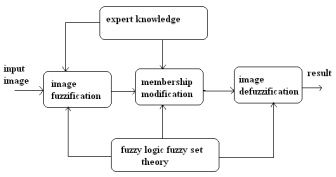 Fuzzy set theory is the extension of crisp set theory. It works on the concept of partial truth (between 0 & 1). Completely true is 1 and completely false is 0. It was introduced by Prof. Lotfi A. Zadeh in 1965 as a mean to model the vagueness and ambiguity in complex systems [3]. 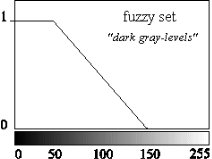 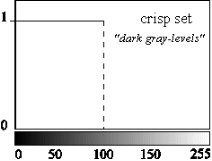 Figure 2. Representation of “dark gray-levels” with a fuzzy and crisp set.

An image I of size MxNand L gray levels can be considered as anarray of fuzzy singletons and out of which each are having a value of membership denoted its brightness relative to its brightness levels Iwith I=0 to L-1. For an image I, we can write in the notation of fuzzy sets:

Where g, is the intensity of (m, n)th pixel and Âµmn its membership value. The membership function characterizes a suitable property of image (e.g. edginess, darkness, textural property) and it can be defined globally for the whole image or locally. The main principles of fuzzy image enhancement is illustrated in Figure.

This process needs to change the values of the membership functions resulted from fuzzification process. In this algorithm, the shape of the membership function is set to triangular to characterize the hedges and value of the fuzzifier Î². The fuzzifier Î² is a linguistic hedge such that Î² = -0.75 + Î¼ 1.5, so that Î² has a range of 0.5 – 2. The modification is carried out to the membership values by a hedges operator. The operation is called dilatation if the hedge operator Î² is equal to 0.5 and it is called concentration if Î² is equal to 2. If A is a fuzzy set and it’s represented as a set of ordered pairs of element x and its membership value is defined as Î¼, then AÎ² is the modified version of A and is indicated by below equation

After the values of fuzzy membership function has been modified, the next step is to generate the new gray level values. This process uses the fuzzy histogram hyperbolization. And this is due to the nonlinearity of human brightness perception. This algorithm modifies the membership values of gray levels by a logarithmic function:

Where, Î¼mn (gmn) is the gray level in the fuzzy membership values, Î² is hedge operator, and g’mn is the new gray level values. 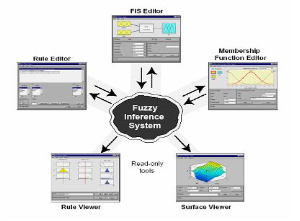 Fuzzy inference systems has been successfully applied in fields such as data classification, decision analysis, automatic control and computer vision. As fuzzy is multidisciplinary, it can be used in fuzzy inference systems such as fuzzy-rule-based systems, fuzzy associative memory, fuzzy expert systems, fuzzy modeling, and fuzzy logic controllers, and simply fuzzy systems.

Mamdani’s fuzzy inference method is the most commonly used fuzzy method. Mamdani’s method was the first control systems designed using fuzzy set theory. It was firstly proposed in 1975 by Ebrahim Mamdani [7] to control a steam engine and boiler combination by synthesizing a set of some linguistic control rules which can be obtained from experienced human operators. Mamdani’s model was based on Lotfi Sade’s 1973 on fuzzy algorithms or complex systems and decision processes [8].

One other approach to infrared image contrast enhancement using fuzzy logic is a Takagi-Sugeno fuzzy rule based system. Takagi-Sugeno rules have consequents which are numeric functions of the input values. This approach is used to enhance the contrast of a gray-scale digital image which proposes the following rules:

IF a pixel is dark, THEN make it darker

IF a pixel is gray, THEN make it mid-gray

IF a pixel is bright, THEN make it brighter

Membership functions in a fuzzy set map all the elements of a set into some real numbers in the range [0, 1]. When the value of membership is higher, the “truth” that the set element belongs to that particular member function is higher as vice versa.

The input membership functions for an image contrast enhancement system is shown in Figure 7. The set of all input image pixel values is mapped to 3 different linguistic terms: Dark, Gray & Bright. The values Î¼i(z) quantify the “degree of membership” of a particular input pixel intensity value to the each of the 3 member functions; denoted by the subscript (i). Thus, Î¼dark(z) assigns value from 0 to 1 and in between to how truly “dark” an input pixel intensity value (z) is. Same way, Î¼gray(z) and Î¼bright(z) characterize how truly Gray or Bright a pixel value z is. The Dark and Bright input membership functions can be implemented by using a sigmoid functions and the Gray input membership function can be implemented by the Gaussian function. The sigmoid function, also known as the logistic function that is continuous and non-linear. This can be defined mathematically as follows:

Where x is input and g(x) is gain. The Gaussian function is defined as below: 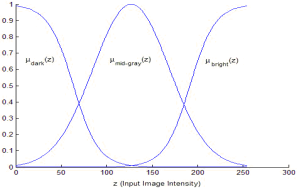 These are shown below:

In case of image processing, fuzzy logic is computationally intensive, as it requires the fuzzification, processing of all rules, implication, aggregation and the defuzzification on every pixel in the input digital image. Using a Takagi-Sugeno design which uses singleton output membership functions can reduce computational complexity Figure 9 is the block diagram of the process developed for the fuzzy logic technique implemented for this work.

Many researchers have applied the fuzzy set theory to develop new techniques for contrast improvement. A basic fuzzy algorithm for image enhancement, using a global threshold, has been briefly recalled. Let us consider a gray level digital image, represented by the gray level values of the pixels with the range [0;1] and Let l be any gray level of a pixel in this digital image, l [0;1] .

Contrast improvement is a basic point processing operation which mainly used to maximize the dynamic range of the image. A higher contrast in an image can be achieved by darkening the gray level in the lower luminance range and brightening the ones in the upper luminance range. This processing generally implies the use of a non-linear function; Form of such a function could be the one presented in Figure 10. Mathematical expression of such a nonlinear function, Int (l) is as below:

The expression represents operator in the fuzzy set theory, namely the intensification (INT) operator. When it is applied on digital images, it has the effect of contrast enhancement.

Let us denote the resulting gray levels in the contrast enhanced image by g given by:

Thus, the contrast enhanced image have gray levels of its pixels given by the nonlinear point-wise transformation in Figure 10, applied to the original gray level image.

The following are the steps which are carried out for the implementation to get the output:

To find Mid point of image

Four different fuzzy approaches has been implemented to enhancement the high voltage images. Compared to the basic approaches, one can notice that fuzzy methods offer a powerful mathematical model for developing new enhancement algorithms. The global fuzzy approaches not gives satisfactory results. But here a locally adaptive procedure for fuzzy enhancement has been proposed. The contrast enhancement of high voltage images is also not satisfactory sometimes. The reason behind that is the physics of EPIDs which produces images with poor dynamics qualities and that is why sometimes there is no information in MVI to be improved. The fuzzy logic algorithms offer many different possibilities to optimize its performance, like parameters of membership functions, due to that it can certainly be expected that fuzzy image enhancement techniques can be applied in many areas of medical imaging in future.