Total E&P Indonesie (TEPI) currently produce Â±1600 MMSCFD of gas from 5 major gas fields, which are Tunu, Sisi-Nubi, South Mahakam, Peciko and Tambora. Except South Mahakam and Sisi-Nubi, all other fields are mature and already in declining production. On some very sensitive gas wells, there have been liquid loading problem observed, a phenomena of inability to continuously lift liquid from borehole. The accumulated liquid increases hydrostatic pressure and eventually stop the well production.

As a solution, TEPI introduced a “Foam Assisted Lift (FAL)” technology in 2011 as a pilot phase, and continued in 2012-2013 on more wells part of FAL trials. The principle of FAL is to generate bubbles to reduce hydrostatic pressure, through surfactant injection from surface to down-hole using capillary string (CS) set under specific well intervention arrangement. Starting from the pilot phase, TEPI have performed several improvements and development of robust down-hole equipments, operation, and also the selection criteria of candidate wells.

Total E&P Indonesia (TEPI) produces Â±1600 MMscfd in 2016, it was decreasing sharply from 2010 which could produced Â±2000 MMscfd. One of the main challenges to maintain the plateau production of TEPI is the liquid loading issue which means the inability to lift liquid out from gas wells. This liquid loading issue triggers to self killing process as shown in Figure 1. In the beginning of well’s life, well produced in high gas rate and relatively dry. Through the time gas production decreases, water starts to be produced and less energy to lift the liquid. As the consequence, liquid will start to be accumulated in the borehole then eventually stop the well production.

Liquid loading issue would always happened in gas wells, it just only the matter of time. To minimize and longer well’s life, until recently TEPI performs regular offload by decreasing Well Head Flowing Pressure (WHFP) close to atmospheric pressure and flaring, involving substantial means such as testing barge and personnel. These offloading activities present specific risks, not only for safety, personnel, and assets, but also impact in environment from the flaring activity which results in Green House Gas (GHG) emissions. Moreover, this offloading is only temporary solution to boost the production. Therefore, a continuous offloading system is required to maintain the sustainability of production. Several technologies for continuous offloading are shown in Table 1.

Based on Table 1, the most possible technology to be applied is Foam Assisted Lift (FAL) through CS considering no energy required, comply with company rules, and less cost compare to others. Principal of FAL is by creating foam at down-hole to reduce the hydrostatic pressure at wellbore in order to help the lifting of liquid to surface. The process sequence of FAL is shown in Figure 2;

Technology FAL has been developed in TEPI in 2011 as a pilot phase and continued in 2012-2013 on more wells as part of FAL trials. Starting from the pilot phase, TEPI have performed several improvements and development of robust down-hole equipments, operations, and also the criteria of candidate selection.

CS down-hole system is an additional tubing (injection system) that inserted inside production tubing. Even though additional CS inserted inside, TEPI still complies and respects to safety by keeping down-hole safety valve (DHSV) installed. It is mandatory to equip subsurface safety valve in onshore and offshore wells in TEPI for safety purpose as second barrier if any damage or malfunction of surface system happened. Initially the DHSV opening and closing is controlled by hydraulic pressure from control panel but after equipped with CS down-hole system, the opening and closing is controlled by surfactant pressure from surface surfactant facilities.

DHSV in CS well is inserted or incorporated in a Weatherford Injection and Safety Hanger (WISH). The WISH hanger also locks the CS tubing, top and injection valve, and dual check valves as shown in the Figure 3. Dual check valves are used at top and bottom injection valve to prevent well pressure from production tubing entering the system in CS tubing and DHSV control line. Besides that, the purpose of dual check valves also to prevent reverse flow of surfactant or fluid s from wells which is potentially could cause plugging. Top injection valve installed immediately after WISH with purpose to pressurize and open DHSV at certain cracking pressure (Â±2000 psi) then it will allow surfactant to flow to bottom part of CS tubing. Bottom injection valve is installed at the bottom part of the tubing with purpose to inject surfactant inside production tubing.

Criteria that shall be considered during surfactant selection process are the foam efficiency and stability. Several laboratory tests have been performed to check and validate these two criteria. Qualifications of surfactant that been used in TEPI are as follow:

In the early phase on 2011, candidate of CS wells were selected based on the well’s behavior (stable or intermittent flow), offload frequency, turner rate, and response to shut in for pressure build up (SIBU). The preliminary step for candidate selection is the well’s behavior review before going in to deeper to the other criteria. A well that suffered with liquid loading could be identified by increasing of water production rate, and then followed by sudden decrease of gas production rate and decreasing of liquid lifted to surface that corresponding to the critical/ turner rate reached. The trend of WHFT also gives a good sign to do preliminary selection.

Figure 5 is one of CS well’s production evolution profile that selected based on the selection criteria above. As shown in the graph, the well still gave response to the offload that performed on October 2012 with high water production, Â±700 bwpd but in limited gas rate, Â±0.5 MMSCFD. This well clearly shown outflow problem as describes on liquid level column inside well based on pressure and temperature survey that given on Figure 6.

CS was installed on May 2013, but there was no significant improvement in gas production even it was clearly confirmed that the well has issue in liquid lifting. Existence of water and response to offload could not ensure the successful of FAL, cut off of gas rate required to ensure the agitation and mixing between liquid and gas needs to be defined as well. Besides that, the productivity of the well needs to be checked as well. As shown in the IPR and VLP curve, well with higher productivity will give higher gain in any changes on VLP shape.

Figure 7 is sample of CS well that have high condensate ratio in liquid, Â±80% of condensate in liquid. Based on the graph, gas rate production since October 2012 shown decreasing trend but still responsive to SIBU and offload (Qgas rate offload on August 2013 gave value Â±1.5 MMSCFD). Considering the initial selection criteria, this well was a good candidate for CS, but after installed with CS, there was no significant improvement. Unsuccessful result potentially caused by the existence of high condensate rate. Since surfactant that used as FAL is water base, it would create foam if only water exist in the certain composition. If liquid consist more condensate, foam will not be created and the impact potentially will give additional back pressure to the well itself.

Well in Figure 8 was installed with CS since August 2013. As shown in the graph, even though the well shown positive response in offload (Qgas rate at Â±3 MMSCFD) and mainly produced water instead of condensate, the result after CS installation did not show positive improvement. Reviewing further from reservoir point of view, this well indicated a good productivity but the pressure (BHSIP) has been at low value.

Based on the result on CS wells that selected based on criteria above (conventional approach), found that criteria above were still not capable enough to give higher success ratio. As in cases above, several parameters should be included in the selection process, such as productivity, response to offload, condensate liquid ratio, and BHSIP. Statistical approach has been performed to define the new selection that could give higher success ratio. Based on the review, parameters or criteria that could improve the success ratio are as follow:

FAL by surfactant does not bring any additional energy to the system. The well itself should be able to revive by itself in order to activate the foaming effect efficiently and effectively. Therefore, response to the offload is important to confirm CS candidate prior the installation. Good candidate for CS shall have an improvement in gas rate and liquid production at atmospheric pressure compared to LP. Based on review in existing CS wells, cut-off value to confirm candidate CS that implemented in TEPI is 1.3 MMSCFD in offload condition.

Condensate is natural killer of foam. It would collapse the existence of foam. Based on laboratory test, minimum of 40% water in the liquid is still sufficient to create effective and stable foam. Therefore, the ratio of condensate and water needs to be considered as well during the selection candidate process.

BHSIP value could be used to represent reservoir pressure. Therefore, candidate for CS wells shall still have high BHSIP, it would not be too depleted reservoirs. Even though BHISP is used as one of the criteria, needs to be careful in the selection process since higher BHSIP could be also due to higher liquid column.

Case 4 – Well that Selected Based on New Selection Criteria

New selection criteria that are included the cut-off productivity, gas rate during offload, condensate liquid ratio, and BHSIP have been fully implemented in 2015. TN-H13 is one of CS well that already selected based on this selection criteria.

As shown in Figure 9, Production trend from point A (February 2014) to point B (May 2014) shown decreasing trend and limited water lifted to surface. In the end of May 2014, after reviewed based on new selection criteria, well gave significant improvement in gas rate after installed with CS. Gas production from point B (Â±0.7 MMSCFD) increase to point C (Â±2.5 MMSCFD) and then gave stable production. Good response to the FAL technology also given by the increasing of water rate that could lifted to surface.

These new selection criteria have been fully implemented in 15 wells along 2015 and gave production improvement in 10 wells.

As part of learning process, beside define the new selection criteria, the impact of surfactant injection rate on reduction of BHFP needs to be evaluated as well. The method to evaluate this BHFP reduction is by installing memory gauge at the edge of CS tubing. Total memory gauges installed are 5.

TN-H13 is selected based on the new selection criteria and it gave positive result in gas production after installed with CS. Positive impact on the gas production could be explained in Figure 10.

The authors gratefully acknowledge permission from SKK MIGAS, INPEX, and TOTAL to publish this paper. Our biggest gratitude is also gives to all parties who provided valuable comments and inputs during the preparation of this paper. 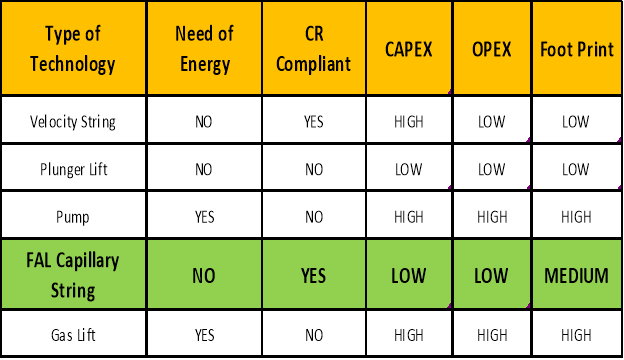 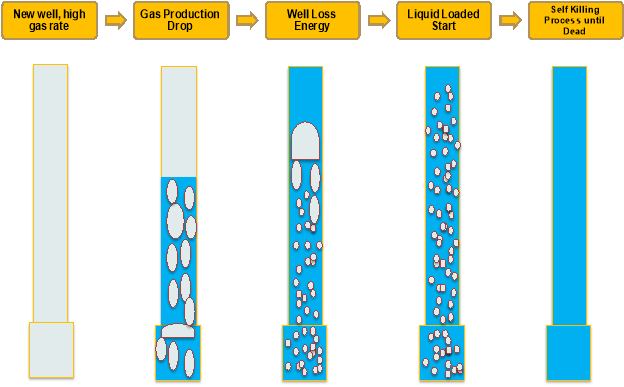 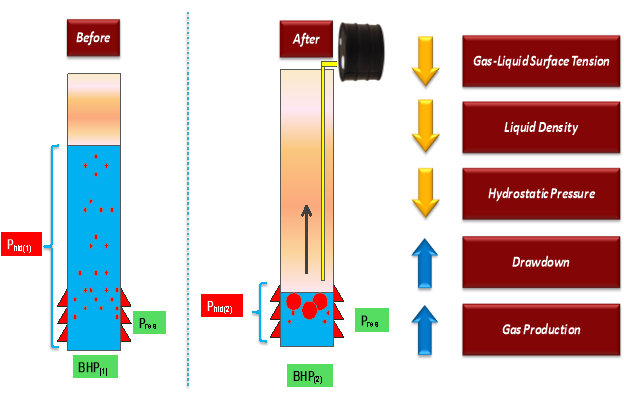 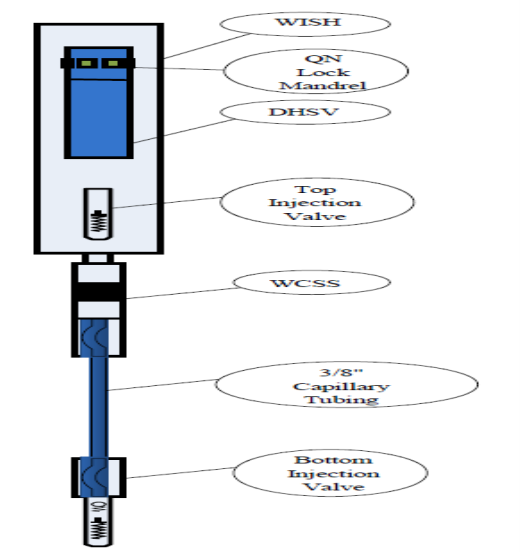 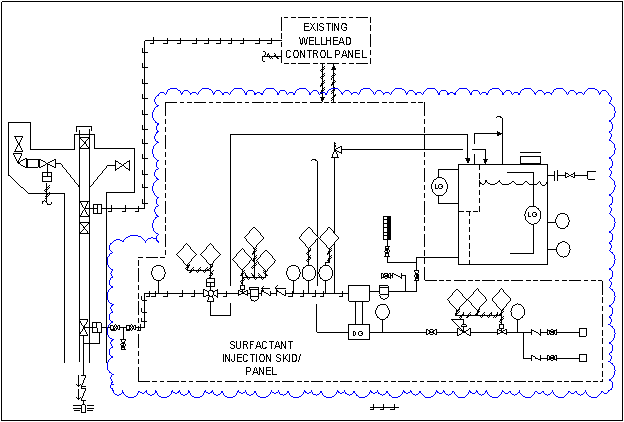 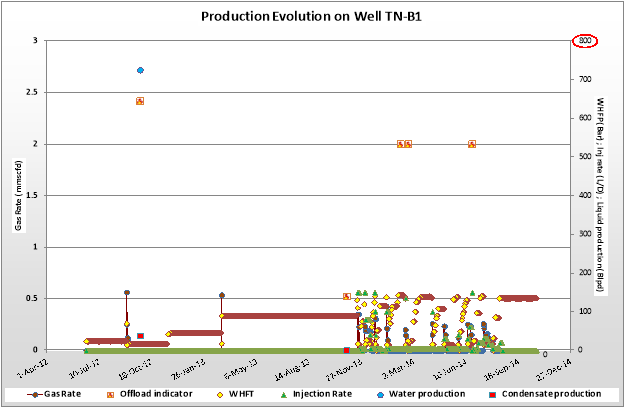 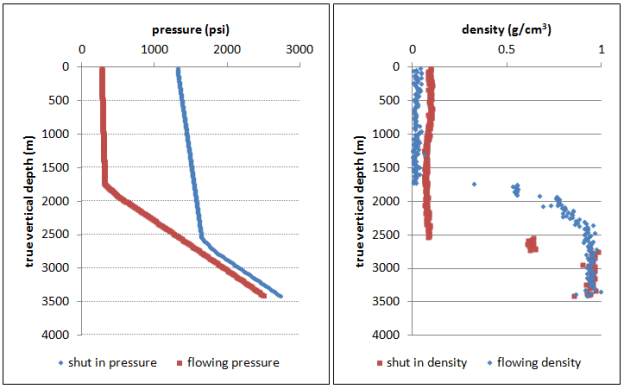 Figure 6. Gradient Pressure in Shut in and Flowing Phase of TN-B1 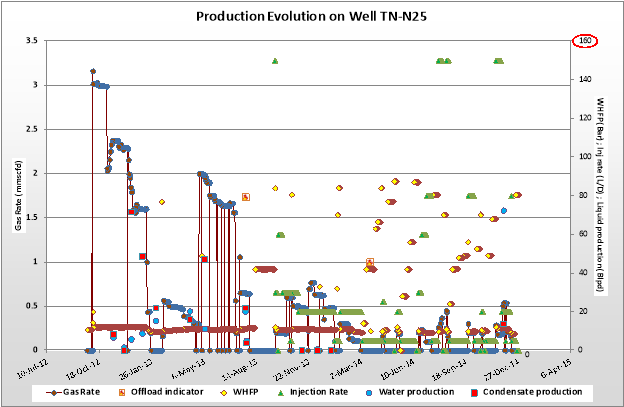 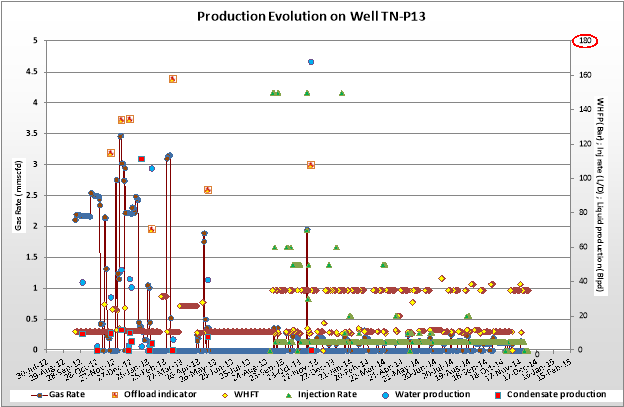 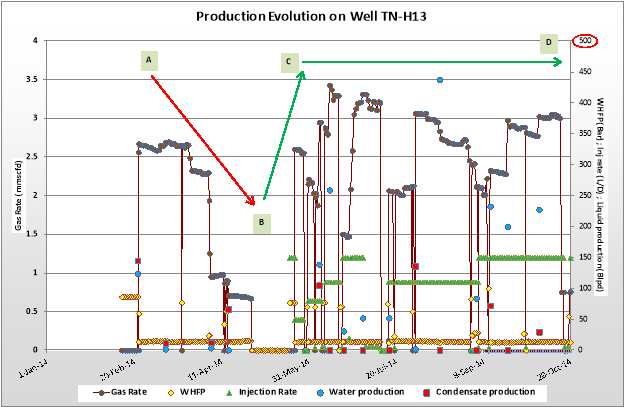 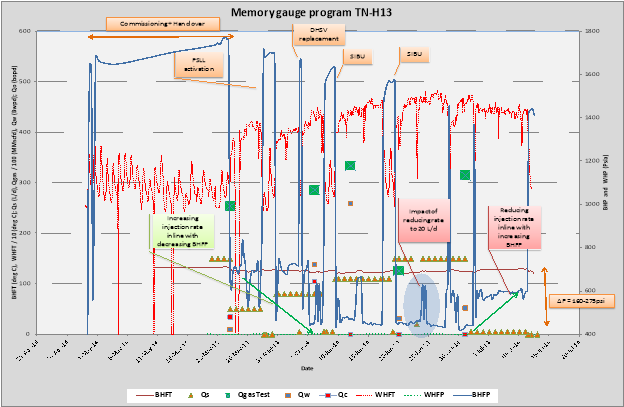