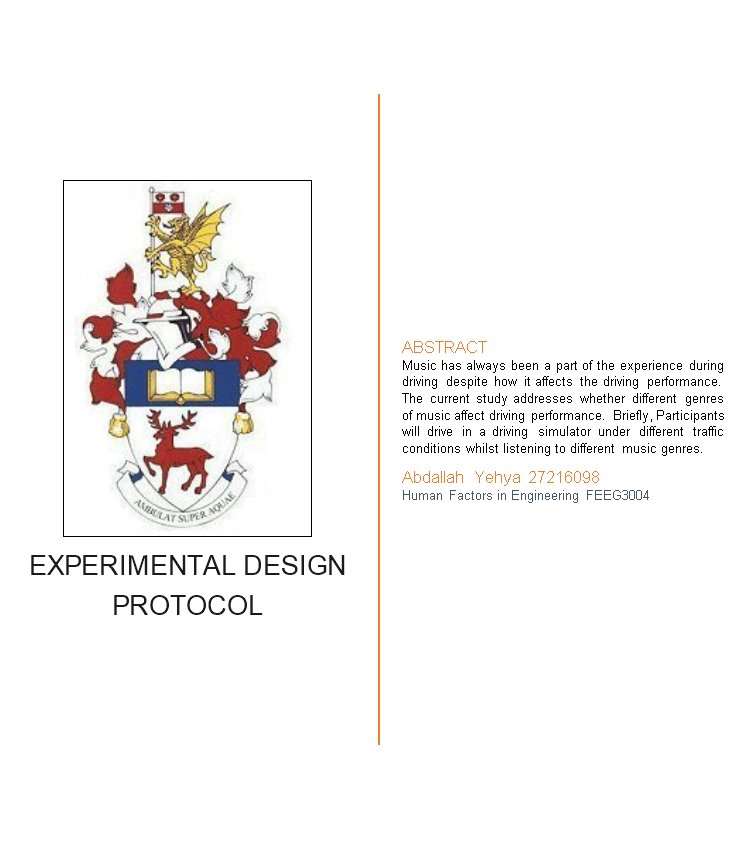 Research shows that listening to music is mostly common in an automobile (Wikman et al., 1998). Moreover, compared to other activities that might cause a distraction, there is a popular misconception that listening or singing to music while driving on the road causes “little-to-no-risk (Dibben and Williamson, 2007). Several types of research and experiments have studied the effects of music on the performance of the operator in different controlled environments and under different conditions (Beh and Hirst, 1999; Baldwin and Coyne, 2003). On one hand, research has continuously supported the idea that under certain conditions, listening to music does increase alertness by countering sleepiness when driving (Braitman et al., 2008; Bellinger et al., 2009; Brodsky and Kizner, 2012). Experiments have also shown that music played close to a person’s comfort volume level (72 Dba for male and 66 dba for female ) will induce faster reactions to signals (Turner et al., 1996).

On the other hand, listening to music accompanies several behaviors that take the driver’s attention. These include changing songs, scrolling to a playlist, fine-tuning a radio station, and swapping CDs which directs the driver’s eyes away from the road and leads to single-handed driving (Horberry et al., 2006). Listening to music while driving might also have another drawback as it will cause less auditory acuity for the sound of the music caps road noises (e.g. sirens, horns, vehicle warning signs) (Consiglio et al., 2003; Brodsky and Slor, 2013). This would considerably decrease the operator’s overall awareness of a situation (Lee et al., 2012). Additionally, momentary loud peaks in music disrupt vestibulocochlear control leading to a decrease in the reaction time of the driver thus increasing the risk of collision (Wikman et al., 1998). An important note is that previous research showed that some music genres like Pop, rock, and dance contain more frequent peaks in the tracks than other genres like classic, vocal, and rap (Hughes et al., 2013). Moreover, research has shown that the driver’s perception of moving objects can be altered based on the pace of the background music (Brodsky, 2001). Furthermore, research done at the University of Negev in 2012 showed that although drivers that listened to their favorite music songs had elevated positive moods and enjoyed the trips, they exhibited more steering inaccuracies, aggressive driving patterns, and traffic violations compared to drivers that listened to songs they are not familiar with (Brodsky and Slor, 2013).

A lot of research have considered effects of music based on its familiarity with the driver (Cummings et al., 2001), loudness (Ayres and Hughes, 1986), and pace (Iwamiya, 1997). Music genres are mainly categorized into Pop, Rock, Dance, hip-hop, and Rap (Ünal et al., 2012). This categorization is based on the most popular music for individuals aged between 16 to 30. To our knowledge, there is no research that tests whether the effects of different types of music genres on driving performance(Oron-Gilad et al., 2008). The aim of this study is to test if there are any different effects of genres of music on the driver performance. The objective is to set the genres that enhance the driver’s performance and the those that predict the worst outcome.(Ho and Spence, 2005; McEvoy et al., 2006)

In this research, we seek to study the effects of the 5 different genres presented earlier on driving performance while controlling all other effects of in-cabin music like volume, familiarity, pace, and tempo.

Hypothesis 1: Given that Pop, rock, and dance music have more peaks/climaxes than other music genres, we predict that they will have a negative effect on the performance.

Hypothesis 2: On the other, we predict that listening to hip-hop and rap will have a positive outcome when it comes to the driver’s performance.

The proposed project will be a multivariate experimental design.

The first independent variable in this study is the type of music the driver is listening to. These include 5 different genres compare to a control situation, which is when the driver is not listening to any music. 20 popular tracks (4 for each genre) will be chosen to be played during the experiment. The tracks will be chosen from a website called Grooveshark (Grooveshark.org) which contains top charts from each genre. The choice of tracks is very important to this experiment since as mentioned above the pace/beats per minute (BPM) of a song, and familiarity does affect the driving performance, thus all the tracks were chosen should have 120-125 BPM rate and should popular so that every participant will know one of these three tracks.

The second independent variable will be the type of incident the driver must respond to. For the current study, a simulated world of the roads in London was created. The setting is intercity roads and highways. Incidents that the participant will face were designed specifically to mimic the possible scenarios that a London driver would experience (National Survey, 2016) they are characterized by 2 groups :

The dependent variables will be mental effort value and the driving performance. The former will be assessed using The Rating Scale Metal Effort (value from 0 to 150 where 0 indicates no effort and 150 indicates extreme effort) (Zijlstra, 1993) at different intervals during the study . In a series of studies by Zijlstra demonstrated that the scale is sensitive to changes in task load and correlates well with physiological changes based on task difficulty. Therefore, the scale is a valid and reliable measure for subjective ratings of mental effort, and an indicator of workload and information processing during the driving task.

The experiment requires 85 participants that should have the following requirements:

Participants will be selected to ensure a representative sample of the population in London. The ratio gender and age should be statistically similar to the drivers in London. According to the national transport, survey done in 2010, the gender ratio was 58% males and 42% females, and the mean age was 40 years. Finally, upon completion of the study, the participants will be rewarded a 20£ amazon voucher.

All participants will be given a detailed information about the experiment prior participation and will be asked to sign a consent form. This document will include the risks and potential benefits, information about the researcher, and ERGO contact information. Also, the consent form will inform the participants that they have the right to drop out of the study at any stage, and withdraw their data after the study have been completed with no negative impact on them. The study will only be conducted with the approval of the ERGO committee at the University of Southampton. Finally, the participants will be each given a number that will be used in all data logging, questioners, results, and reports so that participant confidentiality is preserved. All soft data will be kept on a secure hard drive and all hard copy data will be kept in a locked cabin under the supervision of the principal investigator.

Participants will go through all highway and intercity incidents twice (6 incidents as a control with no music, and another 6 with different music genres playing in the car).

When the participants arrive, they will be debriefed and then guided through consent form. Once the participants agree to join the study, they sign the consent form. After that, they will undergo a 3-minute online Hearing deficiency test designed by the Royal institute of Deaf People (www.actiononhearingloss.org.uk) to check for any hearing deficiencies. If they pass the test they will go through a 10-minute training session in the driving simulator so that they will get to know the driving simulator. If the researchers observed any participants having simulation-sickness they would exclude from the experiment at this point. Moving on, the participants will choose 5 songs (one from each genre) that they are familiar with, and they will be informed that they should respond with a single value from 0 to 150 when a research asks them about their mental effort during the driving task.

To achieve a controllable environment a couple of measures will be taken. Firstly, the only songs played to the participant are the ones he/she chose before he started the driving simulation.Secondly, the music will be played at a moderate sound level throughout the experiment (72 Dba for male and 66 dba for female ) to exclude any effects of the different volume levels on the driver’s performance. Thirdly, road noises simulated road noises will not be played during any of the tests because the research is solely interested in the effects of different music genres on driving performance.

A pilot study will be conducted prior to the main study to ensure all the information given to the participants are clear. In addition, a pilot study will allow the researchers to address any possible factors that might affect the outcome and thereby produce a non-replicable result. The pilot will be made up of 10 individuals who will go through the whole experiment and afterward sit with the researchers and address their concerns in a focus group. The feedback will be taken into consideration and the study procedure will be adapted to try to avoid any problem that might arise during the data collection phase.

Each incident will last 2 minutes, so each participant will be in the car simulator for an average of 40 minutes (including a 5-minute half-time). Including the debriefing talks, 10-minute training session, consent form, hearing test, and music selection music selection the whole experiment should last an average of one hour for every participant (Strayer et al., 2003; Sheller, 2004; Patel et al., 2008)

The experiment will be done in the Southampton University Driving Simulator (SUDS) with a 135-degree field-of-view which contains a Jaguar XJ saloon vehicle linked to the STISIM Drive simulation software, it has an interactive driving simulator with three driving displays supporting a 135-degree driver field-of-view (University of Southampton Driving Simulator, 2016). 1000 Watt Panasonic speaker was used to play the background music that was linked to an iPod. A digital sound level meter was also used to measure the loudness of the music and keep the loudness level on 72 Dba for male and 66 for female participants.

For the driving performance monitoring, the SUDS will record specific values for each tone of the 12 of scenarios. The research will use relevant indicators used in other driving simulator experiments that test driver performance because of their effectiveness to portray the overall driver performance in each of the designed incidents.(Ünal et al., 2012)

The results will be analyzed using the MANOVA analysis. The two dependent variables will be mean values on the driving performance and mental efforts. The output of those will be compared across the 12 different scenarios. In addition, interactions between dependent variables will be analyzed (in the MANOVA analysis). Bonfornni posthoc tests will allow pointing where the exact difference is between the different scenarios. Finally the . SPSS version 24 will be used for analysis.

Baldwin, C.L. and Coyne, J.T. (2003) Mental workload as a function of traffic density: Comparison of physiological, behavioral, and subjective indices Proceedings of the Second International Driving Symposium on Human Factors. 19-24.