The overall program goal is to investigate, develop, and demonstrate low-friction, environmentally-friendly and commercially-feasible lubricant formulations that would significantly improve the mechanical efficiency of modern engines by at least 10% without incurring increased wear, emissions or deterioration of the emission aftertreatment system.

This study is motivated by the need to improve fuel economy and reduced harmful emissions from diesel internal combustion engines. Reducing wear and oil change intervals are related motivations. Options for improving fuel efficiency and emissions are many, and already fill volumes. This study focuses specifically on the engine lubrication system. Common to all internal combustion engines, the lubrication system serves two primary purposes, reducing friction and controlling engine wear and corrosion [1] . Friction reduction has a direct benefit on fuel economy, as mechanical efficiency is on the order of only 90% for today’s engines.  Migration of oil to the exhaust stream due to oil consumption has a significant impact on emissions, allowing for gains through proper formulation. This proposal summarizes results contained in several works that will be developed over the course of the research.

The estimated places diesel fuel costs at 25-35% of total haulage firm overheads [6]. In 2011 the first U.S. medium and heavy-duty vehicle fuel efficiency standards were announced, affecting 2014-2018 model years, with a goal of efficiency improvements for combination tractors of 20%, and up to 15% for heavy duty pickups [5][6][7].

Mechanical efficiency is a measure of that portion of the gross indicated power used to do useful work. It is the ratio of the brake power to the indicated power as defined in [1]. A thorough discussion is also provided in [2]

Engine durability is directly related to lubricant composition and aging. When lubrication problems occur, it tends to be due to the entrainment of combustion products and lubricant degradation. While lowering viscosity is of great benefit for fuel economy, failures may result from increased wear due to metal to metal contact. The valve train is often considered the most vulnerable subsystem for such contact; however, the power cylinder may also suffer from significant wear.  Excessive soot is known to cause wear and subsequent failure in valve trains. Recent studies show that soot plays a significant role in wear in low viscosity applications [6].  Such failure concerns are the motivation for many valve train durability tests in oil API category certification. Valve failure may also occur due to corrosion of the valve from the combustion or head side of the valve. In a dual loop lubrication system protection from valve stem corrosion may be achieved if acid levels in the lubricant are reduced. Valve train parts not exposed to the combustion chamber should receive greater protection. Deposit buildup and, or, corrosion on the valve stem or tip may also develop from degraded lubricants. Wear, pitting, and scuffing are of concern for cam lobe and follower wear as well.

In this study the term ‘conventional system’ is used to describe a system with one pump delivering lubricant to all subsystems as is typical of current engine designs for which a common system serves the valve train and crankcase subsystems. While a useful hardware configuration, it creates lubricant design tradeoffs. Recent implementation of emissions aftertreatment systems increased the impact of these tradeoffs [9]. Splitting the lubrication system may decouple some of these requirements as discussed in [2] in terms of axiomatic design principals. This provides opportunities for reduced friction, emissions, and overall oil dependency. The term ‘dual’ or ‘split’ system is intended to describe an engine lubrication of atypical design for which the valve train and power cylinder subsystems have separate lubrication loops which do not interact. The term ‘split’ or ‘segregated’ may also be used more broadly to describe any configurations for which one part of the engine’s lubrication system is segregated.

The experimental studies in this work will relate to a particular small diesel engine with a crankshaft driven mechanical oil pump which draws oil from the main engine sump and delivers it to the main bearings and the valve train camshaft journal bearings and rocker arms by way of a single oil filter. The oil lubricates other components in the engine by splashing. Oil is delivered to camshaft journals and rocker arms by pressurized passages. Other valve train components are lubricated by splash. A schematic of the system, modified from the Kohler shop manual, is given in Figure 4. The subject system differs from many automotive engines in that it has a belt driven camshaft. Many engines employ a chain driven camshaft, or a gear box, with lubrication draining back to the main sump. 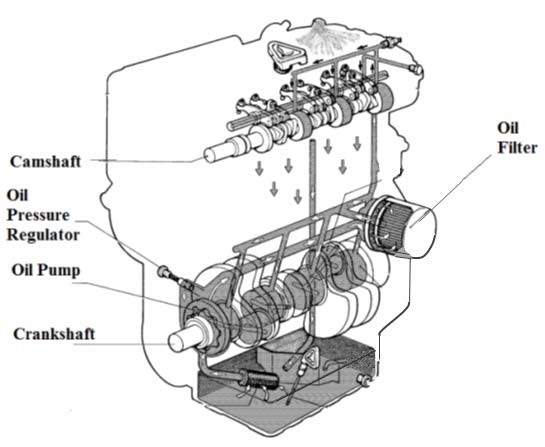 Typical automotive lubricants consist of base oil and an additive package. The base oil accounts for roughly 75-90% of an engine oil formulation by mass. Viscosity modifiers, if used, account for approximately 10% of the total formulation. The rest of the additive formulation consists of the detergent inhibitor (DI) package and other additives, with dispersants accounting for 6%, antiwear 1.5%, and detergents 3.5% [13]. Additive impacts, other than the viscosity changes from viscosity modifiers, may have a limited effect on overall fuel economy as compared to viscosity changes This is likely due to the significantly greater portion of friction that is attributed to hydrodynamic losses in the power cylinder system as will be discussed. Additive optimization is expected to have greater impact on valve train friction [13]. A more thorough discussion of base stocks and additive packages is presented in [2].

Significance of Study to the Oil and Gas Sector:

Offshore applications of thermal fluid heating systems can be employed in a wide range of offshore applications such as edible oils, reactors, heat tracing, heat exchangers, as well as fuel, cargo and tank heating.  Heating press platens, including OSB and plywood presses, laminating presses, rubber and plastic molding presses and circuit board presses

Heating chemical, petrochemical and other process equipment such as reactors, heat exchangers, dryers and evaporators

It can be also be develop as a customized solution to meet the requirements of any indirect heating applications for:

The following will the accomplish at the end of the research:

This study is motivated by the need for improved fuel economy and reduced harmful emissions from diesel internal combustion engines. Reducing wear and oil change intervals are related motivations. Options for improving fuel efficiency and emissions are many, and already fill volumes. This study focuses specifically on the engine lubrication system. Common to all internal combustion engines, the lubrication system serves two primary purposes, reducing friction and controlling engine wear and corrosion [1]. Friction reduction has a direct benefit on fuel economy, as mechanical efficiency is on the order of only 90% for today’s engines.  Migration of oil to the exhaust stream due to oil consumption has a significant impact on emissions, allowing for gains through proper formulation.

The majority of power cylinder friction is determined to be hydrodynamic in nature. This is shown extensively with modeling results, as well as experimental results on a 16 hp twin cylinder diesel engine.  Measured friction reductions corresponded to reductions in hydrodynamic friction anticipated as a result of reduction.  The use of conventional friction models, with detailed consideration of parameters in modern heavy-duty diesel engines, indicated different functional requirements may exist for different portions of the cylinder liner. Friction along the liner due to ring and skirt travel was shown to be predominantly hydrodynamic, particularly in the presence of low cylinder pressures loads against the top ring. The exception is that boundary loads, and therefore wear concerns, are greatest near TDC. Opportunities exist to reduce friction and wear through in situ control options such as the use of Thermal Barrier Coating (TBC) as well as tailored lubricant compositions aimed at taking advantage of the different requirements along the liner.

There may be considerable benefit to varying the ratio of light to heavy hydrocarbons, and even viscosity modifying polymers, to take advantage of the potential wear reduction benefits near TDC of the liner for a specific vaporization environment. First of its kind lubricant composition friction modeling indicated several opportunities for formulation improvement.  The dual loop lubricating system configuration facilitated an improvement in mechanical efficiency.

The dual loop lubricating system also allowed for improved mechanical efficiency by allowing the use of higher viscosity multigrade oils in the valve train and lower viscosity multigrades in the power cylinder, allowing for improved wear protection in the head. The hesitation to shift to lower viscosity lubricants in the engine is driven by wear concerns. Electrohydrodynamic pressures in the power cylinder subsystem should be lower than in the valve train.

[8]        Office of the Press Secretary, “Remarks by the President on Fuel Efficiency Standards of Medium and Heavy-Duty Vehicles | The White House,” The White House Press Office, Feb. 2014. http://www.whitehouse.gov/the-pressoffice/2014/02/18/remarks-president-fuel-efficiency-standards-medium-and-heavyduty-vehicl, Nov. 2014.