DELSTAR converter is an electronic system to be interfaced with the existing STAR – DELTA starter for machine tools. Induction motor consumes more power while it is operated at DELTA mode for a long time under no load condition. The proposed system gives the solution for the above stated problem. When the load on the motor is less than 40% of full load, it switches the motor to operate in STAR mode to save energy. When the load increases beyond 40%, it automatically switches the motor to operate in DELTA mode. The starting regimen is not disturbed. The proposed converter is recommended for applications where load changes are not too fast (not more than 120 times/hour). This can be used with any capacity motor by choosing appropriate current transformers (C.Ts) and setting the current level using the potentiometer built in.

Lathes will perform as many operations like face, turn, neck, taper, drill, bore, spin, file, polish, hone, buff, knurl, cut internal and external threads and cut off work. Relatively hard materials are handled by a metal lathe. For repetitive production of parts, turret lathes and capstan lathes are used. Induction motor of several HP is coupled with turret lathe and CNC machines too.

Induction motors are started normally with direct on line, but when large motors are started with D.O.L. starter, due to starting surge current, the supply line voltage is disturbed. To limit the starting surge current, reduced voltage is given to induction motors at start and then have full supply voltage when they run up to near rated speed. Comparison between the different starting methods of induction motor in terms of power quality is to figure out the reliable starting method which has the less power quality problems [5]. Efficient torque/current characteristics are provided by STAR-DELTA, industries prefer STAR-DELTA starters for their application. The large amounts of losses which occur at low speeds determine the users given by the wound rotor only for starting. The losses specific to the additional rotor resistor are quite important [3] while analyzing the performance of the induction motor.

Industries will operate three phase induction motors at delta connection mode since machine runs very efficiently when the machine under fully loaded condition. When the motor is loaded less than 40% of the full load, it runs under inefficient energy zone. So, the induction motor will consume more power from the supply side during partially loaded condition. In order to compensate the power consumption, the motor load is virtually added by connecting stator winding from delta mode to star mode. If the load on the motor is increased above 40% of full load current, winding connection automatically changes from star to delta for efficient operation. 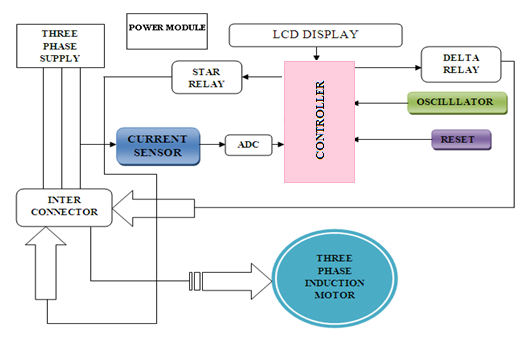 Motor draws more current than the full load at the time of starting, resulting in burnout of motor winding and / or starter. When DOL starter is used, because of high starting current, there is a big voltage dip in the electrical installation and therefore DOL starter is not suitable for higher rating squirrel cage induction motors. Significant energy wastage results reduced motor life. The system which exists is starting current reduction and the starters at the time of start of motor is star-delta starter. The STAR-DELTA starter is used at the time of starting only, not under running condition. The starter may be operated semi-automatically or fully-automatically. The semi-automatic operation is done by the push button switch. Fully-automatic starter is built with the timer which is used to change the STAR to DELTA connection after some predefined time. The both types of STAR-DELTA starter changes the winding connection from STAR to DELTA, and it is not possible to change the winding connection from the DELTA to STAR during running of induction motor. This problem is overcome by employing proposed starter with induction motor which changes the winding connection during both starting and running condition.

Hardware units are split into many sub units and each unit requires power supply to energize the circuit.

+12V SPDT relay and +5V SPDT relay were used here. So that relay requires +12V supply and +5V also for microcontroller unit. The LM7812 and LM7805 are the voltage regulators which is used to regulate the output voltage of the bridge rectifier in Figure 2. Then the output is again filtered with the capacitor. +24V power supply is used to energize the sensor unit. The current is sensed with the help current transformer with buffer unit to adjust the current setting. This circuit is designed with the help of LM317k voltage regulator in figure 3.

The microcontroller is to control the switching of STAR or DELTA relay while the motor is under the running condition. When the load is current is below the predefined value, the controller will energize the STAR contactor and if the controller input is high, it will activate the DELTA contactor. The input and output are enabled in the same port of the microcontroller. The pin 2 is enabled for STAR and the pin 3 is enabled for DELTA. The mode of operation is displayed in the Liquid Crystal Display. XTAL1 and XTAL2 are the input and output respectively of an inverting amplifier which is used as a crystal oscillator in the frequency range of 1.2 MHz to 12 MHz. The RESET circuit is connected with the microcontroller in pin 9 (refer Figure 5). 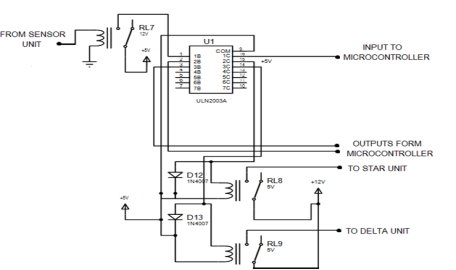 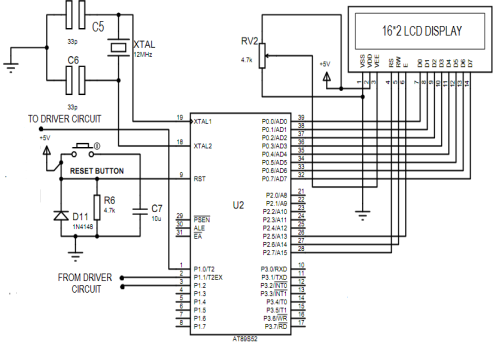 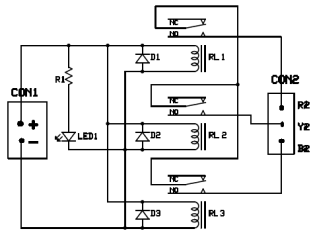 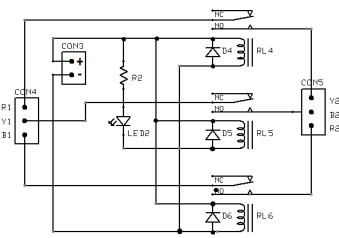 With the help of the above arrangements, the contactors change the winding connection from STAR to DELTA and DELTA to STAR simultaneously while the motor is under running condition. The LCD display unit will display the motor running condition and also the load current. LEDs are used to indicate the status of the relays.

The converter is tested with 5HP squirrel cage induction motor by conducting simple brake test in laboratory. The power factor is fairly good in delta mode compare to the star for the same current values of the motor. The performance of the induction motor is good in delta connection but only when the motor is under fully loaded condition. Under no load or partially loaded condition, the motor operated in inefficient zone since machine consumes more energy than star mode.

The table given below proves that the converter can improve the efficiency of the motor at the same time; it can reduce the energy consumed by the motor significantly.

The tests conducted on a 5 HP motor with a full load current of 7.9 amps, the energy savings on no load is 65.3%, reduction in operating current is upto 79.4%, reduction in demand 78.8% and improvement in power factor 60%. 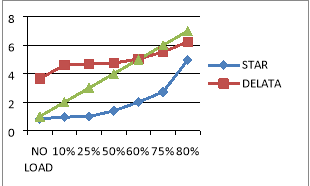 This work concluded that the star delta converter is very useful for all the kind of three phase induction motors from smaller rating to the larger rating, the converter can be designed accordingly. In the present days, the starters only used and it has low sensitivity. If the automatic star delta star converter is replaces the starter, the performance and life time of the motors will be increased. Since the converter can be operatable at the running time of the motor it reduces the losses in switching and during operation. The converter is designed with the small hardware units and it is very easy to install with the motors. Cost wise also the converters is very economical. This converter will reach the market with cheaper cost soon and reduces the energy consumption.