Corrosion, among others, is one of the main and considerable causes which is liable for the failure of the equipment and the material used in marine applications. Up to now, the majority of the materials that have been developed for marine applications are carbon steel, copper-base alloys, nickel-base alloys, titanium and apparently stainless steel and its variations such as super austenitic, duplex and super duplex stainless steel. (Meng, 2009) Last decade, the use of composites in maritime industry has also increased. (Jones & Summerscales, 2016)

One parameter, which influences the extent of corrosion on these materials is the water flow velocity, as a result of mass transfer and other incidents, such as erosion corrosion. (Scheers, 1992) For that reason, they are required to withstand to a wide range of velocities. 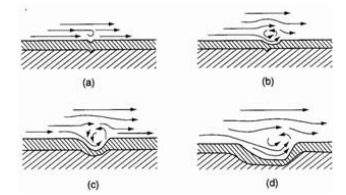 Water can be either static during shutdown periods or have movement. At low movement speed, the cathode reactants affect the rate of the erosion corrosion process. This most usually brings about higher rates of deterioration, but there are some cases – in the case of passive alloys, that this results in decreased rates. Furthermore, the provision of oxygen on the external surface of the corroding metal is extremely dependent on the water velocity. (Chandler, 1985) Oxygen can fuel the cathodic reaction in seawater which can also lead to higher corrosion rates. In conditions where the water velocity is increased, apart from the corrosion arising from the electrochemical process of corrosion, there is also mechanical action with much worse consequences. In other words, high velocity results in enhanced erosion corrosion of the components and the installation parts. The concentration gradients in the bulk of the fluid are destroyed by the turbulent conditions. The action which affects negatively the phenomenon of erosion corrosion appears in a very thin layer of the fluid which is bordering to the pipe wall. (Scheers, 1992) In addition to, there is also the impingement attack and cavitation corrosion which are more extreme forms of erosion corrosion. Conditions offering high water velocity can be found in tubes, pipes and rotating machinery.

On this dissertation, the effects of water velocity on erosion corrosion behavior of the materials that are used in marine conditions will be examined. Furthermore, the second part of this project will include the impingement of the water from different angles while the amount of the material loss during the impingement and electrochemical corrosion varies between different angles. Cathodic can be also applied, in order to investigate the effects on the erosion corrosion during the changes in flow velocity.

It is very important and crucial to know exactly the effects of velocity because the combination of the electrochemical reactions with the synergy of the mechanical reactions due to the impingement in aqueous environments can cause horrible failures of the metallic components used in industry (Meng, 2009) . In addition there is also great need to know the difference in the number and in the size of the pits while velocity is increased (Wing, et al., 2016), as long as materials have suffered and caused serious accidents before in the marine environment and in the hole marine society. Moreover, pipes are used everywhere in ships and offshore structures, so after the study engineers will construct them with bigger safety and reliability (Jin, et al., 2016).

The major aim of this project is the accurate plot of the corrosion rates, in comparison with the different flow velocities. What is more, one of the aims of this research is the determination of the difference on corrosion behavior between materials and compare the deterioration process and extent of erosion to them. In other words, erosion corrosion, might not be the same in all marine materials, therefore engineers will have a better indication of the effect on each on of them, because in conditions where high velocity occurs, as the dissolved oxygen controls the rate of corrosion in sea water (Larson & King, 1954) . It is still very difficult to choose the most optimum material for a specific job in the current working environment, selecting a more erosion corrosion resistant material. (Meng, 2009) The ongoing protocols for design and selection are extremely basic and are based on empirical service data (Neville & Hu, 2001).

Moreover, another aim is to compare the degree of electrochemical and mechanical reactions in changing angles. The durability of steels and cast iron and other materials will be further interpreted. Lastly, the removal of the protective oxide film in stainless steels might accelerate corrosion (Bonner, 2016)

Many water characteristics influence the rate of corrosion process, like Ph, dissolved gases, temperature, dissolved salts, but the one under consideration is the flow velocity.

The effect of velocity on corrosion is also Ph dependent. Seawater is alkaline and it is more at the base side 7.9-9.0 and carbonate ion concentrations increase as ph increases (Sabrowski & Silva, 2010). Therefore, in basic or alkaline water, the higher velocities have as a consequence enhanced supply of the cathodic reactant, oxygen. For that reason, the cathodic reaction is stimulated and higher corrosion rates take place, causing erosive damage to the metal surface (Hodgkiess, 2013).

According to (Meng, 2009), an increase on velocity has as a result the acceleration of corrosion on behalf of the motion of the fluid, as well as (Neville, et al., 1995) state that the reason of the increased rate of corrosion is the enhanced turbulence and the mixing of water on account of the supply of oxygen.

Furthermore, as Giourntas stats in his study (Giourntas, et al., 2015), stainless steels have the ability to abide high flow rates. However, in the presence of solids I seawater the persistence is decreased. It also states the application of cathodic protection as a very important feature.

As reported by (Neville, et al., 1999), with or without the absence of solids, the E corr drifts to more positive values, during the impingement.

As stated by (Neville & Hu, 2001), in places with high velocity and sudden changes in direction because of pimps, elbows in pipeworks etc. higher rates occur.

Moreover, as Weber reports in (Webber, 1992) the effects are divided in three categories at low flow velocity, medium and high velocity. In the first category, natural convention is responsible, while at the second corrosion increases but without any significant mechanical effect of flow. During high velocities, the damage mechanisms becomes very complex. In keeping with (Li, et al., 1994), erosion corrosion problems enlarge catastrophically but the outflow of water.

In agreement with Lin and Shao, with increasing impingement angles and velocities, the erosion is developing also. The rate of 1020 steel is lower than pure aluminum’s. During erosion conditions, many mechanisms act but only one or two of them is the principal mechanism. (Lin & Shao, 1990)

Concerning (Scheers, 1992), the simultaneous effects of velocity and ph have been investigated and turn out that in mild steel, there is an increase in corrosion rate with the velocity of flow, according to the ph value. Not to mention that, L. Wang notices that erosion corrosion increases rapidly with the development of the flow velocity at 14 m/s at 80% HR (Wang, et al., 2016). 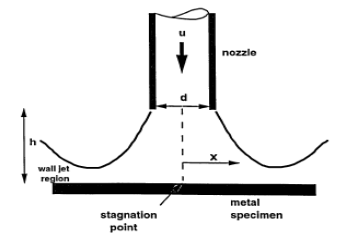 The dissertation of the effects of water velocity on erosion corrosion behavior of materials is mostly experimental. First of all, all available sources, papers and books will be investigated concerning erosion corrosion on materials that are used in marine condition. Furthermore, the effects of velocity and impingement angle will be searched. Relating the experiment, specimens have to be chosen. Possibly, only the major materials of maritime industry will be selected. These will have a cylindrical shape. Furthermore, those specimens will be placed in a recirculating rig as shown in the figure below. Afterwards, saline water will pass through a pump and therefore accelerate. Water will flow through pipes, where at the end of the piping system, a nozzle is installed, in order for the flow to take the exact preferable velocity. Nozzles will be changed. Directly vertical from the direction of the flow is the stagnation point. In the figure besides is a representation of the region where the liquid jet impinges to the solid material (Neville, 1995). The velocity depends on the diameter of the nozzle. Thence, water will impinge to the specimen causing erosive and corrosive damage. With the use of an equipment, the vertical impingement will change and erosive damage from different angles will be investigated. Afterwards, the exact amount of the material that has been degragated will be investigated through scale and metallography.

Li, Y., Burstein, G. & Hutchings, I., 1994. Influence of environmental composition and electrochemical potential on the slurry erosion-corrosion of aluminium. s.l.:s.n.

Neville, A., 1995. An Investigation of the Corrosion Behaviour of a Range of Engineering Materials in Marine Environments. s.l.:s.n.

Neville, A., Hodgkiess, T. & Dallas, J., 1995. A study of the erosion-corrosion behaviour of engineering steels for marine pumping applications. s.l.:s.n.

Scheers, P., 1992. The effects of flow velocity and pH on the corrosion rate of mild steel in a synthetic m;newater. s.l.:s.n.

Scheers, P., 1992. The effects of flow velocity and pH on the corrosion rate of mild steel in a synthetic minewater. s.l.:s.n.