Nanofluids has higher thermal conductivities compared to them base fluids [1-5]. Currently the use of nanofluids in thermal engineering systems such as heat exchangers [6-7], microchannels [8-10] , chillers, medical applications [11,12], and solar collectors [13].

Micro channel heat sink (MCHS) using in many applications, such as microelectronics and high energy laser. MCHS cooling is very important because heat flux in this channel higher than regular channel. Many studies analyzed the convective heat transfer characteristics of nanofluids in micro channel heat sink in recently many years ago[18-24].

Researchers presented different models for numerical analysis in multi-phase flows [37-40]. The mixture model is one of methods for nanofluid analyses [38-41]. In this study, flow is assumed steady state, incompressible and laminar with constant thermo-physical properties. The effects of body forces and dissipation are negligible. Also, for calculate the density variations due to buoyancy force was used the Boussinesq approximation. Considering these assumptions, the dimensional equations define as:

refers to Kelvin force; it results from the electric current flowing through the wire. In this equation, H is Magnetic field intensity vector that determined as [42]:

I is electric intensity. The wire direction is parallel to the longitudinal channel and in the center of cross section at the (a, b).

Also, M is the magnetization in Equation (2) and determined as [36]:

is magnetic susceptibility of ferrofluid at 4% volume fraction for different mean diameter is present in Table 1.

is called Lorentz force that determined as:

In Equation (10), Vm, and Vdr are the mean velocity and the drift velocity, respectively, that be defined as:

where Ï† is the volume fraction of nanoparticles.

The slip velocity is presented by Manninen et al. [31e]:

In Equation (15) f drag and r are drag coefficient and acceleration respectively, which can be calculated by:

In Equation (16), Rep = Vmdp/veff is the Reynolds number of particles.

The physical properties of water and Fe3O4 nano-particles are shown in Table 2. The water-Fe3O4 nanofluidis assumed is homogenous that the thermos-physical mixture properties calculated for 4% volume fraction of nanoparticles.

Table 2. Properties of base fluid and nanoparticles [35,40].

The physical mixture properties are calculated by means of the following equations:

Specific heat capacity of the nanofluid:

Based on the Brownian motion velocity is Thermal conductivity of nanofluid [44]:

dp and dbf are particle diameter(nm) and molecular base fluid (0.2 nm).

In Equation (23) Pr and Re are Prandtl and Reynolds number, respectively defined as:

Fig.1 shown the geometry of the microchannel heat sink with offset fan-shaped reentrant cavities in sidewall. The channel width and space between a pair cavity is 300 Î¼m.The channel length is 2.70 mm with a thickness of 350 Î¼m and the pitch distance of two longitudinal microchannels is 150 Î¼m.

The channel cross section heat sink has a constant width of 100 Î¼m and constant depth of 200 Î¼m andÂ  radius of the fan-shaped reentrant cavity is 100 Î¼m.

In this study for evaluate of effect the mesh points on the precision of the results, several grid sizes have been tested for the constant heat flux at Re = 300 are given in Table 3. The 1188000 grids is adequately suitable.

In order to validate this, the amount of mean temperature at the bottom of the microchannel compared by numerical result of Chai et al.[45](Fig.2). Also for comparison effect the magnetic field, the dimensionless velocity under the magnetic field compared by analytical results of Shercliff [46] that shown in Fig. 3 and can be seen a good agreement between results. 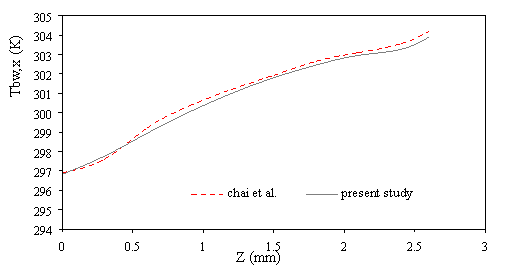 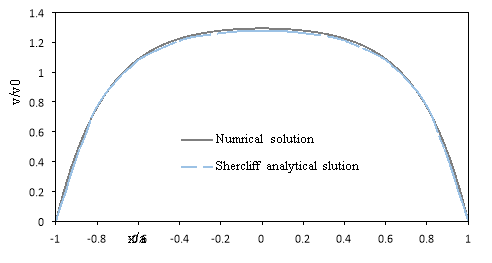 Fig.3 Comparison between numerical and analytical results for flow under magnetic field

The set of non-linear elliptical governing equations are solved by using the boundary conditions in the entrance of microchannel (Z = 0),

In the left and right sides of microchannel outer adiabatic walls (X = 0 & w):

In the microchannel inner walls: 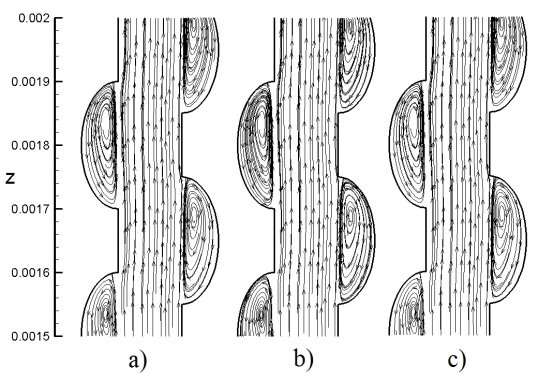 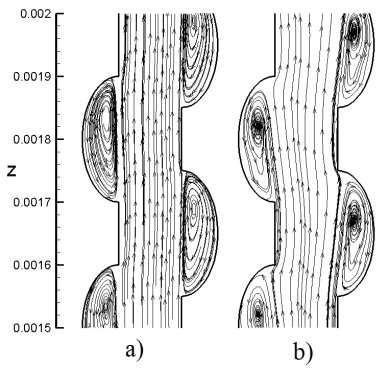