Abstract: The long last-stage blade is a key component of the steam turbine of nuclear conventional island. The die preforming process for a new technology that provides billets for near-net-shape roll-forging process was designed, the effects of the forging temperature, friction coefficient, flash land’s height and die’s outer fillet radius on the die forging force and forging energy were studied by using the orthogonal experiment method, the primary and secondary order of the four factors were analysed by using range analysis method, and the optimal combination of the factors was obtained. By means of numerical simulation and physical experiment, the die preforming process that can provide qualified billets for the subsequent roll-forging process was verified, and the PZS1120f electric screw press can meet the requirements of the die preforming process.

The long last-stage blade is the key component of the steam turbine of the nuclear power conventional island. The larger the exhausting area of the last-stage blade of the LP cylinder is, the higher the efficiency of the nuclear power unit is and the better the economy is [1]. Harbin Steam Turbine Factory had successfully developed a 72-inch (1829mm) half-speed nuclear power turbine blade [2], Shanghai Electric had also developed a 67-inch (1710mm) nuclear power blade [3], the development of these long blades effectively improves the efficiency of nuclear power unit, but it’s also a challenge to manufacture these long last-stage blades. At present, the technology of preforming and overall forging was mainly adopted by the domestic and foreign blade manufacturers [4, 5]. The radial forging and the open-die forging was adopted respectively by the foreign and domestic blade manufacturers as blanking process, and then, the overall die forging process was adopted to form the blades. Due to the large area of these blades, the capability of the blade manufacturers’ forging equipment cannot meet to the required forging force of producing the blades and the forged blades had got some defects, such as underpressing, underfill and overweight. The die preforming process that provides billets for a new near-net forming process for nuclear last-stage blades was proposed, the new process, which uses the roll-forging process to form the blade body of the long blades, the die forging to form the blade root, crown and damper, can effectively reduce the required forging force. In this paper, the die preforming technology of long last-stage blade was designed, the process parameters were optimized by the orthogonal experiment method and numerical simulation, and the feasibility of the process was verified by physical experiments.

The die preforming process was carried out in the PZS1120f type of electric screw press, the nominal tonnage of the press is 250,000 kN. According to the nominal tonnage, the maximal projection area of the forging billet was calculated. The forging force is not only related to the material and forging’s projection area, but also related to the strain rate, temperature, friction coefficient and die structure (height of the flash land and the outer fillet radius of dies). Because the strain rate is related to the forming speeding of the press, its value is determined when the forging press is chosen. The forging temperature, the friction coefficient, the height of the flash land and the outer fillet radius were chosen as the process parameters to be optimized and the forging force and forging energy were chosen as optimization objectives.

3D model of a preformed forging was shown in Figure 1, the forging model was calculated based on the press nominal tonnage and the forging drawing of the 72-inch blade, the calculation process wasn’t repeated here, it will be discussed in detail in the future article. The die’s structure was shown in Figure 2, it didn’t contain the groove of the flash, and the structure was quite simple, only the height of the flash land h and the outer fillet radius r were considered as parameters.

Orthogonal experiment method can be used to study the impact of multiple factors on the optimization objective by less number of trials, to obtain the best combination of factors for the optimal objective value. The forging force and the forging energy of the die preforming are related to the forging temperature A (T), the friction coefficient B (Î¼), the height of flash land C (h) and the outer fillet radius D (r). The four parameters were adopted as the orthogonal experiment factors, each factor took three levels, and the designed factors and levels table were shown in Table 1.

Table 1. Factors and levels table of the orthogonal experiment.

The billets used in the die preforming were produced in the semi-open heading process in ref. [6]. The shapes and dimensions were shown in Fig 3. The material is 1Cr12Ni3Mo2VN, and the constitutive relation of the material was from ref. [7], in the Arrhenius form and the hyperbolic sinusoidal was used.

The die was modeled as a rigid model with a preheat temperature of 200 Â° C and a forming speed of 400 mm / s. The forging temperatures and the friction coefficients were set according to Table 1.

Table.2 orthogonal experiments of simulation arrangement and the resultsã€‚

The value of Kjm was the sum of the result of the m factor at j level, and the means were represented by kjm, the value of kjm can reflect the optimal level. Rm was the range of the mth factor, the value of Rm reflected the fluctuation range of the optimal objective when the m factor fluctuated, the bigger the Rm was, the greater the influence of the m factor on the objective was. The primary and secondary order of the factors can be judged according to the range. The results of the range analysis of the forging force F and the forging energy E were shown in Table 3. 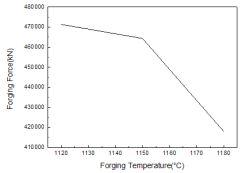 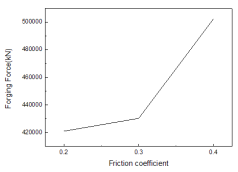 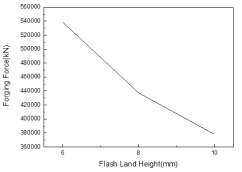 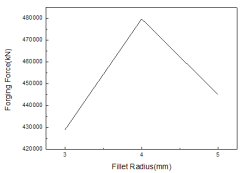 Figure. 4 Relationships among the forging force and factors 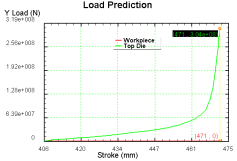 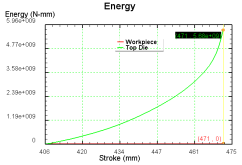 Figure.5 Relationship between stroke and forging force and energy

As shown in figure 5, the predicated forging force was 304000 kN and the forging energy was 5680 kJ by using the optimal scheme. Compared with the result of orthogonal experiment, it was found that the value simulated by the optimal factor and level combination was the smallest one.

Even if the optimal scheme was utilized, the forging force of 304,000 kN was great than the nominal tonnage 250,000 kN of PZS1120f electric screw press. In the live production, there would be some issues, such as the upper and lower die cannot be clamped, the forging would be underpressing and underfill. However, in order to ensure that forged billet has enough width and a certain length, to minimize the deformation along the width direction during the roll forging step, a few underpressing in the height direction would be allowed. The situation of die cavity filling while the forging force was 207000kN was shown in Figure 6, except the crown part of the outlet side, the rest of the billet was almost filled, and the value of underpressing of the dies was 2.7mm, this underpressing value would not have too much impact on the roll-forging of the blade.

Figure.6 Situation of die cavity filling while the forging force was 207000kN 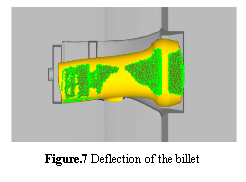 The reason that cause the outlet side of the crown was not filled was the billet deflected to the inlet side at the beginning of the forging (as shown in Fig. 7), resulting in a shortage of material on the outlet side and the flash at inlet side was too large (Figure 6).

The working force was set to the nominal tonnage of PZS1120f electric screw press, during the forging process, the first blow was to locate the blank’s position and to remove the scale, and then, the blank was forged by the next two blows. The final forging forces of the two forged parts were measured to be 223460 kN and 213690 kN respectively. The die preforming forgings were shown in Figure 9, two forgings had varying degrees of underpressing and underfill, the underfill of the crown part at the outlet side was more serious, and the flash at the inlet side was much large. With numerical simulation results, it can be determined that the reason of these defects was the blank’s deflection to the inlet side; some measures should be taken to prevent the blank deflection in the live production.

The flash land’s heights of the two forgings were measured to be 12.9mm and 12.8mm, the values of underpressing were 2.9mm and 2.8mm, because the forging force had reached the maximum tonnage of the press, it’s hard to clamping the upper and lower die by increasing the number of blows, and it would damage the press and dies. These defects can only be solved by the subsequent roll-forging process.

a) Upper and lower dies b) heading billets

Through the orthogonal experiment optimization, numerical simulation and physical experiment, the following conclusions can be drawn:

2) The qualified billets formed by die preforming process can be provided for the subsequent near-net-shape roll-forging process and the PZS1120f electric screw press basically meets the requirements of the process.

3) The billet was deflected during the forging process, resulting in the underfill of the crown part at the outlet side, some measurements should be taken to prevent the deflection in the live production.