Light is a transverse, electromagnetic wave with a visible spectrum that can be seen by the average human and most animals. Light plays a vital role in our daily lives and has revolutionized medicine, technology, but still continues to be crucial to the cultural, economic and political aspects—essentially every aspect—of our global society. Thus, several careers exist in relation to the study of the wave nature of light, including electrical engineers, physicians, optical engineers, and laser engineers (Raines, 2016).

Optical engineers are the engineers who work in any of the many related subfields of optics: including physical optics (concerning the wave properties of light), quantum optics (concerning individual particles of light known as photons), geometrical optics (concerning instruments used to detect and measure light), integrated optics, nonlinear optics, electron optics, magneto-optics, and space optics, among other branches of optics. On a daily basis, optical engineers need to combine their knowledge of optics with other branches of engineering—such as mechanical, electrical, and computer engineering—to build devices and find applications using this optics technology. Examples of these devices include optical systems for cameras, telescopes, or other lens systems (pictured right), lasers, microscopes, as well as the circuitry and components for devices that make us of optical technology. Optical engineers, however, do more than simply build these devices. They are also required to test all the parts to ensure that they perform correctly, diagnose any malfunctioning parts, and correct all the defects. Optical engineers typically have at least their bachelor’s degree and often a master’s degree as well. These professionals tend to work across a wide variety of industries, including medicine, aerospace, computers, entertainment, lighting, and even agriculture. Jean-Angelo Beraldin (pictured right) is an optical engineer at the National Research Council in Canada. For his job, he designs and uses lasers to analyze various objects such as well-known works of art and historical artefacts to provide in depth knowledge on the history and background of these items. His responsibilities even include developing laser scanners for companies like Boeing who design planes and NASA who use the lasers to inspect their shuttles for defects. He once even spent two nights analyzing the Mona Lisa outside of its bulletproof glass case using his lasers—which were smaller than the diameter of a hair—to take pictures of every crack and brushstroke of the painting. After scanning the painting, he used computers to assemble the pictures into 3D models for researchers to manipulate and study, providing additional historical context and information on the painting: the resulting computer models showed everything from its colour and surface texture to the shape of the wooden plank that Da Vinci painted on (Rutger, 2008). 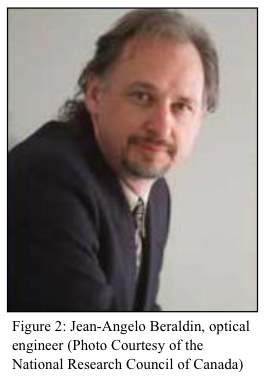 On NASA’s International Space Station, a large ‘blanket’ of solar panels use the wave nature of light to directly convert sunlight to energy in the form of electricity (pictured left). Solar panels are a technological device—used both on Earth and in space—that use the sun (a renewable resource) as a form of energy. Solar panels are comprised of several linked photovoltaic cells which turn sunlight into direct current (DC) electricity. An inverter then converts the DC electricity into alternating current (AC) electricity. This AC electricity can then be used, stored in the grid, or even stored as a battery (Dhar, 2017). Solar panels are most often arranged on a building or concentrated in solar farms that have easy access to sunlight in order to facilitate the reaction that converts the sun’s light radiation into usable electricity. The first solar panel was created in 1839, after Alexandre Edmond Becquerel discovered the photovoltaic effect: explaining how electricity can be generated using sunlight. Since then, this technological device has had numerous societal and environmental impacts. In our modern society, solar panels have become increasingly common, as they are essentially more sustainable replacements for traditional versions of energy generation. Their cost depends on the number of panels that are installed and the location of installation, however, are relatively cheap and are becoming cheaper over time (as they are being used more frequently). Additionally, solar power can be scaled for numerous purposes: whether it be on a small scale for a single household, or on a large, industrial scale to power large factories or power plants. Due to the fact that the sun gives off far more energy than will ever be needed, this is considered a sustainable and highly renewable resource, with the only limitation for individuals being their cost. Over the next few decades, however, the cost of solar panels is expected to decrease as demand for them increases, and thus, overall, solar panels benefit both our society (in terms of the economy and providing energy) as well as the environment (as a sustainable, renewable resource).