This career episode reflects a brief summary of my contribution towards the successful completion of the project which I did in my 8th semester of my bachelor degree in Biomedical Engineering at Netaji Subhash Engineering College, Kolkata, India and how I managed the technical problems to the best of my knowledge. I ensured that I have provided genuine information and also ensured that I have mentioned every point of my experience.

The main aim of this project is to design and implement the Galvanic Skin Resistance.

Major areas of my responsibilities were as follows:

Based on my knowledge, I applied the ideas and concepts to forecast how to accomplish the project. My plan involved determining where to place the components and how to connect them, determining the size of the components used, subject to performance criteria such as the grade of service. Initially, I collected the substantial amount of information that provided me with sufficient knowledge required to commence the project work.

During this project, I studied skin conductance also known as GSR, EDR, PGR, SCR and SCL is a method of measuring the electrical conductance of the skin, which varies with its moisture level. The sweat glands are controlled by thesympathetic nervous system,so I used skin conductance as an indication of psychological or physiologicalarousal. I did research of electro dermal activity and dealt with spontaneous fluctuations or reactions to stimuli. Our device measures theelectrical conductancebetween 2 points and is essentially a type of ohmmeter. When correctly calibrated, the skin conductance can measure these subtle differences.

I checked there is a relationship between sympathetic activity and emotional arousal, although one cannot identify which specific emotion is being elicited. We calculated the resistance instead of impedance it’s measured in ohms and may includeresistance (R),inductive reactance(XL), andcapacitive reactance(XC). I used Resistance concept for DC (direct currents) whereas impedance is the AC (alternating current) equivalent. I considered the galvanic skin response (GSR) feedback instrument measures skin conductivity from the fingers and palms. I used GSR feedback in the treatment of excessive sweating (hyperhydorses), related dermatological conditions, relaxing and desensitization training. I used the polygraph or lie detector in police investigation which is especially used in the United States. The lie detector uses the galvanic skin response to determine if the subject is lying or not.

I have undertaken the Hypnotherapy with a subject in hypnosis. A person who is hypnotized displays certain unusual characteristics and propensities, compared with a non-hypnotized subject. I used Hypnotherapy in relation to childbirth and sometimes used during pregnancy to prepare a mother for birth, childbirth to reduce anxiety, discomfort and pain. Since sweat gland activity is controlled by sympathetic nerve activity, I considered this measurement as an ideal way to monitor the autonomic nervous system. We described to underlie theelectro dermal response(EDR) to sympathetic stimulation.

Physiology of the skin

I considered the interpretation of skin conductance or skin potential requires some understanding about the structure of tissues and beneath the skin surface. I researched the most superficial layer is called theepidermisand consists of thestratum corneum, thestratum lucidum, thegranular layer, theprickle cell layer, and thebasalorgerminating layer. The surface of the corneum (i.e. surface of the skin) is composed of dead cells, while at its base one finds healthy, living cells. We increased the conductance results from the hydration of the corneum due to the flow of sweat across the duct walls. As a consequence the effective skin conductance can vary greatly, depending on present and past eccrine activity.

Later, I noticed that the loading of ducts with sweat can be taking place before any release of sweat from the skin surface or noticeable diffusion into the corneum. I noticed that the main function of the skin is to protect the body from the environment. One aspect is to prevent the loss of water by the body. However, at the same time, the evaporation of water as a means of regulating body temperature must be facilitated. I carried out the requirements by the stratum corneum as a barrier layer that prevents the loss of water to the outside except through the sweat glands, whose activity can be controlled. This in turn is mediate by the autonomic (sympathetic) nervous system. I implemented the simple and basic concept underlying EDR and its application to psychophysiology.

I monitored the electro dermal response is associated with sweat gland activity is well established. And there are two major measures of the electro dermal response. I researched whether the measurement is of the (tonic) background level (L), or the time-varying (phasic) response (R) type. I exposed simple ideas that lead to a number of specific measures, each described by a three letter-abbreviation. I used abbreviations to distinguish the type ofelectro dermal measurements and Structure of skin resistance with equivalent electrical circuit. I suggested the epidermis that consists of keratin derived from dead cells of lower layers arranged in a flattened irregular fashion. When a person is tense or emotional, the sweat glands become more active, increasing moisture on the skin; this allows the electric current to flow more readily. I used this response in relaxation training.

I checked every IC should be supplied with positive and negative dc voltages of +15 and –15 volts respectively. We measured the output at the pin-6 with respect to the breadboard ground. Pins 1 and 5 are used for output offset voltage compensation. These two pins are not required for normal applications. 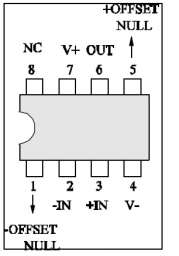 GSR Sensors was believed a lack of salivation was attributed to anxiety and therefore guilt with today’s technology. I checked there is no need for rice as biomedical sensors can measure skin conductivity from the fingers and palms to provide a modern mechanism to measure emotions. I understood theGSR sensoris highly sensitive to emotions in some people and can be used as a polygraph, or lie detector test.I used theS220 Galvanic Skin Response (GSR) Sensor tomeasure the psycho-galvanic reflex. This reflex generates a change in skin conductivity during periods of stress, excitement or shock. Galvanic Skin Response GSR sensor is just a cut 9V LEGO motor wire and some aluminum foil wrapped around fingers with tape. 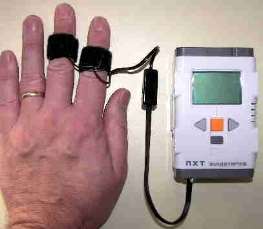 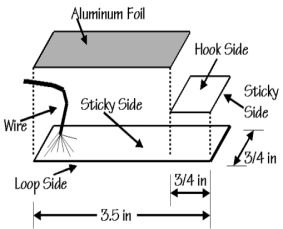 I considered the Shimmer GSR (Galvanic Skin Response) to monitor skin conductivity between two reusable electrodes attached to two fingers of one hand. We connected the Shimmer GSR to the Shimmer main board via the internal connector pin, and it’s contained within the Shimmer enclosure, with two leads connecting to the fingertip electrodes.

Our objective was to obtain a constant D.C current source from an A.C source. Initially the 220volt A.C power supply was allowed to pass through a Transformer. I used a step down transformer and obtained the desired output. It resulted in a stepped down current supply of about +-18volt which was in turn subjected to a bridge rectifier for rectification. We converted the voltage to current and I used two major integrated circuits IC741 and IC LM331. I involved the measurement of resistance or conductance between two electrodes placed in the demarcated region of the skin. I was responsible for tabulated the obtained results accordingly. From the obtained result, graphical interpretation was carried off and accordingly we carried out the calibration as per skin response.

The successful completion of this project provided me an opportunity to apply my theoretical knowledge into real time job application. I could accomplish this task successfully by studying every process of developing in detail with its specifications and implementation. I got positive approach and approval from guide for other projects. I had a meeting with the project guide and team members to understand the requirement. I had to complete this project within the given deadline based on the requirements.

Technical Difficulties faced by me

I faced some difficulties like the validity of this technique has been much disputed, because there is no way of knowing for sure that the stimulus provided by the researcher (the advertisement) was the cause of the response. Its proponents argue that it is more objective than research that relies on voluntary responses like interviews or surveys.

The other difficulties are Sources & causes of skin resistance and its properties were providing certain difficulties to be understood and counteracted.

Galvanic skin resistance, commonly called the GSR is the measurement of electrical resistance of skin. In the project we have produced a calibration curve by plotting frequency against the corresponding change of skin resistance. The errors that may have cropped up in the process such as Manual errors, Assumption errors, System and instrument errors, Ambient factors and external errors, Presence of sweat on skin and Presence Skin hair etc. We found the resistance of the skin by placing two electrodes on the epidermis and noting down the corresponding frequency. I checked the values from the calibration curve, the value of the resistance can be known. We designed a simple GSR was more or less successful as the practical results were very close to the theoretical values.